Russians were at the top of the foreign visitors’ list, followed by Germans, Iranians, Saudis and U.S nationals, according to the governor.

Istanbul made a good start to 2022 after a very poor tourism activity in 2020 due to COVID-19-related travel restrictions and other measures, which plunged both the number of visitors and tourism revenues, said Aydın Karacabay, head of the hotels’ commission at the Istanbul Chamber of Commerce (İTO).

In the absence of major problems, tourism activity will remain robust all year round in Istanbul, according to Karacabay.
“Hoteliers in the city are happy with strong bookings for 2023. The number of foreign tourists is likely to increase significantly in the first quarter,” he said, adding that hotel prices in the city are expected to increase by 20 percent next year.

Room fares, which declined to 70 euros during the height of the pandemic, at Istanbul hotels are presently 120 euros on average, Karacabay added.

“Prices are still not at the desired levels, but the current prices are acceptable for holidaymakers from western countries.”

He links the expected increase in tourist arrivals in the coming months to the release of the pent-up demand, saying that many people could not travel before due to the pandemic.

Karacabay, however, predicts a slowdown in tourism activity in 2024.

He voiced confidence that Istanbul could attract as many as 30 million tourists.

“Most of the visitors are currently from Europe with German and British tourists on the rise. People from the Middle Eastern countries also continue to come to the city,” he said but noted that tourist arrivals from Russia and Ukraine dropped to the war.
Online bookings account for 90 percent of sales of Istanbul hotels, but high commissions charged by those platforms, which are between 15 percent to 50 percent, is among the biggest problems facing hoteliers, Karacabay also said. “We are working to introduce a cap on commissions just like authorities did in Europe,” he added. 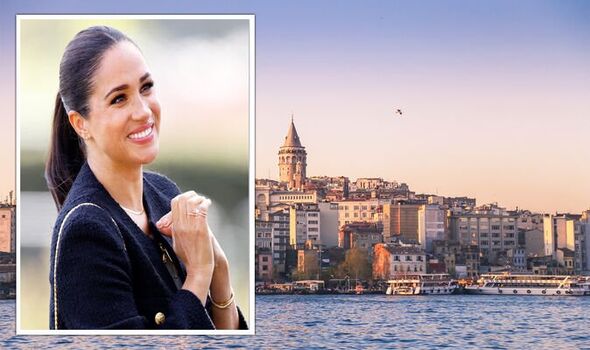 Meghan Markle, Duchess of Sussex, has revealed on her blog ‘the Tip’ is that her favorite holiday location is Istanbul.
There have been some lofty travel goals set in my wanderlust-filled life, but 48 hours in Istanbul was perhaps the most ambitious,” she wrote.

“It’s Istanbul, after all, with its grand bazaar, over 3,000 mosques to explore, rugs to strategically schlep back home, baklava to devour, culture-filled neighborhoods, the requisite hammam you simply must try, and oh yeah – that big ol Bosphorus. Case in point: there’s a lot to squeeze in.”

Equal parts invigorating and dizzying, 48 hours in Istanbul is, indeed, an undertaking, she said.

“Rest assured, your head will be spinning with (Turkish) delight once back on the plane, but undoubtedly, it’s worth every singular moment.”

During her visit, she also explored the famous Grand Bazaar.

“You can’t come to Istanbul and not see Hagia Sophia, which will certainly be on your top five list. So rich in history, this architectural masterpiece is quite near to the Blue Mosque so you can ensure you make it to both Istanbul standouts,”