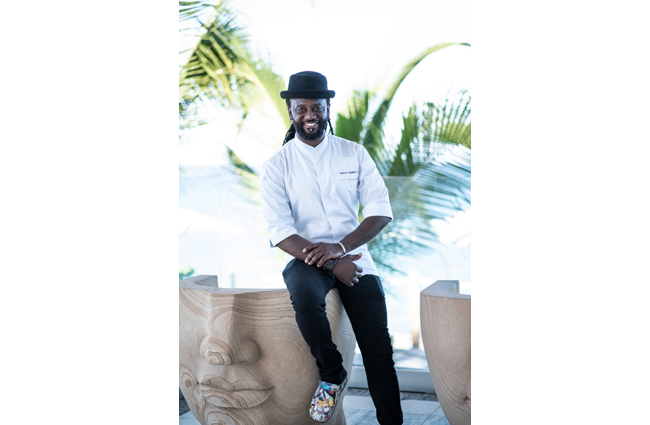 This August, the culinary team at Four Seasons Resort and Residences Anguilla, helmed by esteemed Chef Emmanuel Calderon, will partner again with the critically acclaimed, and locally beloved, Chef Kerth Gumbs for a seven-night residency at their iconic SALT restaurant. Known for his exceptional cuisine, flavours and aromas, Gumbs will offer his culinary expertise from August 1 through 7, 2022, overlapping with the island’s annual Anguilla Carnival.

The London-based chef is sure to produce a meaningful experience for both guests and locals alike. He will curate a sensational three-course menu consisting of his own creative twists on Anguillan classics, including locally sourced ingredients. Accompanied by a sparkling seaside backdrop over Meads and Barnes Bays, Gumbs will carry on the philosophy that inspired the SALT concept based on the strong relationships built with local purveyors.

Starters will be served family style and feature an assortment of dishes from Mahi Mahi Pastrami to Saffron Risotto. Highlights of the menu will include a table starter of Salt Fish – as per the venue’s namesake, this is among his many dishes incorporating the region’s rich array of local salts – accompanied by tender stem broccoli and chilli jam; a flavour-packed main course of Crayfish & Scallop Ravioli; and Gumbs’ signature dessert of Ducana Cake with sweet potato, caramelised white chocolate and coconut.

“I’m delighted to be returning to SALT next month and it’s particularly special to be doing so over our nation’s annual Carnival festivities,” comments Chef Kerth Gumbs. “I will once again be creating a menu for guests that brings back my signature blend of creative twists to Anguillan classics.”

“We’re very excited to be welcoming back Chef Gumbs at SALT,” adds Diego Angarita, General Manager of Four Seasons Anguilla. “The impact that Kerth made on the guests’ dining experience last November was impressive and it was amazing and truly humbling to see how many local community members came to the restaurant to experience his talent.”

Additionally, Chef Gumbs will participate in the Anguilla Carnival on August 5, serving loaded chilli cheese dogs and grilled sausage with avocado and chilli bolognese. This event is called the Grand Parade of Troupes, and will feature local village troupes as they embrace the island’s nickname, “Rainbow City,” with music, dancing, and vibrant costumes.

Chef Gumbs’ experience spans over 17 years working with some of the world’s finest chefs and restaurateurs including Joël Robuchon, Sir Terence Conran, Tom Aikens, Chris Corbin and Jeremy King. In his role as head chef of the critically-acclaimed Ormer Mayfair, Gumbs was praised for his consistently outstanding seasonal menus since the restaurant’s launch in 2016.  Prior to Ormer, Kerth held senior roles at both The Arts Club in London as well as at Jason Atherton’s Singapore venue Esquina in 2011. Gumbs was further a winner of the dessert course in the prestigious BBC Great British Menu 2020, which celebrated 150 years of children’s literacy.

Following Kerth’s residency and upon entry to Anguilla as of August 8, 2022 there will be no more testing required for vaccinated travellers, and unvaccinated individuals will be allowed entry with a negative test.

Chef Gumbs’ SALT menus are priced per guest at three courses for USD 85 plus tax and fees.