The Dixon is the latest London hotel to join the prestigious Autograph Collection from Marriott International. As with all the properties in the soft brand, the location has been able to maintain its own sense of character while simultaneously benefitting from the high standards one would expect from the global organisation.

Opening in late 2018, the hotel has quickly become a mainstay of the Tower Bridge area. While perhaps not one of the more glamorous parts of the British capital, there are plenty of exiting bars, restaurants and quirky attractions for those who know where to look. Given its wealth of charms, the SE1 postcode is a great place to stay for both business and leisure travellers alike. 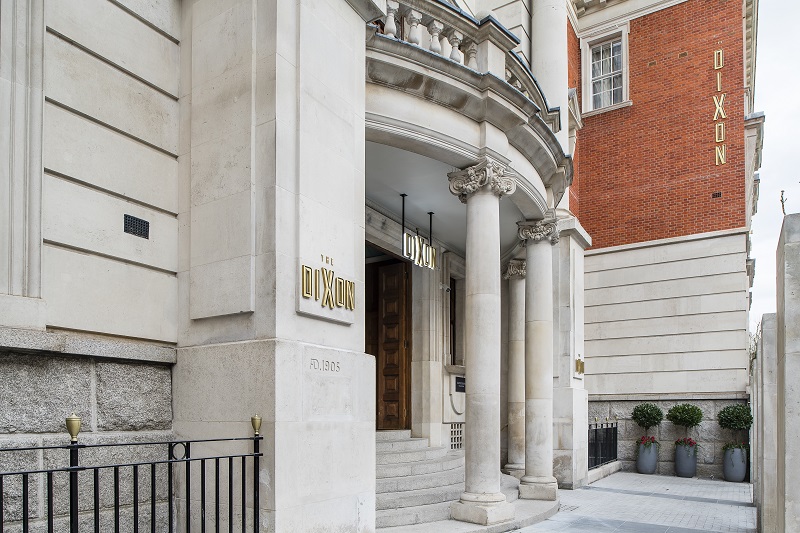 The Dixon, which brands itself as boutique but is in fact quite large, comprises 193 rooms and sits in an imposing former magistrates’ court on Tooley St. Originally built in the early twentieth century, it was thoroughly renovated ahead of opening after sitting idle for a number of years. The whole building has been fully rebuilt into a hotel, conserving key details and highlighting its Edwardian heritage.

Named in honour of the original architect of the building, John Dixon Butler, his ‘portrait’ hangs centre stage atop the imposing, sweeping staircase. Unable to find any photo or painting of Butler for the piece, designers at the Dixon have adapted by covering his face with flowers - just one of the many idiosyncratic tributes to the past which can be found throughout the hotel. 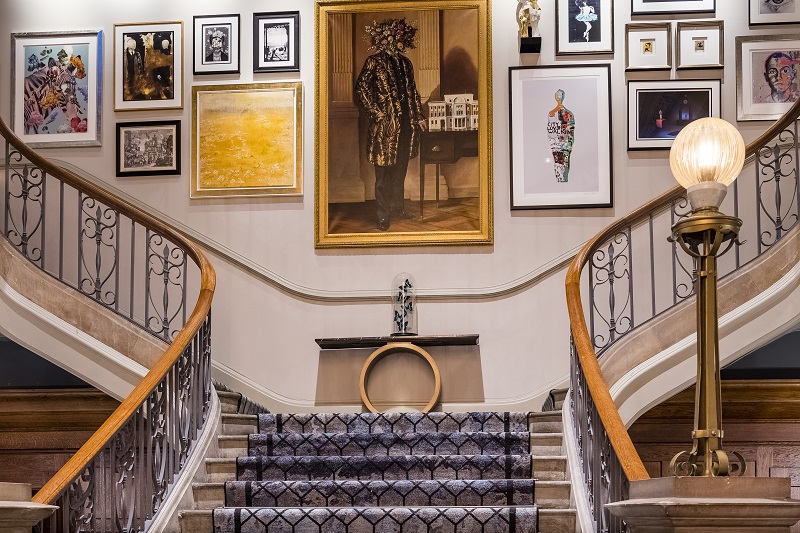 On arrival, the impressive foyer stays true to the Grade II listed building’s original purpose. Guests are welcomed by the staircase, which rambles off invitingly, while the dark wood panelling and Metropolitan Police insignia flooring have also been retained. However, it is now a pleasure to enter here, the opposite of what visitors must have felt when arriving for trial. Silver and teal velvet cascades down from the walls, while a grand chandelier replete with blown glass handcuffs (another discreet nod to the buildings original use) ensure this former prison is now somewhere you would very much want to stay the night.

The architectural restoration, led by Consarc Design Group, has transformed the hotel in uncompromising style. Rani Ahluwalia, creative director at M Studio London, and twenty2degrees have worked closely to bring a stunning interior concept to life that cleverly walks the line between old and new – and their work has been well rewarded. 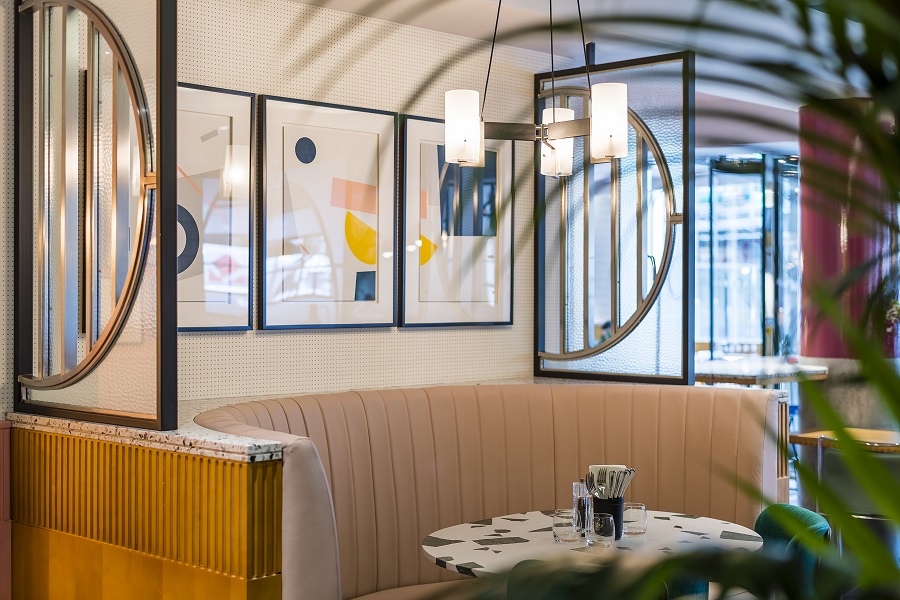 Upstairs, the 193 rooms, including ten spacious suites, again seamlessly incorporate the locale’s culture through an artful mix of heritage design. All rooms feature artworks that bring together avant-garde imagery and legendary local figures, alongside complimentary toiletries from local brand Murdock London. Many have original Edwardian features such as high ceilings, original decorative covings and fireplaces. 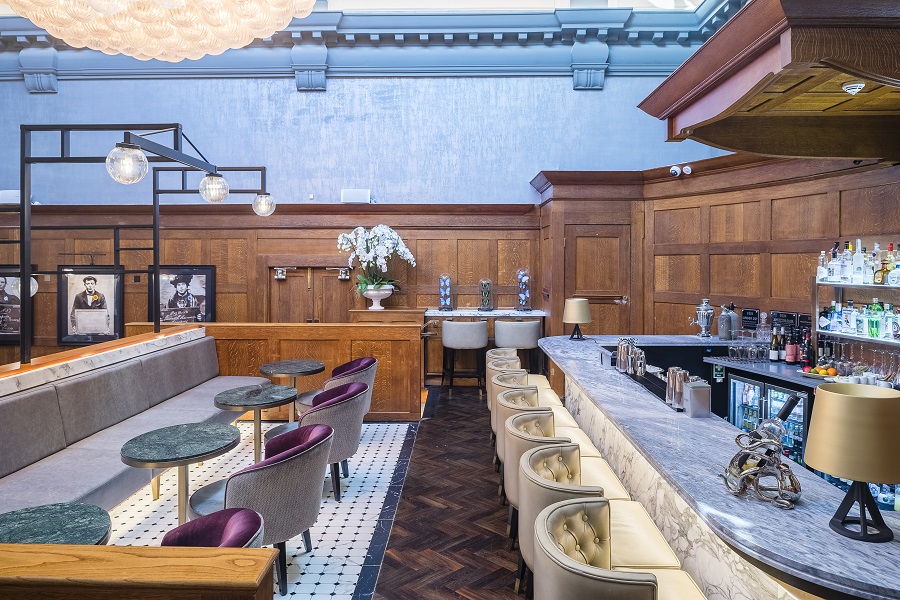 The image of the property has been built around the fine dining options – which is why guests will find cocktails served in courtrooms and coffee brewed just feet away from the jail cells.

During our visit we were treated to dinner in the seductively lit Bauhaus-inspired diner, Provisioners Café, with those original cells kept right at the centre of the restaurant. Here, dishes influenced by the very best that Europe has to offer are presented in a space that speaks of the beauty of utility and style.

My pork loin arrived at the table with a distinctively no-frills appearance, in keeping with the restaurant’s desire for simplicity. But on closer inspection the art was to be found in the finer details. The pork was succulent and flavourful, while the seasonal greens were lifted out of the ordinary by an infusion of chili. The dish satisfyingly delivered on bold flavour, contrasting with its modest appearance. 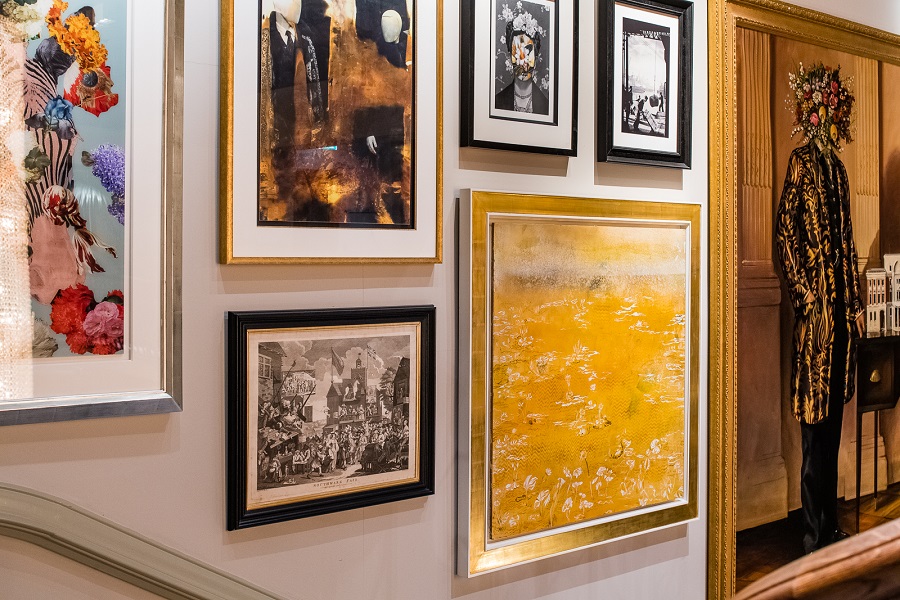 Also on offer is the Courtroom Bar. This old courtroom was where petty criminals received their punishment and guests can take a look at the mugshots on the walls for proof. The original wood panelling remains, and the judge’s bench has been transformed into a bar. Today, the location keeps a wide-ranging collection of world whiskies, an extensive wine list and can provide a range of expertly executed cocktails. The gin Martinis are a particularly fine indulgence – I heartily suggest you try one…it’d be a crime not to!

The cultural significance of the Tower Bridge area is found throughout the art and décor. Inspirational local figures such as Orwell and Chaplain feature in post-modern portraits that echo the fusion of the Edwardian and modern-day architecture of the hotel. Tower Bridge itself is seen from my sixth-floor bedroom window. The hotel is well placed if theatre and art are on the itinerary, with the Globe and (newly opened) Bridge theatres both a short walk away. 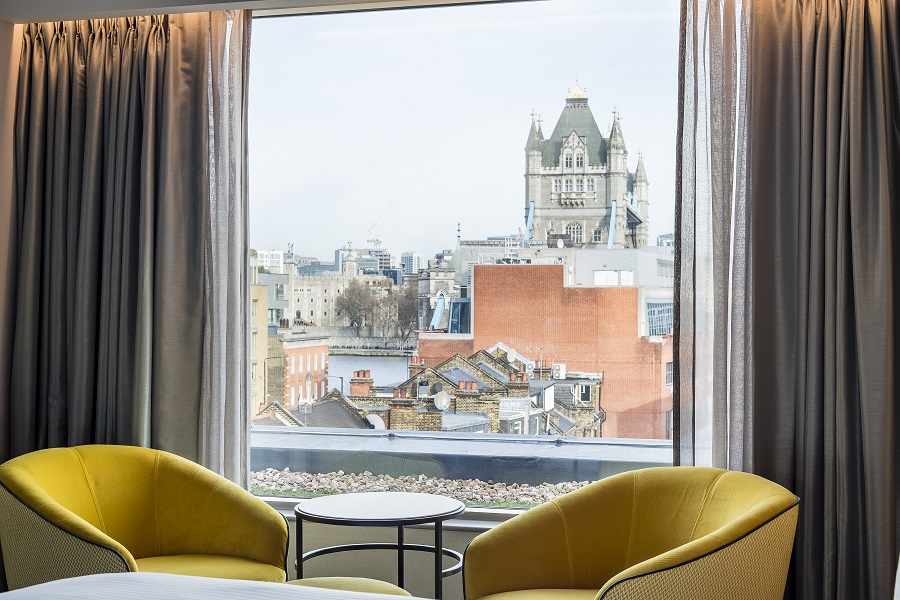 There is a fine line between a themed hotel and one that pays homage to its routes and surroundings. The Dixon manages to stay on the right side of the line, with subtle, humorous and well-executed tributes to the building’s past seamlessly merged with artistic flare - making this the perfect base for an exploration of this fast developing area.

Occupying an awe-inspiring building that dates from 1905, when it served as the Tower Bridge Magistrates Court, the Dixon is a new hotel that captures all the culture, creativity and variety of SE1.