The Future Investment Initiative has closed in Riyadh following a successful third hosting of the annual forum.

Over the three days, global leaders and policy makers came together in keynotes, open conversations and plenary summits to explore how, as we race toward a hyper-connected future, societies and economies can evolve to become more equitable and human-centred.

The event concluded with full house watching a special session looking ahead to the future of economic diplomacy and the G20.

As Saudi Arabia prepares to host the next G20, Ibrahim Abdulaziz Al-Assaf, minister of state, Saudi Arabia, joined a series of former G20 leaders to discuss the G20 and its ability to adapt to the forces of change driving widespread transformations to the global economy.

Advising the kingdom on how to set a successful agenda for 2020, Cameron said: “My advice looking at the opportunities Saudi Arabia has at chairing the G20 is to think hard about the issues you want to promote that will make a real difference.” On Tuesday, the conference was opened by Yasir Al-Rumayyan, governor of the Public Investment Fund who welcomed delegates.

He said: “Like all great things, FII began with a simple idea, to bring diverse leaders together to change the status quo.

“In 2017 it was mainly the United States, Europe and the Middle East, now you come from China, India, the Americas, Japan, Russia and Africa.

“All united in a spirit of collaboration.”

He added: “Until now FII has been an annual conference – it is now becoming an institute as well.

“It will be a place of continuous collaboration.

“A thought leadership platform and a global knowledge hub.”

Among the issues discussed were how sovereign wealth funds are reshaping global investment, the challenges and opportunities of moving towards a more inclusive workforce and how investors can thrive in a multipolar world.

Discussing the challenges faced by investors, Stephen Schwarzman, chief executive of the Blackstone Group, said: “We’re all dealing with more uncertainty than we were.

“Ten years ago, you could make an investment and be reasonably sure that the basic model was going to remain intact.

“Now, whenever you make an investment you look at to see whether that company’s business model is resilient knowing it’s going to be challenged.

“You’re either going to be a disruptor or you’re going to be disrupted - or maybe both at the same time.”

The speakers at FII 2019 include nearly 300 leading global decision makers, investors and experts from more than 30 countries.

The speakers demonstrate FII’s global perspective, with significant numbers coming from North America (39 per cent), Europe (20 per cent), Asia (19 per cent) and the Middle East (15 per cent).

More than 6,000 attendees have also registered their participation at the event.

Mukesh Ambani, chairman, Reliance Industries, said: “The world is transiting, this is the first time that you have simultaneously four or five new technologies combined with digital that are really transforming the global economy.

FII was created to drive conversation and collaboration around some of the most pressing topics currently facing the world today – including sustainability, technology and the future of society. 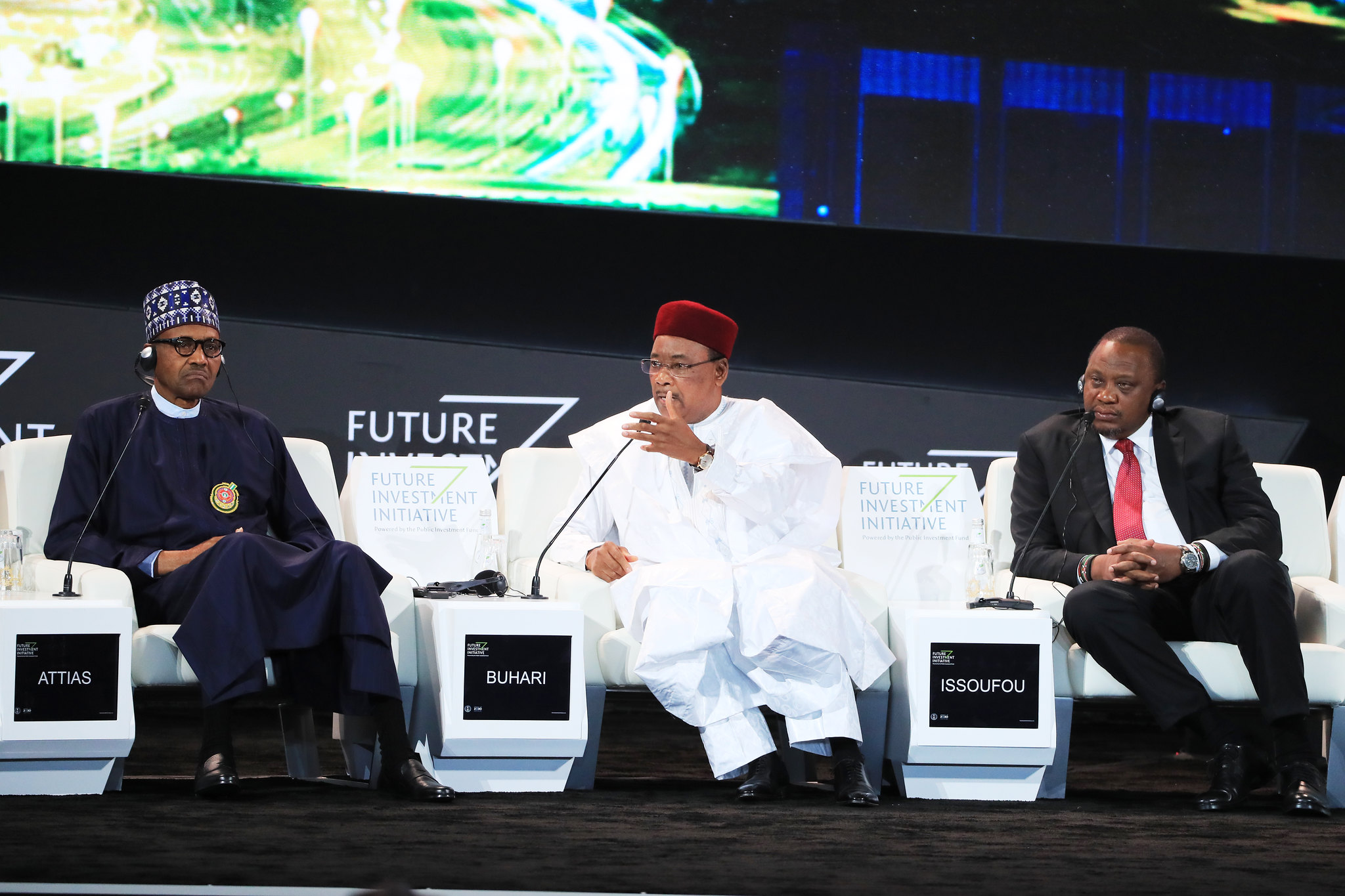 In a panel focusing on the future of Africa, Muhammadu Buhari, president of Nigeria, Mahamadou Issoufou, president of Niger, and Uhuru Kenyatta, president of Kenya, discussed a roadmap to promote universal connectivity and intracontinental trade, with a goal to drive inclusive growth and public-sector reform.

Kenyatta stated, “Africa wants to be a friend to all and is open to business” and was met with a round of applause by the audience.

Inspiring new generations was the focal point of conversation in the afternoon panels examining the move toward deep tech, the future of space exploration and the world of entertainment.

Astronaut Terry Virts told the audience about the reaction he sees internationally, saying: “I speak around the world, and there’s excitement everywhere I go.”

Prince Abdulaziz bin Turki bin Faisal Al Saud, chairman, Saudi General Sports Authority, also pointed to the demand that the country’s young population was creating in the sports industry, highlighting that “with 70 per cent of the Saudi population under the age of 35, there is a demand for sporting events and they’re a platform for growth – we aim to create 130,000 jobs by 2030.” Among the topics discussed were the opportunities and challenges of a circular carbon economy and the new technologies transforming the oil industry in response to complex economic, social, political, and environmental pressures around the world.

In a special address to the audience followed by a conversation with Lubna Olayan, chair of the executive committee, Olayan Financing Company, Brazil’s president Jair Bolsonaro discussed his country’s political transformation and the specific measures underway to address Brazil’s social and economic challenges.

Emphasising the Brazilian government’s task to unleash powerful market forces to drive economic growth, he told global investors that “Brazil is back in business”, stating that “this world of opportunities remains available to all of you”. “I think the changes that you made, the technology upgrade that you have done, these are all the right things.”

Speaking about the importance of innovation, Rick Perry, US secretary of energy noted that “fifteen years ago, they told us that we had found all the fossil fuels there were to find – we’d reached peak oil.

“But what I remind people about is the ingenuity of the people on this globe.”

There were also discussions of how new collaborative models of investment are driving tech innovation at scale, with Dennis Johnson, chief strategy officer of the Public Investment Fund stating that “as PIF moves forward with its investment strategy we will be focusing on AI, technology supporting smart cities, improvements in healthcare delivery, and cybersecurity”. Summits on the final day of FII 2019 focused on inclusive finance, the long-term value of investing in female-led businesses and the new frameworks that can support social cohesion during a time of fast-paced social transformation.

The conference’s agenda reflected how, both collectively and individually, the community of FII delegates, speakers and partners are able to affect enormous change for good in the world.

Demonstrating the kingdom’s commitment to being at the forefront of new frontier technologies, the conference featured cutting-edge robots, virtual reality displays and facial recognition software.

The conference also featured a pavilion for the FII Institute, powered by the Public Investment Initiative, to complement the annual FII conference through a number of initiatives.

The FII Institute will serve as an important knowledge platform for the global investor community, enabling the sharing of ideas and expertise, and the development of innovative solutions that drive the future of investment and economic value creation.

Coordinated under Invest Saudi, these agreements reflect the enormous potential that Saudi Arabia offers to investors from across the kingdom and around the world.

The Future Investment Initiative is an international platform for expert-led debate between global leaders, investors and innovators with the power to shape the future of global investment.

The event took place in Riyadh, with the Ritz-Carlton, Riyadh - recognised with a number of titles at the World Travel Awards - once again playing host.

It is focused on utilising investment to drive growth opportunities, enable innovation and disruptive technologies, and address global challenges.

The third edition of FII will continue building active, global networks of influential decision makers to explore the emerging industries that will shape the global economy and investment landscape over the coming decades.

The Public Investment Fund is one of the largest and most impactful sovereign wealth funds in the world, enabling the creation of new sectors and opportunities that will shape the future global economy, while driving the economic transformation of Saudi Arabia.

PIF is building a world-class, diversified portfolio through investments in attractive, long-term opportunities across sectors and asset classes at both the domestic and international level.

For more information about the FII 2019 program and speakers, visit the FII website.