The event is the most influential showcase on the calendar, and this year industry leaders gather with key government representatives to continue aligning efforts to support the recovery and move beyond to a safer, more resilient, inclusive and sustainable future.

As Saudi Arabia itself continues to develop its offering, Breaking Travel News is publishing a series of features on the destination in honour of the event.

Today we explore NEOM – a vision of the future taking shape in the Saudi desert.

The development is an attempt to do something that’s never been done before and it’s coming at a time when the world needs fresh thinking and new solutions.

Simply put, NEOM will be a destination, a home for people who dream big and want to be part of building a new model for sustainable living, working and prospering.

Coming from the future, before it was even launched, this is how NEOM came about, and this is how its founder, Saudi crown prince Mohammed bin Salman, envisioned it, an agent of progress and change.

NEOM will introduce a new model for urban sustainability powered by 100 per cent renewable energy.

It will adopt environmental responsibility principles, that promote sustainable and regenerative development practices.

NEOM will be a hub for innovation, where established global businesses and emerging players can research, incubate and commercialize ground-breaking technologies to accelerate human progress.

Commerce and industry will be integrated into communities to build supply chains that facilitate innovative and efficient operations.

NEOM reimagines urban living by establishing walkability as its cornerstone.

Communities will be built on a physical and digital infrastructure layer containing essential utilities and transportation services integrated below the surface.

NEOM will be built around people, not cars, and designed for convenience and walkability.

Adopting a pedestrian-first approach, all amenities will be within a five-minute walk. 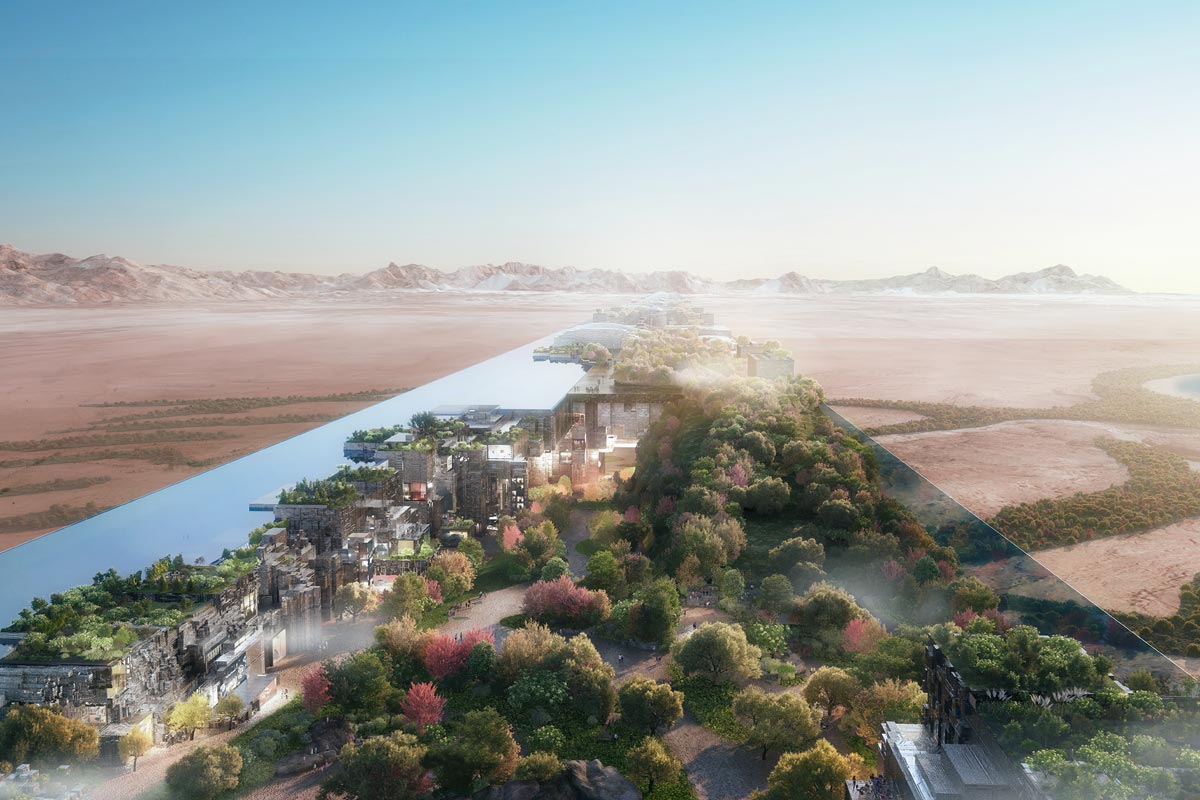 In January last year, his royal highness launched the initial idea and vision of the city that redefines the concept of urban development and what cities of the future should look like.

The designs embody how urban communities will be in the future in an environment free from roads, cars and emissions.

It will run on 100 per cent renewable energy and prioritise people’s health and well-being over transportation and infrastructure as in traditional cities.

It puts nature ahead of development and will contribute to preserving 95 per cent of NEOM’s land.

The announcement reveals the most important characteristics of The Line, which is only 200 meters wide, 170 kilometres long and 500 meters above sea level.

It will eventually accommodate nine million residents and will be built on a footprint of 34 square kilometres, which is unheard of when compared to other cities of similar capacity.

This in turn will reduce the infrastructure footprint and create never-before-seen efficiencies in city functions.

The ideal climate all year round will ensure that residents can enjoy surrounding nature when traveling on foot.

Residents will also have access to all facilities in The Line within a five-minute walk, in addition to a high-speed rail with an end-to-end transit of 20 minutes.

bin Salman said: “We cannot ignore the livability and environmental crises facing our world’s cities, and NEOM is at the forefront of delivering new and imaginative solutions to address these issues.

“NEOM is leading a team of the brightest minds in architecture, engineering and construction to make the idea of building upwards a reality.”

He continued: “NEOM will be a place for all people from across the globe to make their mark on the world in creative and innovative ways.

“NEOM remains one of the most important projects of Saudi Vision 2030, and our commitment to delivering THE LINE on behalf of the nation remains resolute.”

The Line offers a new approach to urban design: The idea of layering city functions vertically while giving people the possibility of moving seamlessly in three dimensions (up, down or across) to access them is a concept referred to as Zero Gravity Urbanism.

Different from just tall buildings, this concept layers public parks and pedestrian areas, schools, homes and places for work, so that one can move effortlessly to reach all daily needs within five minutes. 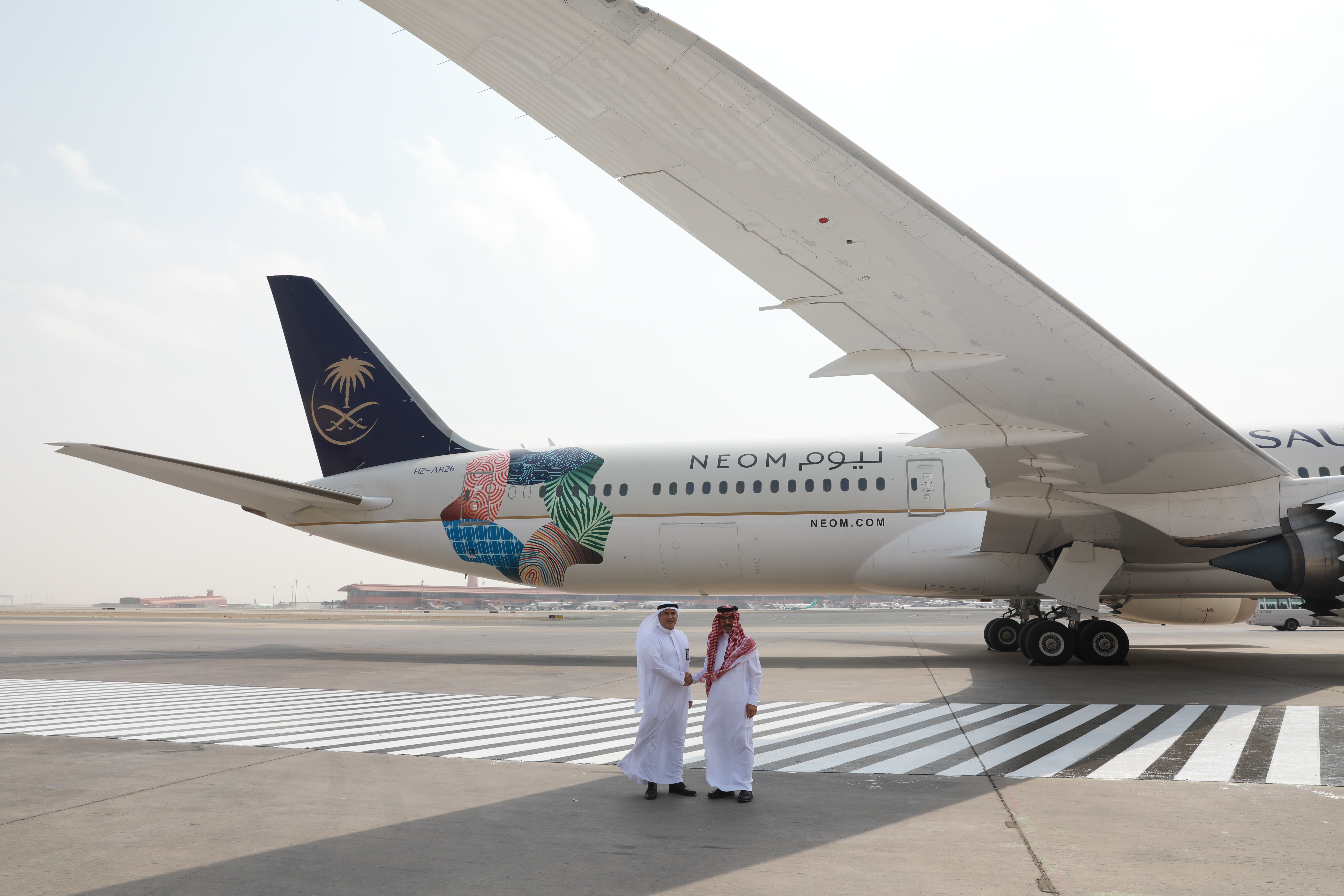 Saudia, the national carrier of Saudi Arabia, has been doing its part to promote the destination, emblazing the brand of NEOM on its aircraft.

Part of a strategic partnership between the two entities, the initiative honours NEOM as a new model for sustainable living, working and prospering, and a hub that fosters innovation and attracts the world’s most brilliant minds to create the future.

The joint venture forms just one of many projects that Saudia and NEOM are planning to collaborate on.

Commenting on the partnership, Saudia director general, Ibrahim Abdulrahman Al Omar said: “This partnership paves the way for more cooperation in the future.

“Placing the NEOM and Saudia brands side by side delivers a meaningful message to the world, highlighting the unity and coordination between the sectors and the various vital economic projects which work closely on achieving the Kingdom’s strategies and ambitious plans.”

NEOM is in service of humanity to ensure prosperity and offer real solutions to global challenges.

Find out more about the future of Neom on the official website.