St. Lucia has unveiled a massive infrastructure upgrading and a new branding campaign at Caribbean Marketplace 2009.

The new projects, revealed by Senator Allen Chastanet, St.Lucia Minister for Tourism & Civil Aviation (pictured left), include a new cruise pier in Vieux Fort, the redevelopment of Rodney Bay, a new marina and yacht club in Castries Harbour, smaller marina developments in West Harbour, plus a new fishing complex.St. Lucia, currently playing host to the Caribbean Marketplace for the time, has experienced a huge real estate boom over the past few decades, and the new developments aim to keep the paradise island at the forefront of quality and authentic tourism.

Speaking to Breaking Travel News, Senator Allen Chastanet, St.Lucia Minister for Tourism & Civil Aviation, said: “It’s not just about looking a year or two ahead but as far as 50 years into the future.”

“There’s been a huge spike in business, with industrialists tapping into St. Lucia as a quality destination. Real estate here is limited and values have held up well compared to what’s happening globally. It’s important we keep the island’s infrastructure right at the helm,” he added.

With markets across the world tightening their purse strings, Senator Chastanet believes you have to look at the long term. He said: “The best way to work through the financial crisis is to remain consistently profitable - that means everything from examining operating costs to deliver a quality product. However it doesn’t mean discounting as this is not a long-term process.” 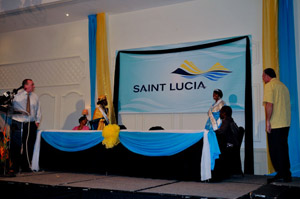 Integral to the grand plan is St. Lucia’s village tourism initiative and the concept of creating a destination within a destination. This will include the redevelopment of 12 villages.

“Developing tourism on a local level has numerous benefits,” explained Senator Chastanet. “It creates local businesses from hotels to artisan workshops, which in turn creates local jobs. This acts as a catalyst for local regeneration and helps preserve local traditions and culture.”

“With thriving villages, tourists too feel safer and get a real flavour of our fusion of Afro-Caribbean, French and English.” 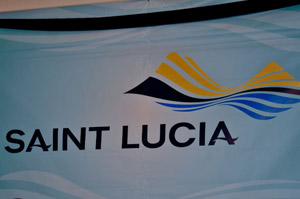 The developments are also being accompanied by new branding for the island. The new identity is inspired by othe world famous Piton mountains, the colours of the national flag and the warmth and pride of the citizens.

Senator Chastanet added: “The brand mark encompasses the stunning natural beauty of our island as well as the diversity of our people and our culture. It will act as the focal point of our strategy to take St Lucia to the next level.”
——-