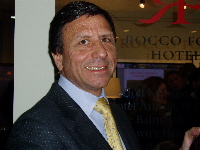 The first thing that I noticed about Sir Rocco Forte was the extraordinary range of colours constituting his dark Italian eyes.I have seized an unexpected, but welcome opportunity to meet with Sir Rocco Forte at ITB Berlin, when a rare slot has appeared in his schedule. After announcing myself, Rocco promptly appears and following a brief, informal introduction, he takes a seat besides me. I am impressed that Rocco Forte is dutifully attending the Rocco Forte stand.

He is impeccably dressed with a chic, grey/blue Italian-looking designer suit, encasing his athletic physique. His delicate, yet conspicuous yellow tie has caught my eye - it is almost a personification of the man himself - discreet, but self-assured.

He waits intently for my first question and then pauses, casting a thoughtful gaze behind me. This becomes a little disconcerting after a while, but as we continue, I realise that Rocco Forte does not speak before he has thought carefully about what he is going to say.

We are surrounded by professionals from the hospitality industry; many of whom walk past us and give Sir Rocco a knowing nod. Some stop to pay their respects. I ask Sir Rocco has he ever thought of branching out rather than staying in hospitality: “I was brought up in the hotel industry and was associated with it from a very young age and it was something that I naturally liked. The business is exciting in itself - it’s a very broad canvas with all sorts of aspects which attract me - from the creative side to the development of people to success.”

Rocco Forte is an academic by letters. He graduated in modern languages from Oxford and went on to qualify as a Chartered Accountant. Yet Rocco openly admits - in his dignified English accent - that this interfered with his dreams: “I did just about enough to get in to Oxford but I always wanted to go into my fathers business. Everything else was a nuisance. Being at university was a nuisance - then I did accountancy after that and that was a bit of nuisance”.

Famously, the Forte family hotel empire, founded by Rocco’s father, Lord (Charles) Forte in 1934, was taken over by non-travel company, Granada in 1996. The bid was led by Gerry Robinson, just four years after Sir Rocco Forte - the only son of Charles - had inherited his fathers 800 hotels and 1,000 restaurants. Although Rocco was unable to maintain the company’s independence, he achieved a very good price for the company: Money which he has ploughed straight back into building his new hotel operation.

Although this must be a difficult subject for Rocco, I had to ask - did you ever want to give up? “All you think about is how you are going to win - you don’t think about anything else.”

Rocco set about developing his new luxury hotel group in 1996. His main objective from the beginning was to create the premiere luxury hotels group in Europe. “On reflection”, he tells me: “Setting up from scratch again was quite a challenge - at the time when I embarked upon it I didn’t quite expect it to be as difficult as I now know it was”, quoting his main strength as a certain determination to get things to happen and an ability to motivate people.

Rocco has the family name back now, and RF has become Rocco Forte Hotels, which he tells me had an immediate impact: “We were able to use the name upfront and the recognition was clearer, especially within the travel trade. It is very difficult to quantify the impact but I think it’s certainly been very positive for us”.

The Rocco Forte Hotels portfolio now consists of 14 luxury properties, each with its own individual personality, reflecting its location and nationality. Another trademark of the collection is the close attention to detail and design in each hotel. With operations in Rome, Florence, Edinburgh, Cardiff, St Petersburg, Manchester, Brussels, Beaujolais and Geneva, and openings due in Frankfurt, Berlin, Sicily, Munich and London, Rocco Forte Hotels is gathering speed.

Rocco also has his sights set on Paris, Madrid, Barcelona, Milan, Moscow and Amsterdam. He tells me: “When I am in those cities I will have a very strong position”.

According to Rocco, the most important aspects to consider when running a luxury hotel include location, and general ambience, but he tells me highest on the list of priorities must be service: “Most important of all is a high level of service delivery to the customer which a lot of people say that they do, but very few people actually succeed in doing it well”.

Rocco sees space as essential in a luxury hotel guestroom and comments: “A room has got to be comfortable and have a functionality”. Illustrating his eye for detail, he adds: “The bed must be comfortable, the linen has to be crisp and the bathroom has to be of a reasonable size. The feeling of luxury is provided by space so that’s important. A modern light you can read by is also important.” He adds: “There is nothing mind boggling - it’s all very simple, little details which actually make the overall effect”.

“I visit the properties regularly and so I am involved. I see what is going on - if there are things I don’t like, I do something about them. So I am very much in touch with the properties but I can’t run them on an individual basis. If I run them nothing will happen”.

So what drives Rocco Forte? “I have an ambition to create something worthwhile in my chosen field. I set about creating a new hotel group seven years ago and I want to succeed in doing that. That’s really my main driving force”.

Rocco is a keen sportsman. When I mention sport his eyes light up and his response quickens: “I have always played golf and I like shooting, but for the last five years I have been doing triathlons. I have participated in three world championships for my age group and I commit myself to doing iron man this year”. Training takes up an hour and a half, six days each week - he begins to describe his routine and I am exhausted by 9am!

Rocco has just turned 60. He was knighted in December 2004 for his services to the UK Tourism Industry and last month received the highest Italian accolade, the Gran Croce dell’Ordine al Merito della Republicca Italiana, for his entrepreneurial merits and strong links with Italy. Rocco tells me: “To receive an award from any country is always an honour and this is a top Italian award which is particularly nice when I am of Italian origin and therefore still have strong ties and strong links with Italy”.

I question whether Rocco’s many achievements have influenced his expectations for his 3 children: “I think there is a balance with my children that - you have actually got to try to encourage them to develop their own ideas but if they are talented you have to make sure that they are fully utilising their talents and try to guide them or occasionally push them if they need pushing so that they fully realise their own potentials. Some parents are so ambitious for their children that they overwhelm them. A lot of children are mainly driven by what their parents want rather than what they want themselves - I think that’s wrong”.

I ask does he get to spend time with his family? “Take the last few days. I was in St Petersburg Sunday. Came back Wednesday. Manchester on Thursday. Back Friday. Flew to Venice Saturday. Came here (Berlin) Sunday. I’m going to Frankfurt tonight and back to London tomorrow. So that’s 8 flights in 10 days”. 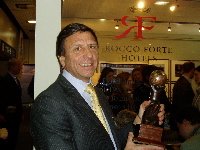 I wonder whether Sir Rocco Forte is satisfied or feels that he has achieved enough, He swiftly answers my question: “The minute you are satisfied is the minute to leave this world”.
——-