National tourist boards often have a few tricks up their sleeves when it comes to boosting the domestic hospitality sector.

Many will seek to extend the peak season, attracting guests during the parts of the year previously considered quieter; think ski resorts building hiking trails in the summer.

Another trusted method is to diversify the offering - no self-respecting Caribbean island will be satisfied with merely being a beach resort, with many now emphasising golf facilities or a conference centre in order to highlight just how much more is on offer.

Elsewhere, there are attempts to shift the spotlight onto less well-known areas.

In the UK the tourism sector is focused on London, so VisitBritian is pushes the highlights of Manchester and the north of England, for example.

This is particularly true of Italy – one of the most competitive markets of all.

While guests may have seen the delights of Rome, Florence and Venice, there is also a great deal that remains undiscovered about the country.

This, in a roundabout way, brings us to Perugia - affectionately dubbed the ‘green heart of Italy’.

Named after the Umbri tribe, who dominated the landlocked region before the arrival of Etruscan and Roman settlers, the area offers a tranquil experience away from the hubbub of the major tourism centres.

Today Umbria is known for its medieval hill towns, serene lakes and the sprawling vistas over the Apennine mountains.

Untouched by overtourism, the region is a showcase for the perfectly preserved charm of the European Middle Ages. 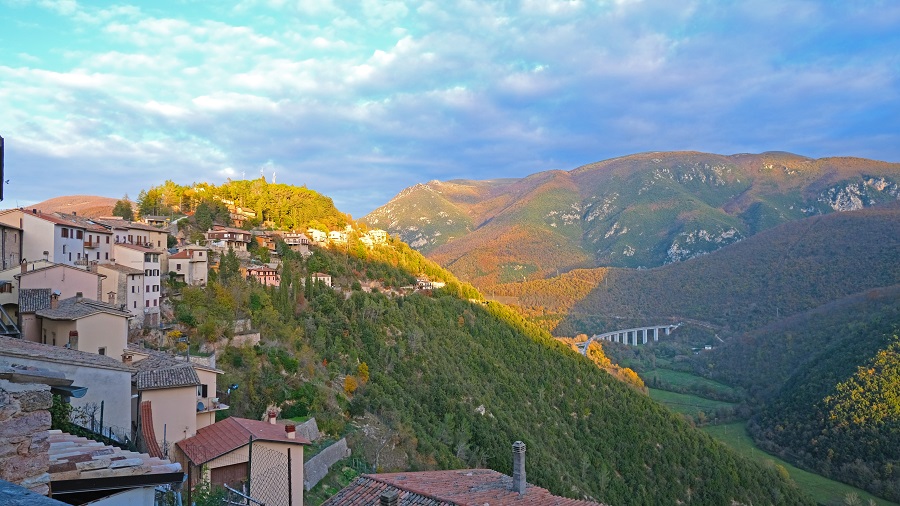 While Perugia and Assisi, deservedly, see the majority of international visitors, there is plenty to explore outside of the larger cities – not least for Italian domestic travellers who may be unfamiliar with the region.

A short drive north from Perugia, for example, lies Gubbio.

Formerly the capital of the Umbrian population, the town stretches to over 500 metres above sea level and pre-dates the Roman empire.

Gubbio was part of the original St. Francis’ Way, which stretched to Assisi and was later expanded through to Tuscany and Rome.

Even today it remains a popular pilgrimage destination.

The narrow, cobbled alleyways are flanked by Medieval pink limestone properties, the majority of which has survived in their original form, while a number have been rebuilt with an eye for historical accuracy. 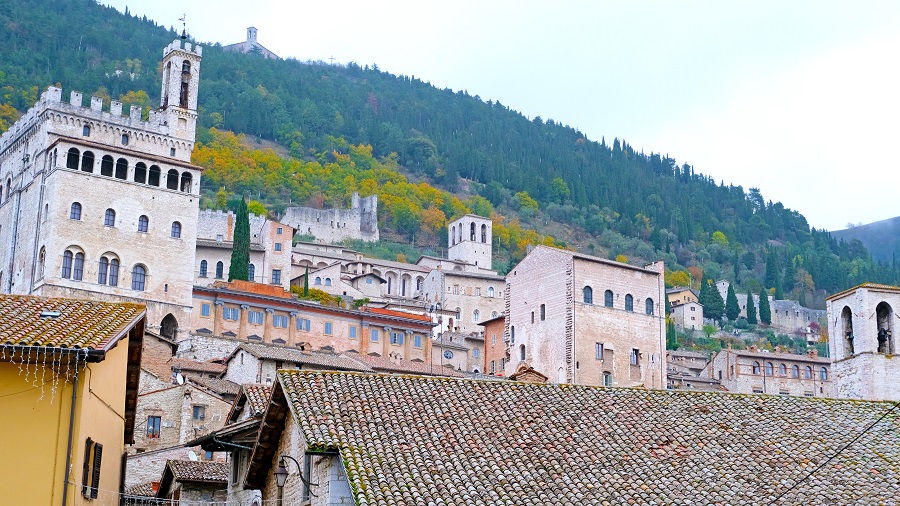 Built in the mid-1300s, the two buildings are connected by Piazza Grande to allow for easier communication between the Doge and the Consuls.

The L-shaped form of Palazzo del Podesta is highly unusual and is an example of Gubbio’s awe-inspiring architectural engineering.

Nowadays, a part of Palazzo dei Consoli has been turned into a civic museum, which famously holds the Iguvine Tablets, written in (and thus proving the existence of) an ancient Umbrian language.

Just outside of Gubbio, deep in the Apennine mountains, is the Monte Cucco National park, perfect for the more adventure-minded traveller.

The park offers more than 130 kilometres of paths winding through unspoilt woods and picturesque valleys.

Visitors can partake in a variety of activities such as hang gliding, paragliding, canoeing and even cross-country skiing.

There is also an opportunity to venture inside Monte Cucco and visit one of the largest grottos in the world.

The Grotto of Monte Cucco comprises of 30 kilometres of tunnels and reaches nearly 900 metres in depth.

Visitors can enjoy a unique sensory experience as they journey to the centre of the world.

For oenophiles, there is Cantina Semonte, situated on the outskirts of Gubbio, which for two decades has specialised in Dolcetto, Chardonnay and Sangiovese wines.

Adjacent to the site there is the Degusteria, where visitors can enjoy traditional Umbrian cuisine and taste the local variety of black truffle.

Their charcuterie board deserves an honourable mention.

Recently the Umbrian Tourism Council has partnered with the local borghis (villages) to create a network of stays for travellers to explore.

A borgo, meaning ‘outside of the city walls,’ is a small hilltop village dating back to the Medieval period and ingrained in local history.

It is an emblem of Italian culture with rich artistic, architectural and gastronomical heritage. 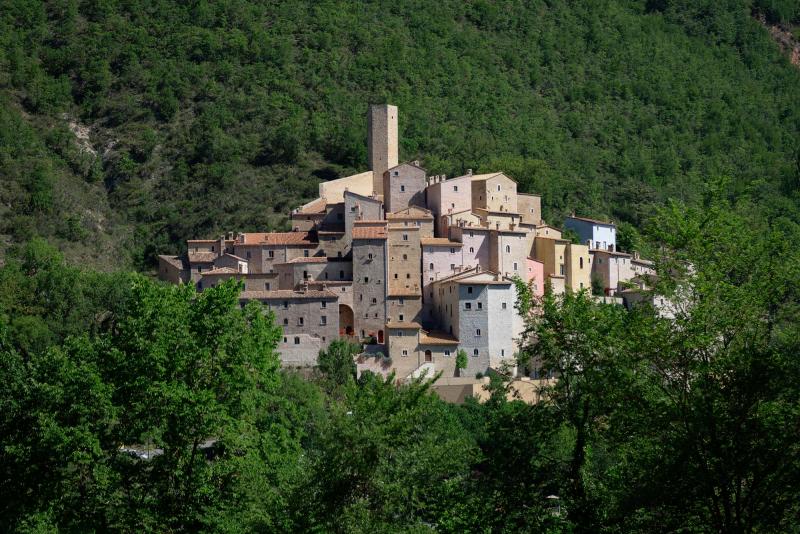 Sellano commune, 50 kilometres south-east of Perugia, is home to 48 of such properties, out of which only a dozen have been recovered - among them Castello Postignano.

Nested high up in the Umbrian Apennines, overlooking the Vigi river, the village provided a critical strategic link between Assisi and Spoleto in the Mediaeval period.

After a landslide in the mid-1960s, the village stood abandoned until the site was purchased by two architects - Gennaro Matacena and Matteo Scaramella - in the 1990s with the aim of restoring the hill town to its former glory.

The architects were careful to keep as much in line with the original blueprint as possible - to do this they reached out to former residents of the village and brought them onboard in an advisory capacity, thus being able to capture the essence of Postignano.

The layout of the rooms was largely kept the same and designers also utilised the rocks fallen during the 1997 earthquake when building the foundations.

Castello Postignano is a prime example of ‘spontaneous architecture’ - a signature of Italian hill towns, where all the dwellings were constructed by the village’s inhabitants who used local materials and home-grown techniques.

This may sound artisanal, but in reality it is incredibly complex, as building a habitat on a steep rock in the middle of nowhere is an admirable feat.

Presently the village complex is made up of a hotel with 22 spacious and well-appointed suites, a heated pool, a spa with beauty treatments and massages, a health trail, a bowling green, a billiard room and a library lounge.

Both guests and visitors can sample quality Umbrian produce at La trattoria Casa Rosa and tickle their palettes by sampling fine regional wines at the terrace bar.

There are also apartments for sale, should visitors wish to make their stay more permanent.

Postignano is the perfect base for further exploring the artistic, historical and scenic treasures of Umbria, from the world-famous to the hidden jewels to be found within a few kilometres of the hill town.

Away from the bright lights of Rome, much of Italy remains to be unearthed by intrepid travellers.

As the market reopens following the Covid-19 pandemic this summer, it might be the perfect time to visit, before the crowds find these undiscovered gems.

Guests looking to find out more about this rapidly developing region of Italy can contract Identità Terra.

Based in Perugia, the company creates unique experiences across the region for guests from around the world.