Travelodge has announced a £223 million programme of investment for 2013 designed to help further grow its business.

The cash investment will help fuel growth, strengthen the company’s brand offering and ensure consumers obtain the best value in the marketplace.

Twelve of these openings will be in the UK and two in Spain.

The two Spanish hotel openings will double Travelodge’s room stock to 700 and boost the number of hotels to six which includes three properties in Madrid, two in Barcelona and one in Valencia.

The first hotel is scheduled to open in spring and is located in the fashionable beach area Poblenoul in Barcelona.

The new Madrid hotel is scheduled to open in the summer and is located in the famous Julian Camarilo commercial district.

“The UK at less than 20 per cent remains a growing market for branded budget accommodation, as it is still well behind matured markets such as the USA and France. In response to this growing opportunity, our growth strategy remains in the forefront of our new business plan.” 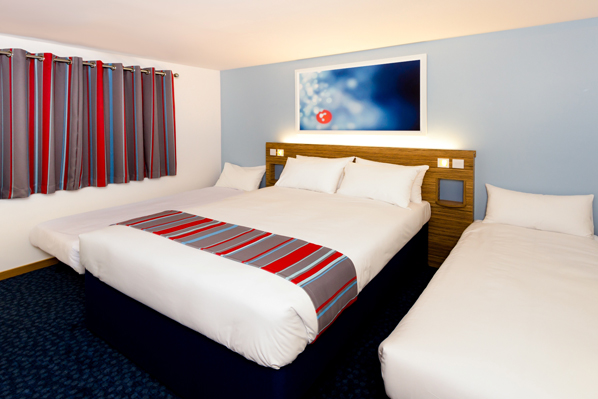 A new room concept is part of the investment plan

During 2013, Travelodge will also create 420 new jobs with 371 of the new positions being generated via the 14 new hotel openings.

As part of today’s announcement, the hotel chain is also unveiling its new room design which has been created by Travelodge customers.

The new room concept has taken 12 months to complete from initial research to implementation and has been overseen by Travelodge’s dedicated in-house Interior Designer - Frances Whitley.

Feedback from Travelodge customers stated they wanted an inviting, functional, warm, relaxing environment, with the main focus of the room being an extremely comfortable bed.

To ensure Travelodge met this brief, they worked in cooperation with their customers so that they were involved in every decision and that the new room design met with their expectation and delivered on quality and service.