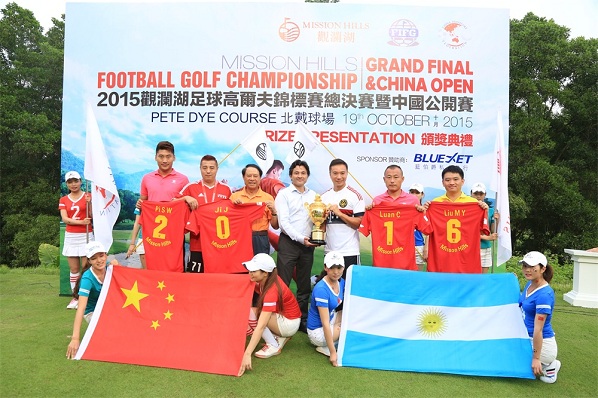 Putting their best foot forward, Zhang Yunlong and Hu Zhiqiang were crowned champions at the championship.

In a dramatic culmination to a three-month programme that comprised four qualifying rounds, Luan Chen, Pi Siwei , Ji Jie and Liu Mengyang held their nerve to clinch a memorable victory.

As China champions they will now be presented with the opportunity to compete in the Footgolf World Cup 2016, to be held in Argentina.

Registered in Hong Kong in March, the China Footgolf Federation was officially established by the Mission Hills Group.

It is committed to promoting and developing the sport of footgolf in China and the region.

Citing the fact that China has 26 million footballers and 200 million football spectators and fans, Chu said: “In a short space of time, it’s become clear that footgolf in China is here to stay.

“We’re pleased that Mission Hills has been at forefront of this exciting new venture and I’m convinced that footgolf has the capacity to grow in popularity and participation at a fast rate.

“We have seen that football and golf can be perfectly combined into an enjoyable pastime for players and fans alike.

“As a new and exciting way, football golf can introduce even more people to golf.”

Chu added that Mission Hills is committed to developing footgolf with the launch of a domestic league, the staging of international events and the creation of a permanent footgolf course open to the public all on the agenda.