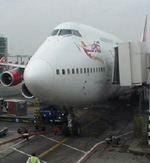 Virgin Atlantic announced today that it will be the joint sponsor for the fight between Amir Khan and the Cuban Mario Kindelan, at the Reebok Stadium in Bolton, on 14 May 2005 to celebrate the start of new services between Gatwick and Havana this summer.

“We are absolutely delighted to be the lead sponsor for Amir Khan’s rematch with the Cuban Mario Kindelan. Let’s hope Amir gains his revenge from his defeat in the Olympic final!

“We are particularly pleased to be a sponsor of this match as Virgin Atlantic will be launching services to Havana in June this year. We hope that Amir will join us on our inaugural flight to Cuba as part of the celebrations.”

Virgin Atlantic’s inaugural flight to Havana will operate on the 27 June 2005. The airline will then operate twice-weekly services between Gatwick and Havana on Thursdays and Sundays.
——-