The 2010 FIFA World Cup will be like no other World Cup in history. For the first time the greatest event in football, the most widely-followed sporting extravaganza on the planet, is breaking new ground in Africa – more specifically, South Africa.

This is an exciting and dramatic era for the land of the Rainbow Nation which has made such enormous strides forward in such a short time since the historic day when Nelson Mandela walked free on February 11, 1990 and began the most challenging process of unification.

South Africa will welcome the world with a song and dance and the unique chorus of the vuvuzelas horns which invest the land’s football with an atmosphere like that at no other sporting festival.

The finals are being staged in 10 venues in nine cities spread out among around some of the furthest points of South Africa’s geographical and social compass.

South Africa is bordered by Namibia, Botswana and Zimbabwe to the north and by Mozambique and Swaziland to the east while Lesotho is an independent country within the country’s land area.

Naturally, national and local authorities in South Africa hope that many of the football visitors will take time out or extend their stays to explore tourist attractions ranging from the southern coastline to the Kruger National Park.

Promoting the country is, after all, one of the reasons such immense effort has been put into bringing the World Cup to Africa for the first time.

Inevitably the footballing focus will be on the Johannesburg-Pretoria axis. Johannesburg is not only South Africa’s largest city and the provincial capital of the wealthiest province Gauteng but the only one with two stadia. The rebuilt, rebaptised Soccer City will host the Opening Game and the Final; Ellis Park hosted the historic Rugby World Cup Final in 1995 and the 2009 Confederations Cup decider. 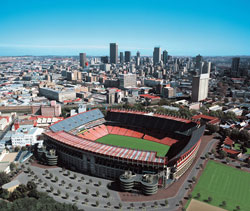 As well as hosting a total of 15 FIFA World Cup matches including the opening and final matches - Johannesburg will be the world’s business and media hub for the 4 weeks of the World Cup.
The opening and closing ceremonies will be in Joburg as well as the headquarters of FIFA and the Local Organising Committee.  It will house the International Broadcast Centre, accommodate 22,000 international media and it will be the transport hub for the event.  It has two FIFA World Cup stadiums, numerous official training venues, and is the base for overflow fans from at least four other venues.
Significant sport business will take place as international sporting federations, bidding nations, sport tourism destinations and sponsors all bid for the high ground through major promotional campaigns in the city.
The inaugural World Sport Destination Expo – the world’s first exhibition and conference dedicated to showcasing the $600 billion a year sport tourism industry -  has been purposely scheduled to take place in the final week of the 2010 FIFA World Cup at a time when Joburg will be the world’s sport tourism capital.
Other venues, such as Rustenburg and Nelspruit and Polokwane are within striking distance to the north by car or bus.

Nelspruit is the capital of the Mpumalanga province, formerly Eastern Transvaal, on the Crocodile River. It’s also a main stopover point for tourists travelling to the Kruger National Park and to Mozambique.

Fans intending also to take in Cape Town and Port Elizabeth in the south will need to study the flight schedules given the lack of European-style inter-city trains.

Along the coast Port Elizabeth sells itself to tourists as the country’s watersport capital. Heading up across to the east of the country takes in Durban, the busiest port in Africa and the largest city in KwaZulu-Natal.

Durban was also where the World Cup qualifying draw was held in December 2007 – and thus the starting point for the active footballing odyssey.