Bemusement was shifting toward outright anger today as passengers arriving at London Heathrow were greeted with news of further delays.

Operator BAA was in the firing line, with airlines expressing disbelief at the continued disruption at the airport.

Passengers were forced to spend the night sleeping on cold terminal floors, with little prospect of respite.

Exacerbating the anger was news many would not now be able to board flights until after Christmas – ruining the festive season for thousands.

In a virtually unprecedented step, Terminals one and three at Heathrow were yesterday closed to new arrivals as staff battled the backlog.

One of the two runways at the airport – cited as the busiest in Europe – remained closed, as a shortage of de-icing equipment saw planes restricted to stands. 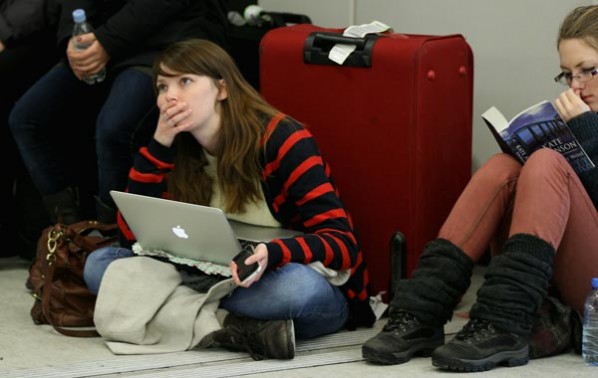 Passengers have been waiting days for departures from Heathrow

Transport Secretary Philip Hammond also warned there was no prospect of many of those hoping to fly from Heathrow completing their journeys by December 25th.

He went on to brand preparations at Heathrow “totally inadequate”.

“The reality is that, with further severe weather forecast, Heathrow is likely to be operating at reduced capacity for the next few days and passengers need to recognise it may not be possible to reach their planned destinations this week,” added the transport secretary.

BAA chief Colin Matthews offered an apology to passengers for disrupting festive plans, but as many bedded down for a third night it fell on deaf ears.

Speculation is mounting Matthews may now be forced to resign.

In damaging revelations it emerged yesterday Spanish-owned BAA has spent just £500,000 more this year on winter weather equipment at Heathrow.

This is compared with £8 million invested by the new owners of Gatwick.

BAA has in the past attracted criticism for investing in lucrative retailing at its airports instead of the operational side.