Emirates, the Official Carrier of the 2009 Arabian Travel Market (ATM), will mark 16 years as a loyal participant and supporter of ATM, as it opens its stand to trade representatives from across the globe on Tuesday.
Ahmed Khoory, Senior Vice President - Commercial Operations, Gulf, Middle East and Iran, said: “Emirates is a longstanding supporter of ATM, one of the industry’s leading travel and tourism exhibitions.  Like Emirates’ route network, ATM unites key players from six continents and it is important that we play a role in the meetings, business, seminars, networking and relationship building that the ATM is well known for.

“While the travel industry may have slowed, Emirates continues to push ahead. We are actively seeking growth opportunities and putting in place building blocks for future development. Tourism is an integral part of Dubai, and the ATM is a great platform to showcase the city’s infrastructure, as well as the thriving and diverse travel services available in the marketplace. We look forward to seeing what this year’s ATM has to offer.”

Once again taking pride of place within ATM will be the eye-catching Emirates Globe. At 9.5 metres high and with a circumference of 65 metres, this mammoth rotating structure has been rejuvenated with some impressive new display features.

Showcasing some of the Emirates Group’s most exciting new developments the stand will encompass exceptional displays of the world-renowned luxury Al Maha Desert Resort & Spa which is celebrating its tenth anniversary this year. The stand will also feature Emirates’ second conservation-based resort, Wolgan Valley Resort & Spa which is scheduled for soft opening this October in Australia’s Blue Mountains. 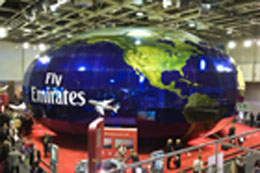 “The Emirates Globe continues to be a standout exhibit at ATM. It has been carefully constructed to reflect Emirates commitment to quality and service. This year we have once again worked hard to ensure the stand is equipped to handle the plethora of visitors it has continued to experienced since the stand was first displayed in 2007,” added Khoory.