Abu Dhabi has officially opened the doors to its purpose-built Volvo Ocean Race‘Destination Village’ on its Corniche breakwater as seven-time Grammy Award winning rock band, Coldplay, ushered in the New Year as part of celebrations for the emirate’s historic, fortnight-long hosting of the gruelling 39,000 mile round the world ‘Everest of Sailing’.

Coldplay, whowill take to a purpose-built stage adjacent to the main village, is organisedand promoted by Flash Entertainment and presented by Abu DhabiTourism Authority (ADTA).

Open daily from11am-11pm, with extended weekend hours, the free-to-the-public DestinationVillage is the focal point for a wealth of on and off water activities,entertainment, concerts, rides, sailing schools, games and competitions, aswell as all the Volvo Ocean Race action, until the six-strong fleet leaves onthe third race leg to Sanya, China on 14th January.

“With this hosting we are writing race history as this is the first time the fleet hascome to the Arabian Peninsula and that in itself is something to celebrate,”said Al Muhairi. “Added to this, of course, is the fact that we have our ownteam participating and we are looking to residents and visitors alike to turnout to give Abu Dhabi Ocean Racing a distinctly Arabian and memorable homecoming. 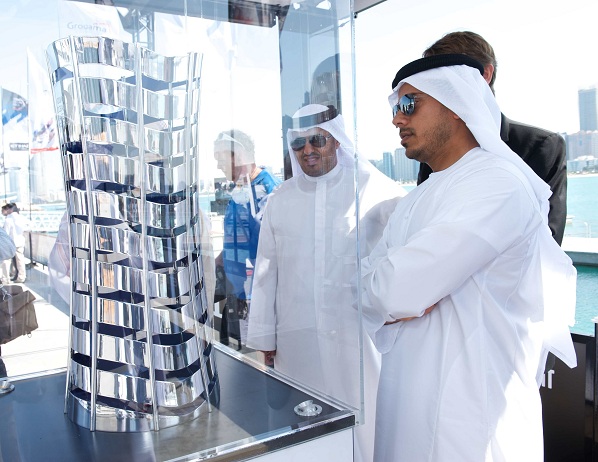 His Highness Sheikh Sultan watches the special 3D movie in the Destination Village with race CEO, Knut Frostad and delegates.

“The hosting of the impressive Volvo Ocean Race fleet gives the destination a compelling opportunity to welcome thousands of sailing fans from around the world who arepassionate followers of this event and to clearly demonstrate Abu Dhabi’sexcellent credentials as a winter sailing destination. We have great winter weather,warm, clear waters, superb marina facilities and an increasing number of yacht and boat charterers, sailing schools and activities for this high-end marketsegment to leverage. I hope many of the keen sailors visiting Abu Dhabi for thefirst time to link up with this superb event discover enough to entice themback to our shores again.”

For KnutFrostad, entry of the race fleet into the Arabian Gulf for the first time inthe event’s 38-year history represents the turning of a new chapter in the Volvo Ocean Race impressive annals.

“Abu Dhabi has been nothing short of outstanding in its commitment to the Volvo Ocean Race both in terms of developing a state-of-the-art vessel to compete, in compilinga truly international team and in creating a stunning stopover destination thatwill serve as a benchmark for many in the future,” said the race CEO.

For sailing fans of all ages, the village is hosting a number of topsailing clinics to give both those new to the sport and seasoned veterans achance to get involved. 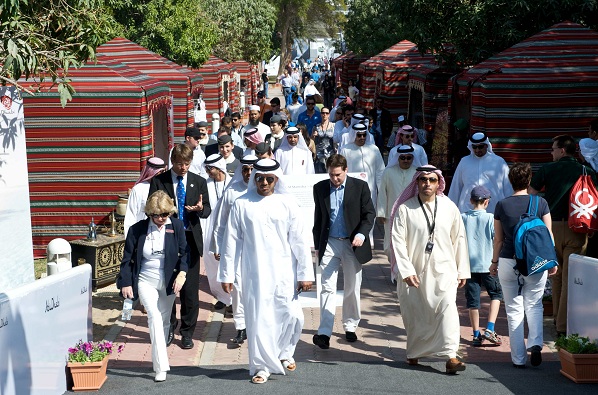 One of the mainhighlights will be the Abu Dhabi Junior Sailing Festival onthe 3 and 4th January, which is being run by Etihad Airwaysand Abu Dhabi Sailing & Yacht Club (ADYSC).

Comprising a two-day junior sailing course for novice and advanced young sailors,aged between eight and 12 years, the festival will introduce children to thesport and improve the skills of regular young sailors.

In addition, theVolvo Ocean Race has brought a fleet of branded 5.6 metre Ludic dinghies to AbuDhabi and has invited local children from each of the stopover ports to visitthe Destination Village for a day to get out on the water and have some fun asthey learn the basics of sailing in a safe and enjoyable environment.

And for those not wanting to get out on the water, Volvo Ocean Racehas its ‘Life At The Extreme’ exhibition, which includes rides and entertainmentthat lets fans experience first-hand this ‘Everest of Sailing’.

Top attractions include The Ride, a state-of-the-art simulator that gives the feeling of being onboard a Volvo Open 70 yacht at speed in extremeconditions whilst being bombarded by strong winds and spray; The Dome, a 40person interactive 3D cinema; The Grinding Challenge, where you can pit yourstrength against your friends on the pedestal grinders which the crews useonboard Volvo Open 70s; and Air Balls, which gives kids the chance to ‘run’ onwater.

The Volvo Ocean Race fleet – which includes the UAE’s Abu DhabiOcean Racing team – will also be in action over the fortnight. Expected toarrive Wednesday afternoon, the fleet will compete in the in-port race on the13th January, the first points scoring competition in Abu Dhabi, aswell as for the leg three start on 14th January.

Whilst in the capital, the stunning Volvo Open 70 race yachts, thefastest in the world, will be on display at the Destination Village, allowing fansto get up close to these ultimate sailing machines, and to get behind thescenes and see the shore teams carry out repairs and modifications.

A weekend of traditional dhow racing will also take place over the6-7th weekend, with more than 130 22 foot and 60 foot dhowscompeting off the coast for top honours.

Ensuring a buzzingsocial scene down at the village, ADTA and its stakeholders are also staging anumber of entertainment and interactive activities.

A traditionalArabian souk – Souk Al Mamsha - greets village visitors, giving them theopportunity to experience and take home their own piece of Arabia from one ofits many market stalls. Cultural performers from the Emirates Heritage Club areproviding a glimpse of traditional Emirati culture and lifestyle. Falconrydisplays, henna tattoo artists, calligraphy demos, and traditional food & drink are all on offer daily within the village entrance exhibition area.Traditional music and dance performances are performed on the Main Stage twice daily in 30-minute peak-time shows.