Abu Dhabi’s rapid rise to tourism superstardom is set to continue to another level this year, with the opening of the world’s first Ferrari theme park.

Sitting under a roof designed in the style of the classic double-curve body shell of a Ferrari GT car, Ferrari World Abu Dhabi covers more than 200,000 square metres.

It will be on Yas Island, located on the north east side of Abu Dhabi’s mainland.

As well as being the world’s biggest indoor theme park, Ferrari World will also boast the world’s fastest rollercoaster ride, which is expected to reach speeds in excess of 120mph to help emulate the sensation of speed and acceleration in a Ferrari Formula 1 car. The ride will take thrill seekers 62 metres into the air, out of the top of the roof, before plunging straight back down again.

There will also be a number of high tech racing car simulators, as used by the Ferrari racing team, plus a flume ride which takes you on a journey through the engine of a Ferrari 599.

The park also features a driving school, with expert tuition available for aspiring racing car drivers. As well as the high speed rollercoaster, there are a number of gentler rides as the park caters for children of all ages.

Ferrari World is just one of a dazzling array on new features being created on Abu Dhabi’s Yas Island.

The 2,500 hectare island, strategically located between the coast and the city of Abu Dhabi and Dubai, boasts a range of world-class hotels, theme parks, golf courses, mega malls, apartments and villas, and much more.

Following recent soft-opening trials, Ferrari World is expected to open to the public on October 28th.

“Ticket prices will be released as we move closer to the opening date,” said Ferrari World in a statement, while promising to offer guests great value for their money. 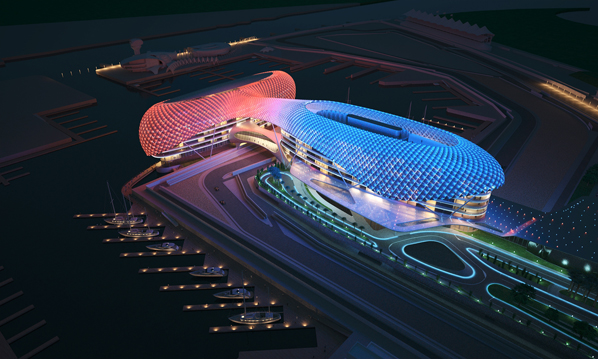 Jewel in the F1 crown

Yas Island is home to the jewel in the Formula 1 racing crown, the Yas Marina Circuit. Bernie Ecclestone, President of Formula One, described the circuit as “one of the most exciting tracks I have ever seen,” – high praise indeed for the venue of the inaugural F1 Etihad Airways Abu Dhabi Grand Prix, which was held last November.

From the twisting Singapore-style street sections to the Monaco-style marina, the Yas Marina Circuit serves up an array of driving challenges for the world’s best drivers.

Soak in the action of the Grand Prix from the viewer-friendly grandstands or go for the more luxurious route of the Marina Hotel and other VIP hospitality dotted around the track.

Another option for those with a nautical frame of mind is to view the Grand Prix from your vessel moored at the iconic Yas Marina.

However, the conclusion of the 2009 F1 Etihad Airways Abu Dhabi Grand Prix will not spell the end for motoring enthusiasts.

The state-of-the-art circuit will host a full calendar of motorsport events and entertainment concerts throughout 2010, including events in the GP2 Asia Series and Australia’s legendary V8 Supercars motor racing series.

Top fuel dragsters will also make their Middle East debut this year at the International Drag Racing Festival, while an adrenaline-fuelled go-karting complex is on offer to those seeking to personalise their racing experience.

The 2010 Formula 1 Abu Dhabi Grand Prix is also expected to return to the Yas Marina Circuit on November 14th. 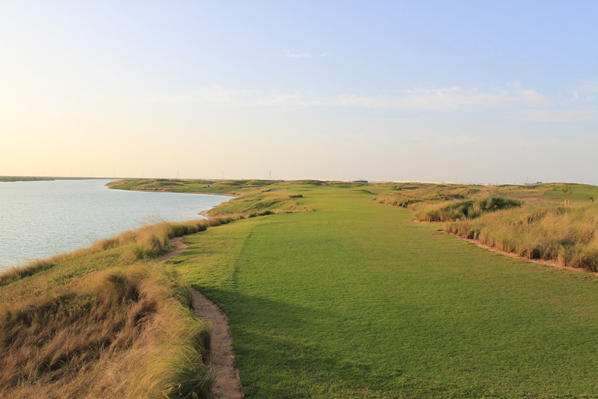 The island’s flagship Yas Hotel is like no other, with its truly breathtaking location set half on land and half on water, and looming majestically over the Yas Marina Circuit. You won’t find a hotel quite so excitingly distinctive, inside and out, anywhere else in the world.

With its colour-changing LED shroud, the incredible gridshell can be seen for miles around and mimics the throw of a local fishing net, while the architecture embraces the environment perfectly.

Design influences everything at this mesmerizing Abu Dhabi hotel, from the furniture in the 499 contemporary and modern rooms and suits to the striking interiors of the 14 restaurants and lounges.

Situated on the Yas Marina, the Yas Hotel boasts an impressive ten treatment room spa, gym and rooftop swimming pool. The pools are already operational, while the spa will open later this year.

The course will be a first of its kind for the region, designed in line with the traditional form of links golf commonly associated with the coastal towns of Scotland and Ireland. The 7,450 yard, par 72 championship course lies to the west of Yas Island with all 18 holes having coastal views.

There are over 20 further hotels planned for Yas Island. Designed and operated by some of the biggest names in the business, they will feature state-of-the-art facilities such as spas, health clubs, restaurants and lounges.

The northern crescent of the island and the beachfront esplanade will be dotted with luxury resorts and hotels to meet the needs of every kind of traveller and holidaymaker looking to relax in unique surroundings.

A development by Aldar Properties, Yas Island was selected as the ‘World’s Leading Tourism Development Project’ at the 2009 World Travel Awards.