Following the launch of the Azerbaijan Tourism Board last year, the destination has begun to see its star rise in the global hospitality market.

Here Breaking Travel News editor, Chris O’Toole, touches down in capital Baku to see how the country is battling overcome its Soviet heritage.

Baku, capital of Azerbaijan, is an oil town.

Like its famous cousins, Houston in the United States, Calgary in Canada and even Aberdeen here in the United Kingdom, the success of the economy hangs on the price of oil.

Visitors to the boulevard which runs along the seashore will see the familiar rainbow colours glistening on the waves, while an acrid scent hangs in the air.

Oil rigs can be seen just off the coast, while a refinery is a few moments from the city centre.

During the Soviet period, the oil itself, as well as the cash it generated, was expropriated to meet the needs of Russia and its people.

Following the bloody demise of the occupation in the early 1990s, Azerbaijan has been able to reclaim its wealth and begin to rebuild the country. 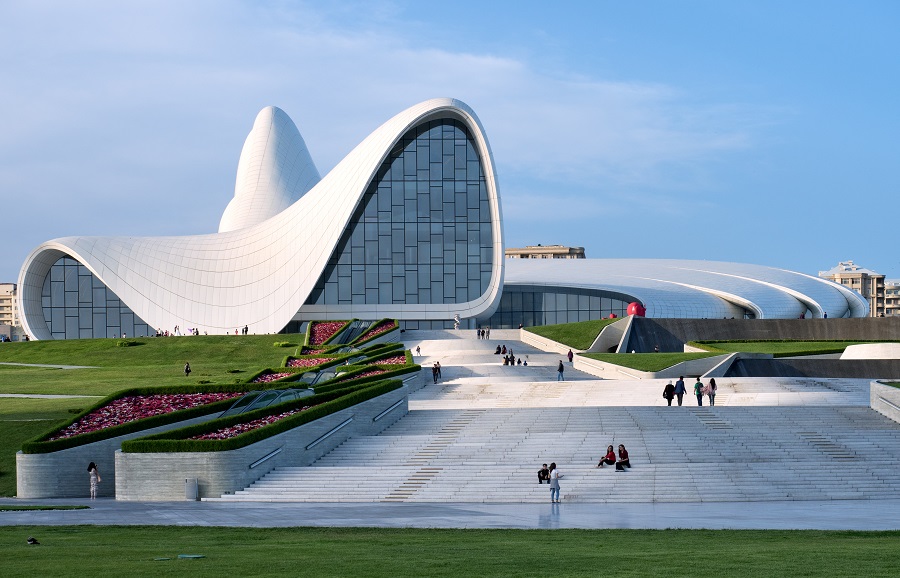 The resulting boom has transformed the skyline of the capital, and there have been some remarkable successes.

The Flame Towers (home to Fairmont Baku) have become an instantly recognisable symbol of the country, while the Zaha Hadid-designed Heydar Aliyev Centre is surely one of the most impressive buildings anywhere in the world.

Guarded by fortifications dating back nearly one thousand years, the UNESCO-recognised Old Town has been thoroughly refreshed and is now packed with travellers from Russia, India and the GCC.

At the centre stands the Maidan Tower, which has served as a beacon, fortification and, more recently, home to an international arts fair during its long life. 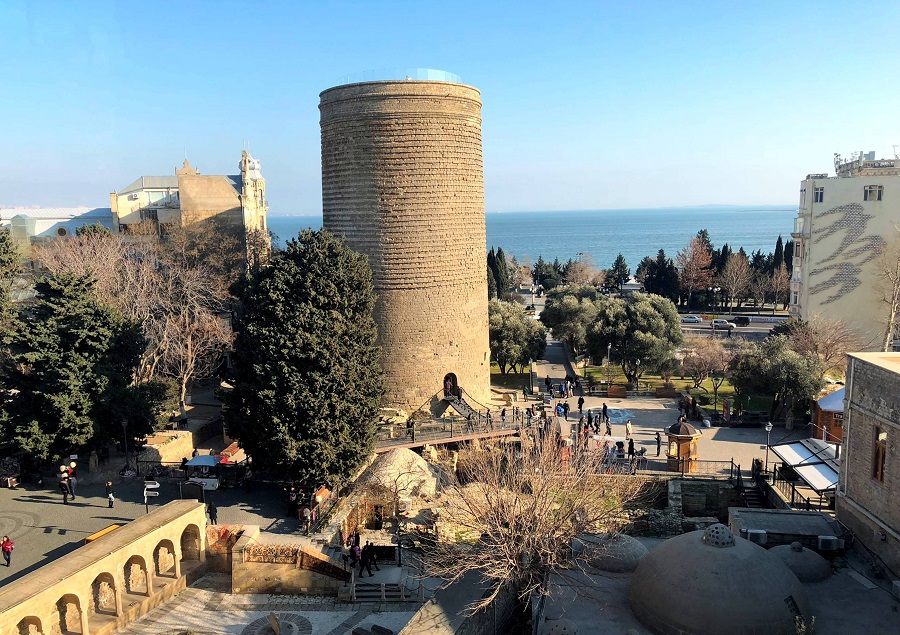 Walking through the clean, bright streets, it is possible to believe Baku has fully emerged from the damage caused by the Soviet occupation during those long years that made up much of the last century.

The impressive Four Seasons sits on the waterfront promenade, offering spectacular views over the Caspian Sea, while Hilton and other international brands gather around Freedom Square.

Everywhere in the centre of Baku there seems to be a feeling of optimism, with the wealth generated by oil invested in regeneration.

Walk along Nizami Street, the largest shopping boulevard, and you will see locals chatting in cafés, looking for bargains or drinking in the bars.

Though Azerbaijan is a Muslim-majority country, the leadership of president Ilham Aliyev is secular, meaning alcohol is permitted and that social mores are closer to Europe than the Middle East.

Given the Soviet heritage, guests can also speak Russian with many locals. 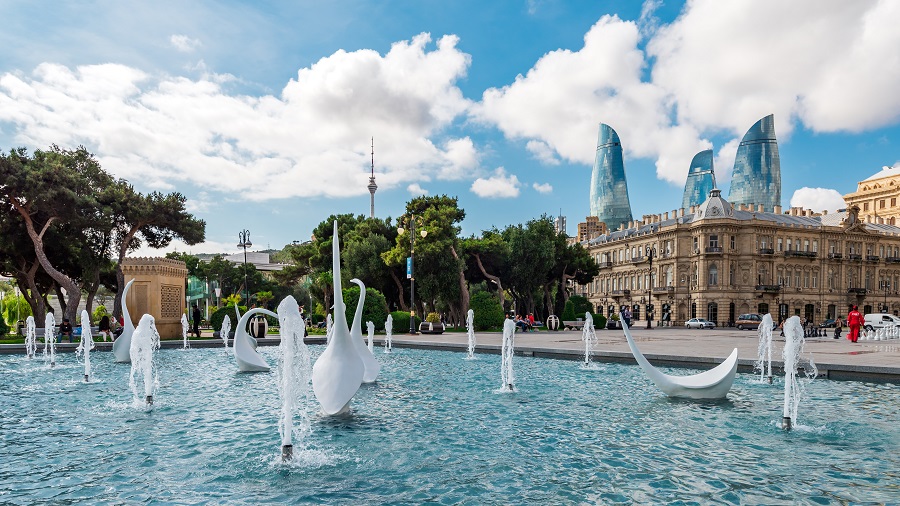 While all the key tourist sites in Baku have been built in the last decade, there is also a great deal more to come.

Located on reclaimed land on the Caspian Sea, the Deniz shopping centre is scheduled to open next year.

When complete, the structure will appear as the star in the Crescent development to form a citywide architectural marvel.

The Crystal Hall, recently host the Eurovision song contest, has also added a new dimension to events in the city, while a dozen or more huge malls offer opportunities for shopping.

In this few square miles of the capital, Baku has fully embraced its return to capitalism with spectacular results. 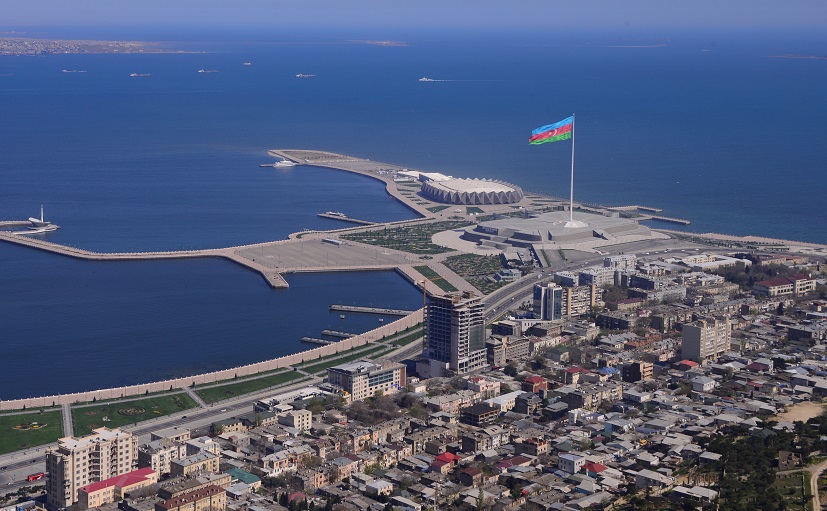 That is not to say all is new in Azerbaijan, with the destination tracing its roots back through millennia.

Historically a part of the Great Silk Road, the country is situated at the juncture of the geopolitical and economic interests of many nations.

As a result, Azerbaijan has a strong historical and cultural heritage, with more than 7,500 natural, archaeological, architectural and historical monuments dotted across the country.

Close to Baku, guests can visit the Ateshgah fire-worshipping temple to trace the Zoroastrian, Hindu and Sikh history of the region, or the Gobustan Preserve, home to 6,000 ancient petroglyphs.

In the capital itself, countless nineteenth-century mansions line the streets, revealing the wealth of the first oil barons who made the city such a success before the arrival of Bolshevism in the early decades of the last century.

Perhaps most famous of all is Yanardagh.

Azerbaijan has historically been known as the ‘Land of Fire’, due to its oil and gas resources, and the natural fires that blazed for millennia on the Absheron peninsula greatly influenced the beliefs of the local people.

Travellers today can visit the burning mountain, where natural gas from the ground keeps a fire alight in perpetuity – a phenomenon apparently only visible in a handful of places anywhere in the world. 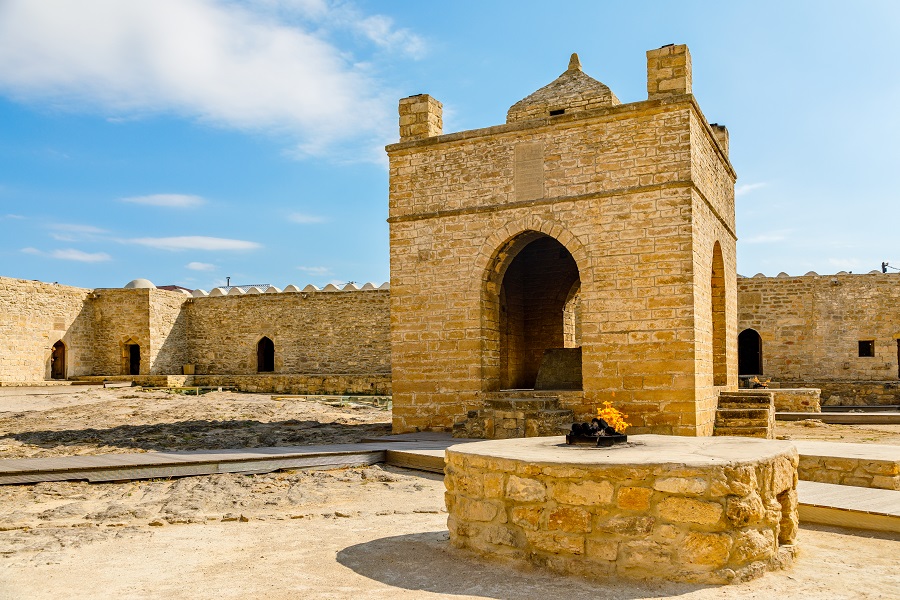 Of course, with this success, there have been drawbacks.

The political leadership of Azerbaijan has failed to shake off the Soviet era, while the capital is also dotted with monuments to excess.

A huge gymnastics centre, swimming pool and football stadium far outstrip the needs of the city, while even the majestic Heydar Aliyev Centre is largely devoid of visitors.

The TV Tower - the shape of which will be familiar to guests who have visited Berlin, Vilnius or any other former Soviet stronghold - also provides a constant reminder of a different era.

At the same time, while Baku has been able to reinvent itself, becoming in many ways a modern city, the rest of the country has been largely left behind.

Travel out of the capital, toward the mountains in the east of the country, and the landscape quickly changes.

Here Mercedes are replaced with Ladas, groups of men sit on street corners playing dominoes and the occasional donkey wanders past – it really is like going back in time.

Oil wells, the source of the national wealth, blight the landscape, with hundreds dotted across the barren scrub land that makes up the interior of Azerbaijan.

While infrastructure is developing, authorities are still working to overcome decades of neglect.

Main roads are freshly laid, but venture away from the major cities and you quickly find yourself on dirt tracks winding your way through the mountains – exhilarating, but a different world to that of Baku.

The oil money has a long way to go before it reaches citizens in the regions, and with concern over the damage being done to the environment quickly rising up the political agenda, it may never do so. 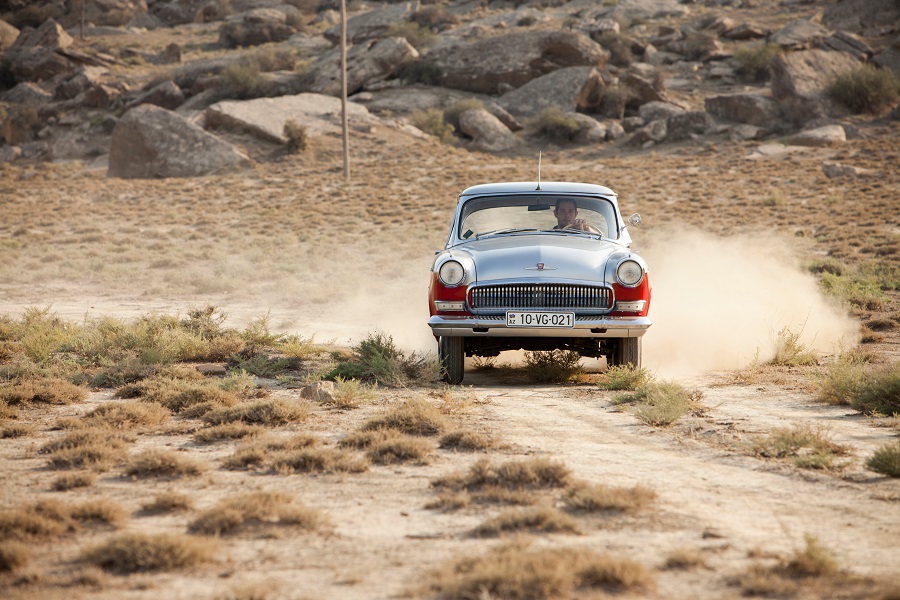 One ray of success away from the capital has been wine, with Azerbaijan long considered one of the bases of global viticulture.

The vineyards of the Caucasus foothills produce a bounty of grapes that soak up the sunshine, producing vintages that are likely to surprise unsuspecting oenologists.

Azerbaijan’s wine industry has been expanding rapidly over the last decade – but here again the Soviet impact can be felt.

Prohibition in the 1980s decimated the sector, with Azari wine falling behind the booming Georgian export market.

However, with extensive investments in top quality technology, and a playful experimentation with internationally renowned grape varieties, local alternatives are beginning to recover.

Visitors can explore a few famous wineries as well as participate in wine experiences and festivals – with the Savalan vineyard a good place to start. 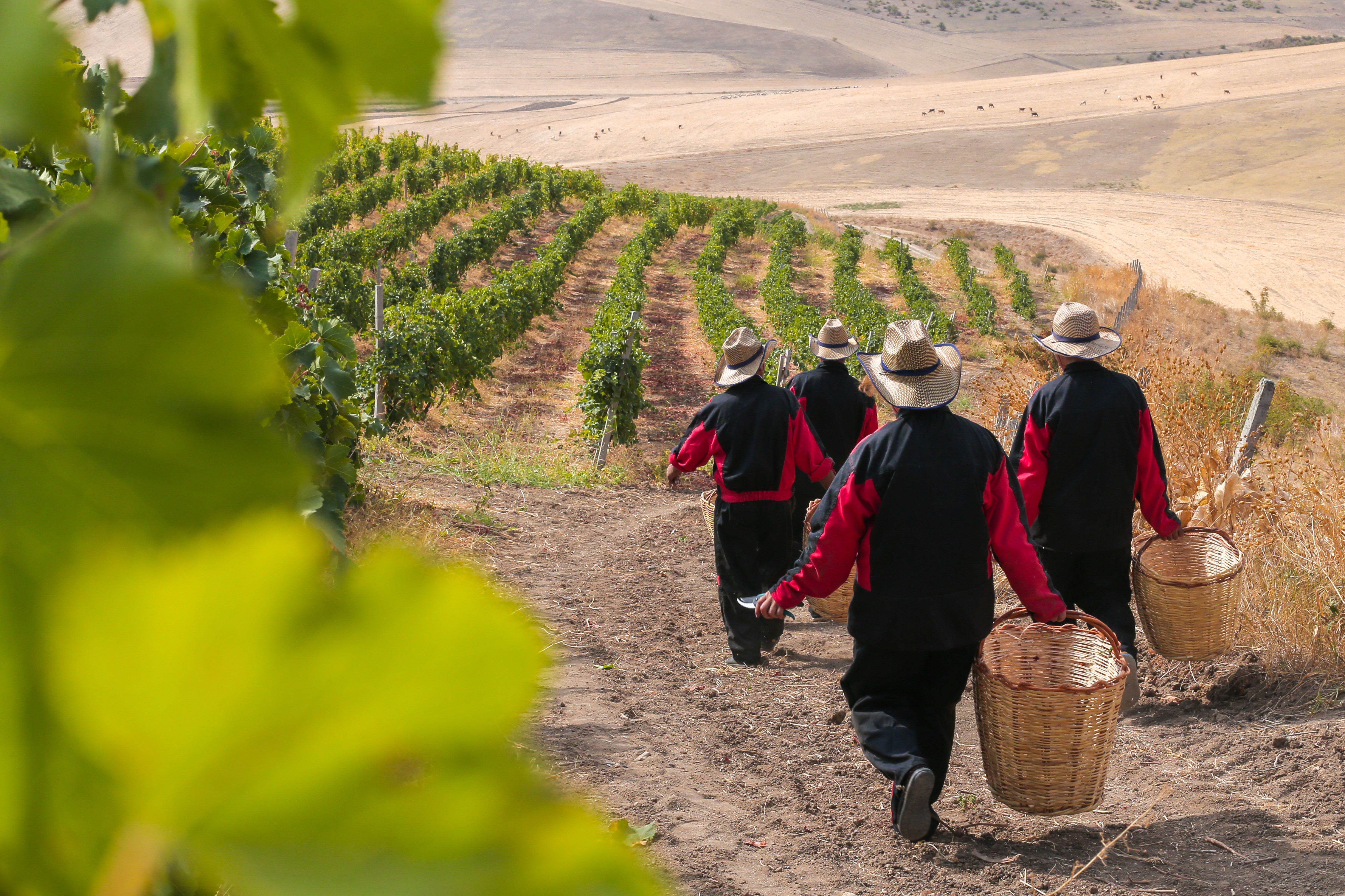 The Azerbaijan Tourism Board, officially launched just last year, has been doing its part to overcome the divide between Baku and the interior.

Spreading the value of tourism across the country, the organisation has been successful in driving up visitor numbers by 11 per cent this year compared to last.

With a clear ambition to double inbound tourism by 2023, the increase in visitors is partly due to an intensive global marketing campaign as well as an increased appetite among travellers to seek out lesser-known destinations. 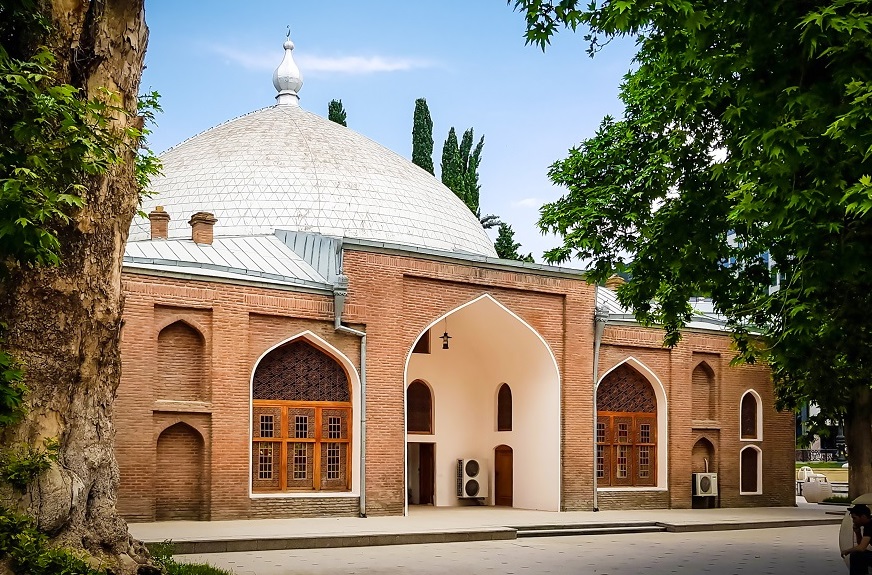 Looking ahead, there are plans to increase tourism beyond Baku, with the tourist board is looking to launch new visitor centres, including one close to the mud volcanoes which can be found on the outskirts of the city.

As Florian Sengstschmid, chief executive of Azerbaijan Tourism Board, explains: “In Azerbaijan, we are opening further visitor centres at our unique mud volcanoes site and launching destination marketing organisations in the beautiful cities of Ganja and Lankaran to support sustainable development of tourism.

“We are welcoming an increasing number of film crews to discover our spectacular landscapes, including summer countryside and winter ski slopes, adventure trails, and cultural events.”

Find out more above about how the Azerbaijan Tourist Board plans to put the country on the map as Breaking Travel News chats with chief executive Florian Sengstschmid.

Or, for more information about the destination, visit the official website.