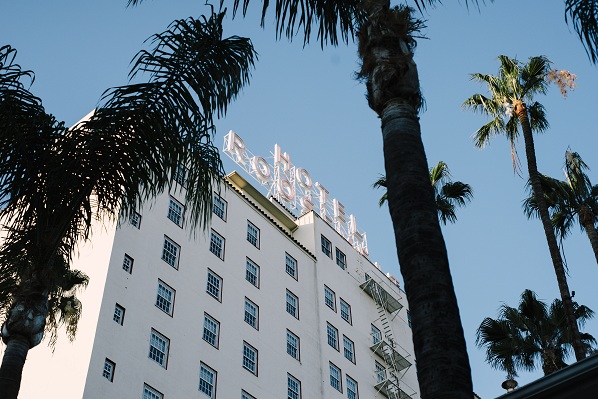 The stars embedded in the Hollywood Walk of Fame gleam a bright gold in the afternoon sun.

Celebrity names smile up at the sky and the wide eyes of the passers-by, recalling the famous company kept here in Tinseltown.

I’m en route to the Hollywood Roosevelt Hotel, one such star-studded haunt of old.

Not only were the first Academy Awards held here in the Blossom Ballroom, but the hotel has been used as a filming location for films including Catch Me If You Can, Beverly Hills Cop II, and, excitingly, an episode of the TV comedy Curb Your Enthusiasm (for those who are interested, it was ‘Beloved Aunt’).

It has been a notorious retreat for many famous faces, including Charlie Chaplin, Shirley Temple, Prince, Errol Flynn, Brad Pitt and Angelina Jolie, to name but a few.

Famously Marilyn Monroe lived here for two years early in her career and had her first commercial photography shoot by the rooftop pool - and urban legend has it that she never left.

Indeed, it is rumoured that she still haunts the hotel - alongside other eerie occurrences - glowing orbs, sightings of a girl known as ‘Caroline’ and reported mysterious phone calls to the management. Spooky! 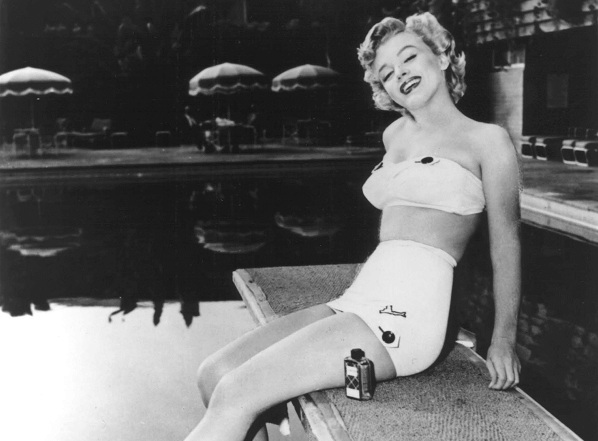 ‘Welcome to The Roosevelt’ I hear a disembodied voice quietly say.

An immaculate, linen suited man has pulled open the door of my taxi.

As I breeze through the double doors and into the hotel foyer, I am Shirley Temple’s dancing feet as I click my way up the very stairs upon which she learnt her infamous dance routine; I am Errol Flynn’s sex drive; I am Marilyn Munroe’s sad eyes.

Certainly, as you walk into the dark, vast leather-clad cocktail lounge The Library Bar, you can’t help but admire the transportative, sumptuous decadence of the decor, echoing a bygone era.

The massive chandeliers and low 1920s style desk lamps dimly illuminate the luxurious chesterfields, the room verily inviting you to curl up with a book and a tipple, while shared intimate moments abound as you look around. 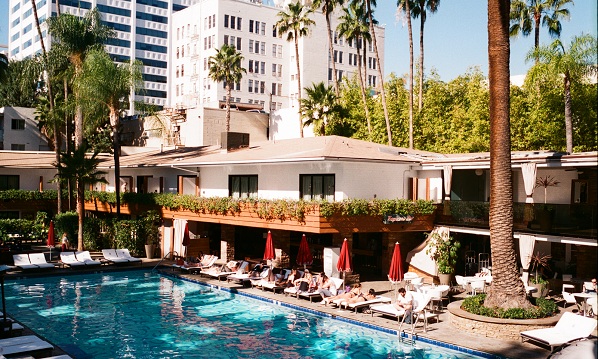 Decadent luxury at the Hollywood Roosevelt

The dreamlike, art deco interior is yet strangely modern, living up to the hotel’s tagline ‘A Modern Hollywood Revival’.

The rooms are similarly paradoxical; a four poster bed is brought up to date with its slick, minimalistic wooden frame; the contemporary bathroom, stylishly tiled, bears timeless touches.

Spotlights surround the mirror and an elegant Hugh Hefner style dressing gown, complete with the nifty ‘HR’ initials on the left breast pocket is provided.

In no time at all I am padding around, drowning in the plush carpet, admiring the classy accents on the walls of muted greens and greys with a glass of champagne in my hand, feeling that by rights, I should be on the verge of some sort of barbiturate induced swoon as it all just…got too much darling…

Reverie broken, I go downstairs to check out the famed Café Tropicana, whose ‘anything-goes’ reputation draws celebrities, tourists and bona fide Angelinas to relax and schmooze, either having a delicious bite at the adjoining outdoor cafe (try the guacamole and the mac and cheese), or reclining on the toweled deckchairs surrounding the pool.

As you gaze down onto the watery pool floor, you’ll see David Hockney’s multi-million dollar mural, a mass of blue painted parentheses intended to emulate the water movement.

It really is a sight to behold, another reason to visit this trendy Californian hangout. 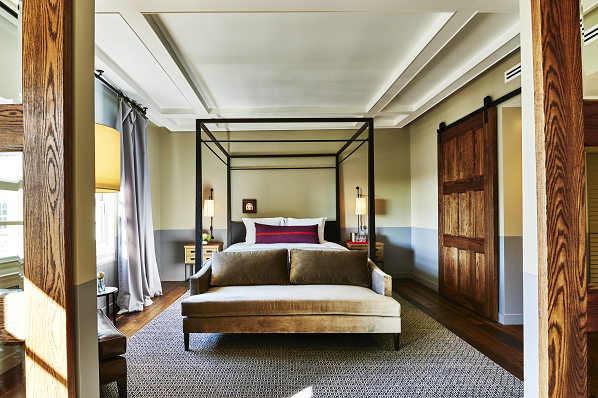 An array of lethal cocktails are brought over by unthinkably beautiful, unobtrusive and mild-mannered staff, who give you that trademark exclusive welcome: the Hollywood Roosevelt again treading that line of faultless service while maintaining a relaxed, friendly feel, making you want to stay later into the night in order to join one of the legendary pool parties held on certain evenings, where small fires are lit around the pool as everyone gets their rocks off to the early hours, Great Gatsby style.

Apart from the excellent choice of food available at the pool café, the hotel offers another two restaurants: 25 Degrees, looking out onto Hollywood Boulevard, with American diner style décor, playing music and offering big n’ simple American fare, read: Californian breakfasts, characterful, bold beers and ‘build your own’ burgers - which are the stars of the show.

The other, quieter restaurant, adjoining the aforementioned Library Bar, offers up something a little more romantic and fancy. 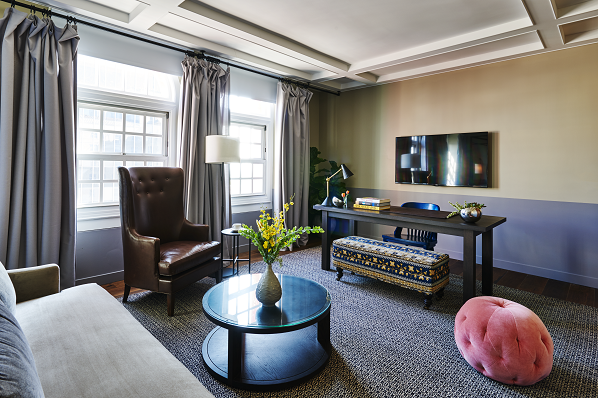 Plush decor at the Hollywood Roosevelt

Enter the ‘Spare Room’ for the evening’s entertainment.

The bowling alley and bar boasts a speakeasy feel with highly polished furniture, books and curious ornaments to wonder at, adorned with palm fronds … although the music that night, an English inspired indie set, contrasted nicely with its outlandish environs.

Donald, our scorer for the bowling, dapper in braces, asks us our bowling names.

It being the West Coast, I plump for ‘Kush’.

He guides us towards the smartest, most darling little golden bowling lanes I’d ever seen.

With the waitress occasionally bouncing over to top up our drinks, it was as if we had the place to ourselves, happily trapped in a retro time warp, with Donald standing by chalking up our scores as the hour went by.

Afterwards in the Lounge Bar, we played some cards and drank punch from a beautifully ornate, metal bowl with a gold rim. It was fabulous.

From the corner of my eye I thought I spied a curvy, blonde bombshell with crimson lips and a glowing smile …but unfortunately here it is all too easy to fantasize and get carried away.

The hotel simply brings to mind a film set with various, immersive realms.

The relaxed poolside is worlds away from the decadence of the Library Bar; the retro feel of the Spare Room’s charms had an altogether different atmosphere, though all the while that sense of old school glamour was the binding glue that makes this place a real testament to a golden age of American history; cultivating those special spaces as portals into another dimension where anything is possible…just like in the movies.

The iconic Hollywood Roosevelt Hotel, which first opened its doors in May of 1927, has recently re-launched following a $25 million renovation.

Since hosting the First Academy Awards in 1929, hotel has become both a landmark attraction and a popular destination for locals and tourists from around the world.

Take a look at his thoughts here.