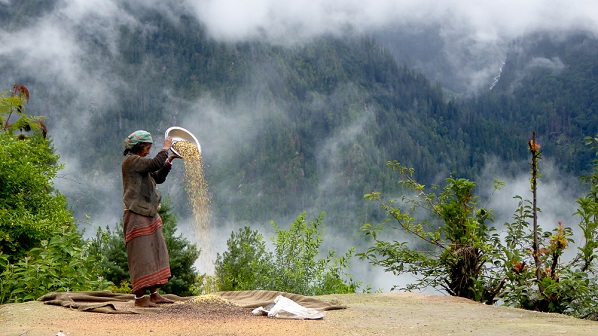 No matter the situation, the people of Nepal never forget to smile.

That, in a nutshell, is the beauty of the country.

In the past year and a half, this characteristic has been tested to the limit, by an earthquake swiftly followed by a fuel crisis.

We travelled to Nepal to see how the country is faring after these events and found that the smiles are bigger than ever and the locals welcoming tourists with such tremendous warmth that it’s hard to believe they’ve had any problems at all.

Nepal is well and truly open for business.

The destination has remained one of the few exotic countries in the world that feel truly safe for visitors, which was a great appeal to us.

With much of the world affected by hostility, Nepal feels like a warm enclave of friendliness and tolerance.

We were able to wander around freely, in the way one would in London or New York, without people paying you too much attention.

Locals would smile and occasionally ask ‘what is you-a name?’ or ‘where are you-a from?’, excited to practice their school-taught textbook English, but wanting no more from us.

Here, there is less of the hard sell so prevalent in much of Asia’s tourist spots, which was a welcome delight.

We started our journey in the capital city, Kathmandu, which is a pleasantly bustling metropolis. 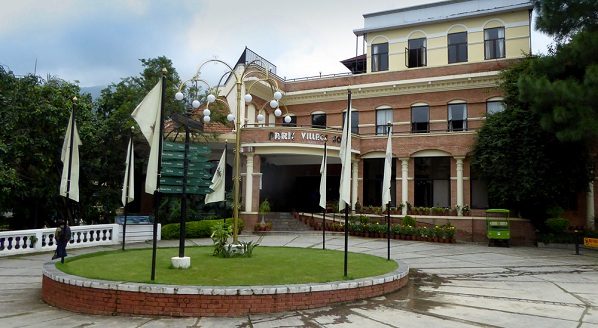 Our hotel, Park Village, in the northern suburbs of the city, offered us a mood of instant relaxation and as we sat by the swimming pool in the lush tropical grounds, it was hard to believe we were in a capital city at all.

Nepal is the home to the Himalayas, the highest mountain range in the world.

Once we had indulged fully in blissful rest, looking up at mountains from our sun loungers, we were ready to go and explore them. We dove in at the deep end by trekking for a month in Humla and Dolpo, the remote so-called ‘Wild West’ of the Himalayas.

These are ancient districts of Nepal, utterly untouched by the modern world.

More than this, the people are unaware that a modern world exists and they live their lives in mediaeval fashion: off-grid, with firewood the only source of heat and cooking, away from telephones, electricity and consumer goods.

Dolpo used to be a part of Tibet and is one of the last enclaves where Bon religion, an early predecessor to Tibetan Buddhism, is still practised.

It was fascinating to see that people still live in this way and we felt like we’d been put in a time machine and transported back 600 years.

While the lifestyle of the villagers was enthralling, the natural beauty of the Himalayas was the truly mind-blowing element. 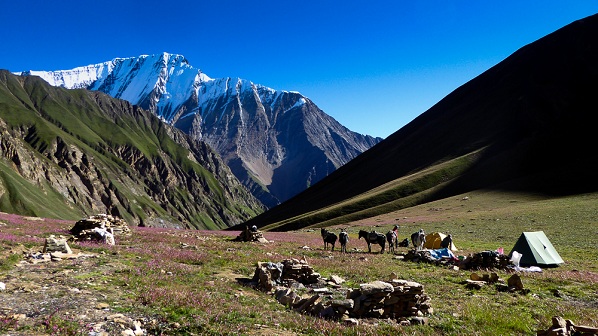 The highlight of our journey was being in Phoksundo National Park.

We took the Kagmara-La pass from Kaigaon to Ringmo and for four days trekked through uninhabited untouched beauty, the kind of which I didn’t think existed anymore in our manmade world.

Upon arrival in Ringmo we were greeted by prayer flags framing the view over Phoksundo lake - a lake of such luminescent turquoise that it seemed like the sun shone from beneath its waters.

Dolpo and Humla are stunning. 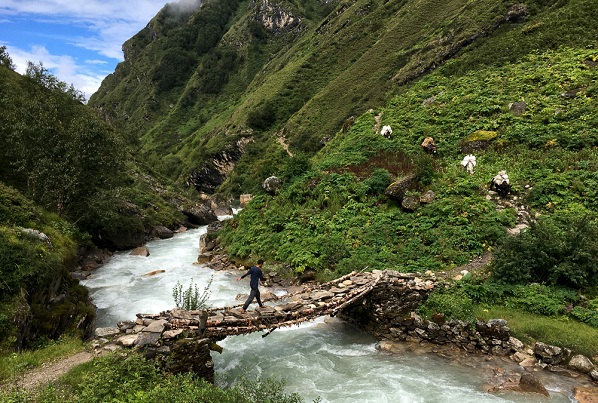 Trekking in Nepal is inspiring, if not always easy

I should also say that trekking in the ‘Wild West’ is tough.

My city-living knees struggled to cope with the endless steep up and downhill that Himalayan walking here demands.

Living conditions, too, are not designed for the luxury minded.

Fascinating though mediaeval living is, luxurious it is not.

If you prefer a gin and tonic or tea and cake at the end of your trekking day, then Pokhara and the Annapurna Circuit offers a very comfortable way to enjoy trekking in one of the prettiest parts of the Himalayas.

But for us, we loved the feeling of getting away from it all, really as far away as it is possible to get from the modern world.

Who knew that time travel was on offer in Western Nepal?! 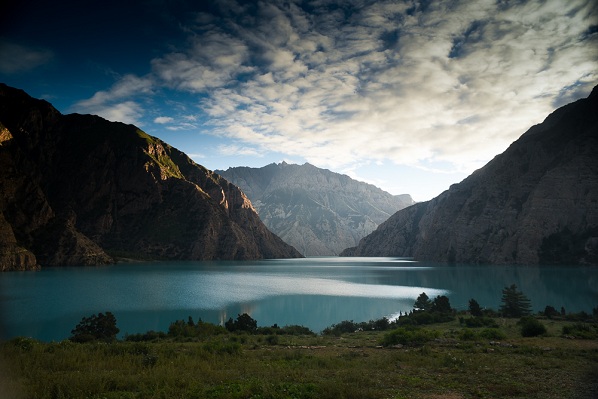 Returning to Kathmandu after our trek, we stayed at the Kathmandu Guest House.

Established in 1967 in a former Rana Palace, this hotel has welcomed many luminaries, including the Beatles on the infamous hippy trail, US Presidents JFK, Jimmy Carter and Bill Clinton, thespians Jeremy Irons and Robert Redford, and mountaineers aplenty including Sir Chris Bonington and Doug Scott.

Despite its famous visitors, Kathmandu Guest House has remained affordable for the budget and midrange traveller.

It’s centrally located in Thamel, Kathmandu’s backpacker haven, where a plethora of restaurants and funky bars refresh visitors in between shopping trips to the numerous outdoor clothing, craft and trekking shops. 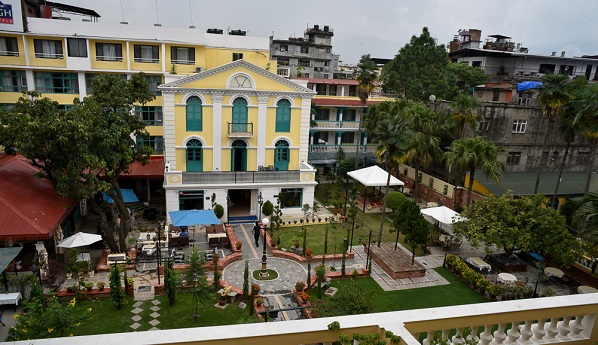 Park Village Resort and Kathmandu Guest House are part of the KGH Group, Nepal’s largest chain of hotels, which is still family run.

It was founded by Karna Sakya, who also conceived of and created Kathmandu’s Garden of Dreams.

The Garden of Dreams is indeed dreamy, a place of fine architecture and delightful plants and water features.

It was one of our favourite places to relax in the city.

It’s easy to see how this garden inspired in all the KGH Hotels a sense of peace and a retreat from the frenetic pace of the modern world.

To further offer peace of mind, every hotel in the KGH group has been certified as earthquake proof by Miyamoto International, the leading global structural and earthquake engineering firm. 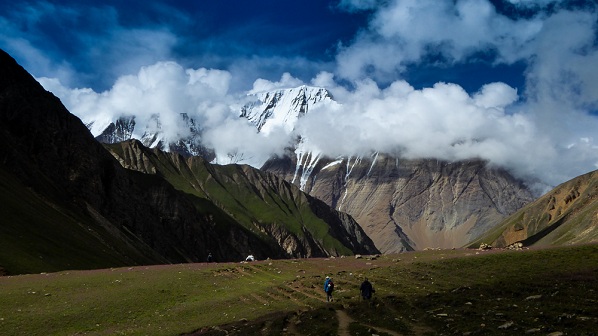 Nepal is home to the Himalayas

There are seven hotels in the group so one could tour the country in their safe hands: in addition to Kathmandu Guest House and Park Village, the newly opened Maya Boutique Hotel offers luxury rooms predominantly to business travellers in Kathmandu.

Outside the city, they have resorts by the lake in Pokhara, starting point for the Annapurna Circuit trek, Chitwan, home of the national park complete with elephant riding, and Lumbini, the birthplace of Buddha.

We certainly fell in love with the country and the sense of perspective on life that being in the mountains gave us has stayed within us long since our return.

If you’re looking for inspiration this year, take a trip to Nepal.

There are so many adventures to be had; the only hard thing about travelling here is working out which one to do first.