It has been a strange few years for tourism in Vilnius.

Last summer the capital of Lithuania sought to brand itself the ‘G-Spot of Europe,’ using the tagline: “Nobody knows where it is, but when you find it, it’s amazing.”

The campaign was a play on the undiscovered nature of the city and an attempt to raise its profile as an exciting option for millennials seeking alternative destinations.

An unlikely success, the city did indeed receive a fair amount of worldwide attention for a relatively small investment.

At the same time, the mini-series Chernobyl has been putting the Baltic city on the map.

While the majority of the powerplant scenes in the series were shot in nearby Ignalina, Vilnius itself stood in for Pripyat, the town closest to the disaster.

Hosting the HBO camera crew was part of a wider initiative to welcome more Hollywood cash to the country, with Lithuania recently introducing a tax incentive exclusively for the film industry.

While there is a debate to be had that passing yourself off as a Soviet backwater in the midst of a nuclear meltdown might not be the most orthodox promotion strategy, Vilnius did again reap the rewards.

According to data collected by the Lithuanian department of statistics, a total of 603,714 guests stayed in accommodation in the city during the first half of the year, spending a total of 1,077,405 nights.

The figures are up by 12.5 and 9.3 per cent, respectively, when compared to the same period of last year.

Most guests came from nearby Poland, Belarus, Germany, Russia and Latvia, with smaller numbers visiting from western Europe and the United States. 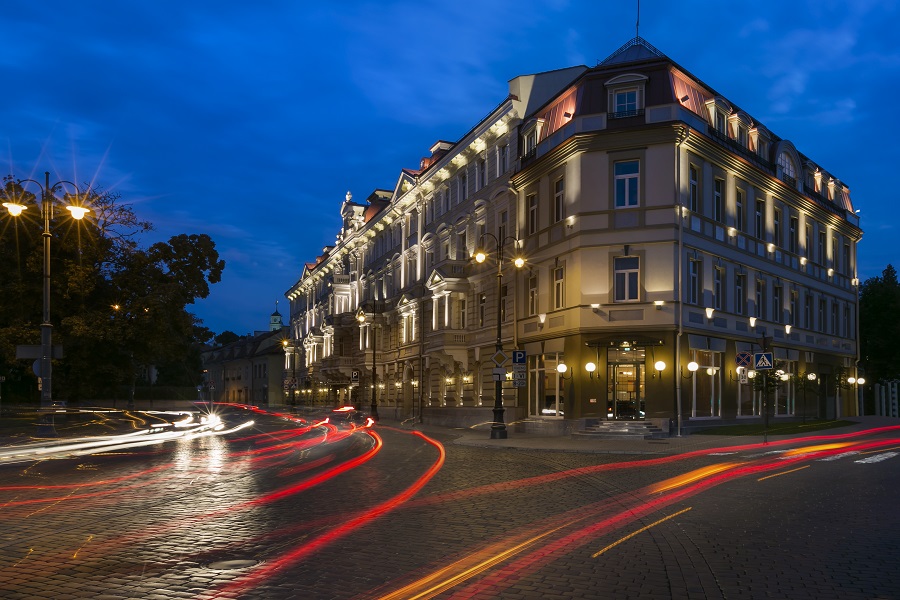 One of the pioneers of this developing hospitality market has been Grand Hotel Kempinski Vilnius.

Opening in September 2012, the property has become the preeminent destination in the city and a benchmark for luxury travel in Lithuania.

As Kai Schukowski, general manager of the hotel, tells me over coffee: “We really are in the heart of the city – which is great for the holidaymakers and business travellers who come here.

“The city is so walkable, most of the offices, embassies and attractions are easily within reach.

“The amount of VIP delegations we receive is incredible - if you are an international dignitary passing through Vilnius, you will stay with us here.

“There is no real competition – so every other week we welcome a president or a prime minster to the hotel.”

He adds: “This is a motivation for our team as well – okay, you might not get a selfie with a celebrity, but you learn how to host these top people, what they expect.

“This is very rewarding and a real positive for a career.”

Indeed, the evening before our meeting I had seen Cristiano Ronaldo and his entourage (i.e. the rest of the Portuguese national football team) being swept into the hotel passed a sea of adoring fans - what higher endorsement can you ask for? 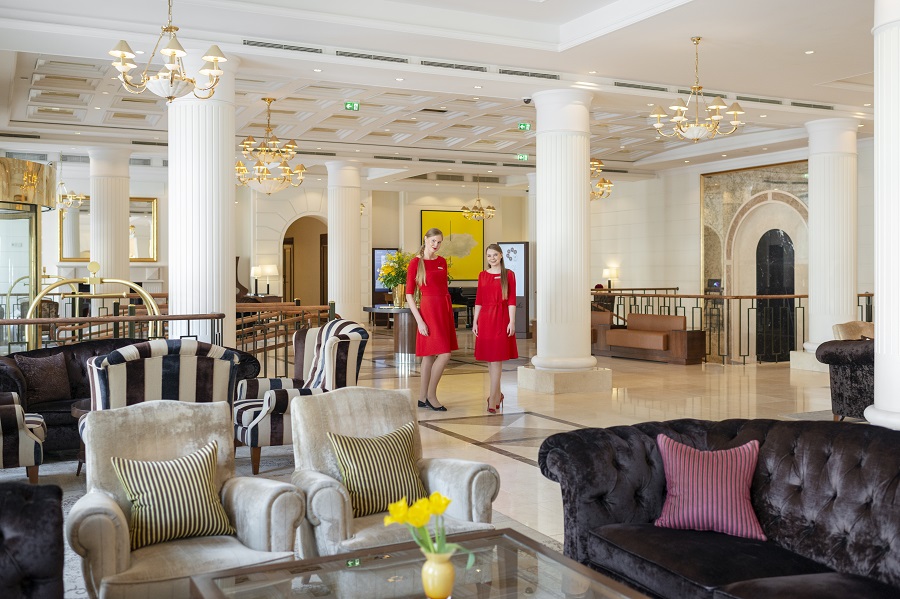 However, given its contemporary place at the centre of the Vilnius tourism sector, it is easy to forget a luxury hotel is only the latest incarnation for the building now occupied by Kempinski.

After completion at the dawn of the 20th century, it initially found fame when the Tsarist government hired it as the state treasury.

Before 1945 the location also spent time as Gabetner Wolff’s bookstore, Pac chocolate manufactures, the Prospiešnia publishing house and a pawnshop that took in different objects, including gold and fur.

A Jewish gymnasium, font foundry and bindery also found their homes there.

Under Soviet occupation in the post-war years the building was commissioned as the centre of the national telegraph network, a part of its history today commemorated in the Restaurant Telegrafas. 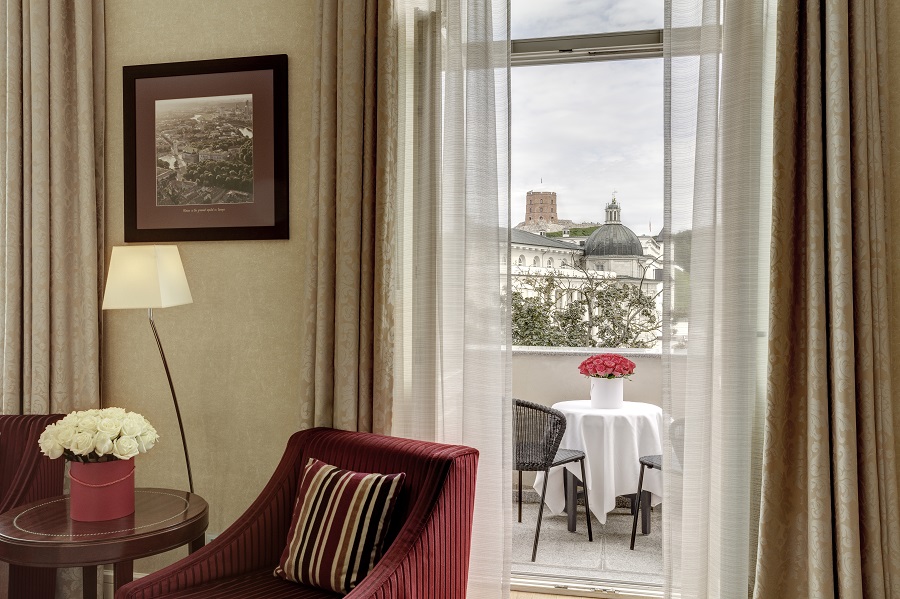 Today this long and storied history is one component of a truly top-class luxury offering.

As Schukowski adds: “This is the smallest hotel that Kempinski has, with just 96 rooms in total – it is very boutique, which allows us to offer a very personalised service.

“In terms of quality, this puts us close to the top of many rankings.

“The owners spent €45 million bringing the property up to standard – and we operate it on their behalf.”

He continues: “But I always tell my team, we must not celebrate that we are the benchmark in the country, we must compare ourselves to Riga and Tallinn.

“We compare ourselves to the luxury hotels there, their numbers, their services, in order to remain competitive.”

This success has been recognised by voters at the World Travel Awards, who have selected the property as Lithuania’s Leading Hotel for the past three years.

Schukowski explains: “This confirms to us we are doing the right thing, to our employees, our owners, that we are on the right path.

“It is a nice reconfirmation, something to celebrate with the team, because they all work extremely hard.” 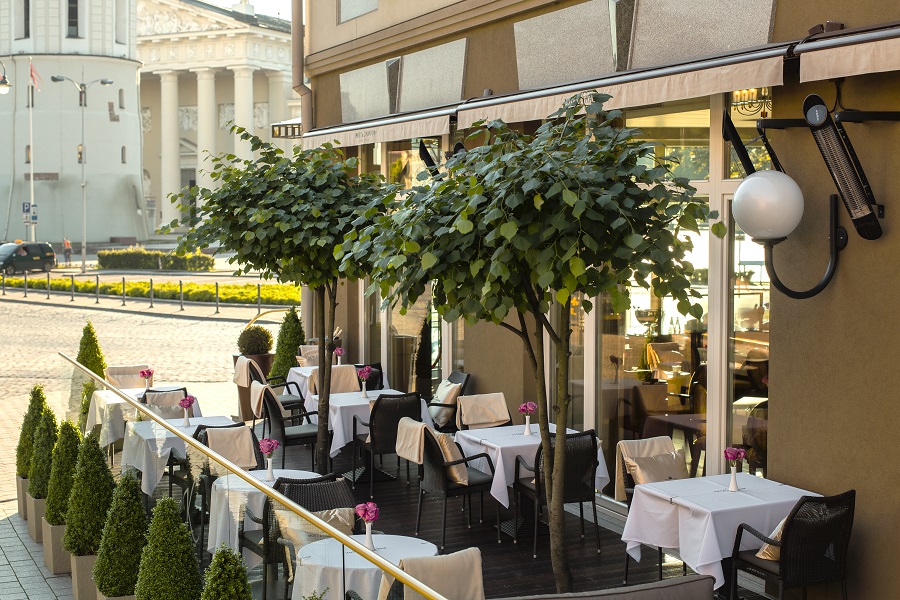 Indeed, a strong service culture is a prerequisite for success in the Lithuanian hospitality sector.

As a relatively affordable destination, visitors to Vilnius have traditionally been quite price sensitive, leading many to select apartments for their stay.

In return, a luxury hotel must offer something different if it is to succeed.

Schukowski continues: “There are a lot of apartments in Vilnius; the city is not known to be a luxury destination yet.

“It is no longer a cheap destination, you can see that from the prices, but private residences are still seen as the most attractive option - and this can hurt the hotel sector.

“A lot of travellers from Poland, Belarus and elsewhere are very price sensitive, and they prefer residences.

“In response, you really have to live up to expectations.

“We do charge a premium rate, but we offer differentiators - in terms of service, security and location - that justify this.

“With such a small number of rooms, we are able to maintain that premium rate, but it would not be possible in a larger hotel.”

Visibility in the United States has also proved vital to the success of the hotel, the general manager explains.

He adds: “We have a 50/50 split between leisure and business travellers, with the United States as the most important market year-round.

“We are well located for a lot of the headquarters for American firms and their European offices, while we are also close to the United States embassy and the NATO base.

“Vilnius is also considered the ‘Jerusalem of the north,’ with a large Jewish population.

“During the war, a lot of these residents migrated to the United States, with their descendants now returning to trace those roots.

“There are a lot of connections there.”

Schukowski concludes: “We have also just become a Virtuoso hotel, which is a great achievement – we have seen a number of bookings already.”

With a storied past, unrivalled location and head-start on the developing tourism market in Lithuania, Kempinski has a bright future in Vilnius.

Grand Hotel Kempinski is located in the very centre of Vilnius Old Town.

Right on Cathedral Square, it offers easy access to all the major tourist attractions in the city.

With the card, guests will have the opportunity to visit museums free of charge, participate in walking tours and hop-on/hop-off tours, get discounts for renting bikes, take boat tours or jump on scooter and bicycle tours.