Glasgow will revel in the international spotlight as the host of the 2014 Commonwealth Games later this month.

Ahead of the Opening Ceremony, Breaking Travel News reporter Alice McKeown visits the city to check out some of the highlights visitors can expect.

Glasgow is a city regenerating at a remarkable pace.

Once known for its slums and industrial dereliction, it has been transformed into a vibrant destination over the past decade.

As recognition of this success, Glasgow will hold the Commonwealth Games in a few weeks, with the Opening Ceremony set to take place at Celtic Park on July 23rd.

Visitors to Glasgow have plenty of experiences to feast upon; it’s a lively and bustling city which offers something for all.

Even the most hardened of shoppers will be reduced to hobbling home after indulging in ‘Style Mile’ – a stretch of shops which counts as the UK’s largest shopping area after London’s West End.

There is varied and lively nightlife; clubs and live music venues are nestled in against the backdrop of traditional Victorian architecture, and top-notch restaurants are packed out with diners throughout the evening.

The city’s maritime heritage is a significant part of Glasgow’s identity; shipbuilding was the main industry along the River Clyde for 150 years, though this began a natural decline after WWII.

Now, 20 kilometers of the Clyde Waterfront is being completely regenerated, at a total cost of £5-6 billion.

Tourists can go down and check out transformation for themselves and enjoy the riverside walks, or compare old to new in the Riverside Museum.

So where to stay in Glasgow?

If you’re after luxury, look no further than Blythswood Square Hotel.

Situated in Glasgow city centre, the Blythswood is an award-winning five star spa hotel, set within a gorgeous Georgian terrace.

You can stay there from £130 per person per night, which includes a hearty Scottish breakfast. 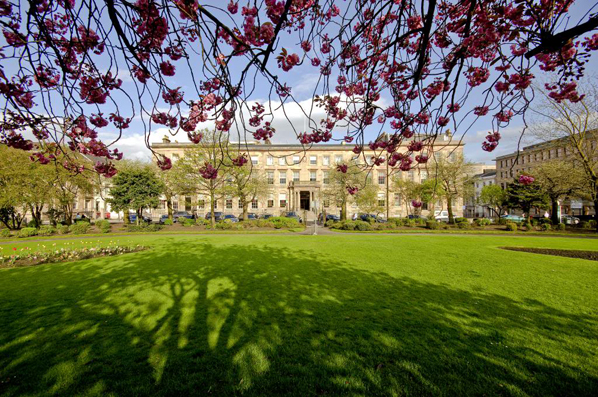 The Blythswood lets you step off the hectic streets of the city into a blissful sanctuary of calm and luxury.

The rooms all have magnificent en-suite bathrooms as standard, with fantastically large baths and a separate waterfall shower.

The spa in the Blythswood is what sets it apart.

Set across an area of 10,000 square feet and with nine luxury treatment rooms, a thermal suite, and a range of rejuvenating treatments, you can immerse yourself in a blissfully relaxed state for hours. 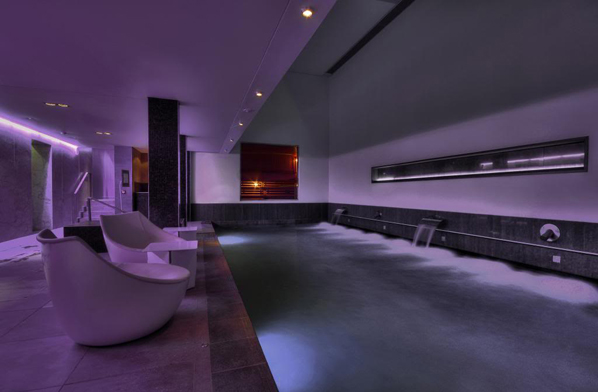 Guests can enjoy the ‘thermal experiences’, which are a series of rooms designed to take your body on a ‘wet and dry, warm and cold temperature journey’.

I particularly enjoyed the hydro pool and vitality pool – both designed to relax muscles by gently massaging them with hydrotherapy body jets.

If you get too hot at any time, you can take yourself over to the ice fountain; it spits out newly-formed ice flakes every few seconds for you to rub over your body! 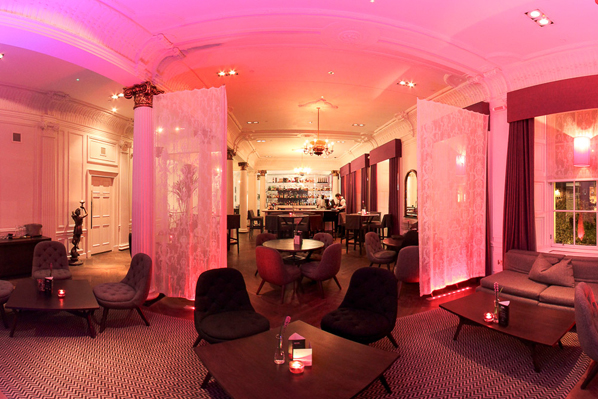 The Blythswood entertains as well as it relaxes; there is live music every Sunday afternoon, via the homegrown six-piece Glasgow band Bronagh & the Boys – a great way to finish your weekend!

The second hotel I stayed at was the Radisson Blu – located in the heart of the city, very close to Glasgow Central Station.

Given its fantastic proximity to transport options, it’s a natural choice for those looking to take a few strides from the station and into their hotel room. 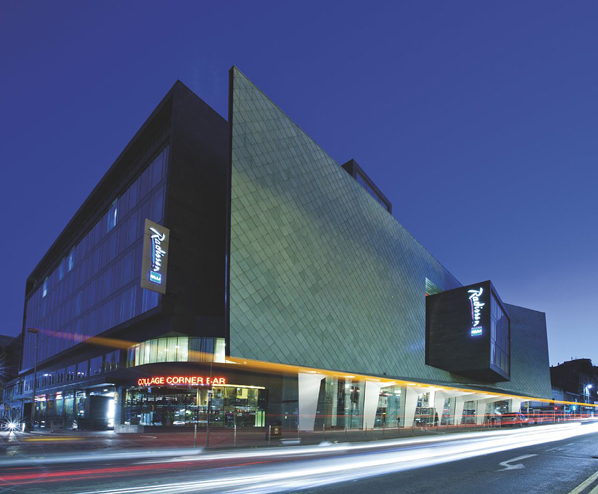 One thing which is immediately striking about the Radisson Blu is the architecture.

Designed by Murray and Dunlop, the severe jutting lines seems at odds with much of Glasgow’s more traditional designs.

When you step into the hotel lobby and crane your head upwards, you’re met with elegant modern design and a huge expanse of open space.

You get the feeling they could almost fit another hotel in the lobby alone! 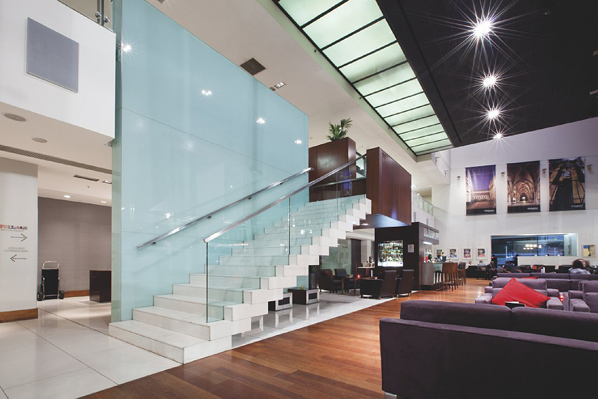 The Radisson has 250 rooms and suites available, all with free high speed internet and a large flat screen TV.

The standard rooms are minimalist in design, but provide everything you’d want for a good night’s stay in Glasgow.

You can wander down to the hotel pool and fitness centre, which includes access to LA Fitness, as well as a pool and sauna.

What the Radisson excels at is breakfast.

It’s got a fantastic hot and cold buffet selection, and the best thing about buffets like this is that you can control the portions and mix-and-match approach.

Being able to dip in and out of different foods at your leisure, while lazily flicking through the Sunday papers is what hotel breakfasts are all about.

Though for those guests who don’t agree, the Radisson offers a ‘grab and run’ breakfast service, with take-away tea/coffee and cereal bars!

Rates at the Radisson Blu start at £151 for standard rooms including breakfast.

If you’re passing by Glasgow University, I’d highly recommend Stravaigin, a gem of a restaurant nestled in Gibson Street.

With multiple awards under their belt, they mix Scottish fare with a global influence, and you can dine on their creative and well thought - out dishes for less than £35 each, including wine.

You’d be wise to book, as tables go quickly!

The weekend saw me only dipping my toe into Glasgow’s offerings. It will be the first trip of many, I hope!