For a relatively small city of just over half a million people, Edinburgh certainly punches above its weight when it comes to tourism.

The Scottish capital welcomed 2.1 million overseas guests in 2018, according to figures from VisitScotland, with three quarters citing leisure as the main reason for their trip.

Between them they spent well over £1 billion.

As well as a number of key attractions - such as Edinburgh Castle, Edinburgh Zoo (home to two Giant Pandas on loan from China) and the world-famous Fringe Festival - growth in airlift has been instrumental to this success.

Emirates launched a vital connection to its hub in Dubai in October last year, while Delta Air Lines also recently took-off for Boston.

These routes join those to New York, Beijing, Doha and elsewhere to make it increasingly easy to visit the city from around.

In some respects, the accommodation sector has failed to keep pace.

Sheraton and Rocco Forte occupy plum spots at the higher end, where they will soon be joined by Red Carnation, W Hotels and Virgin Hotels.

But in general, the market tends toward reasonably priced mid-sector properties, with a dearth of luxury alternatives. 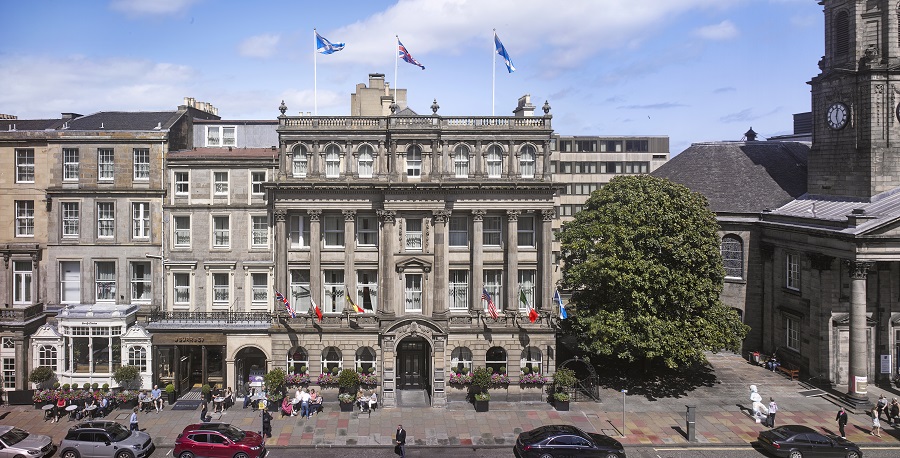 At the centre of it all is the InterContinental Edinburgh – the George.

As Andreas Maszczyk, general manager of the hotel, tells Breaking Travel News over coffee, it is an exciting time for the city.

He explains: “Edinburgh is a great destination, one I have known for 16 years, on and off.

“It is the second quickest growing destination in the UK, behind London, and I believe there is a strong demand for luxury travel in the city.

“There are a lot of hotels in the three-star and lower four-star categories, as well as apartments and Airbnb.

“But the airport now has connections to over 100 destinations around the world – direct flights to North America, the Middle East and China.

“This brings a new type of traveller and there are not many luxury hotels to accommodate them.”

As head of the property since 2015, Maszczyk’s personal history is intimately interwoven with that of the hotel.

Having begun his career with InterContinental in Germany – “cleaning shoes, delivering newspapers” – in 1999, he climbed the ladder with the company.

During stints as night manager, front of house leader, duty manager and guest relations manager, he originally spent time with InterContinental in Edinburgh in 2003 before departing to study at Cornell University in the United States.

Returning to the UK, he was appointed head of revenue management for Principal Hotels, overseeing 12 properties.

“However, my dream was always to be the general manager of a property – and the opportunity to do this came up, first with the Principal St David’s in Cardiff, my first leadership role, and then here in Edinburgh,” he explains. 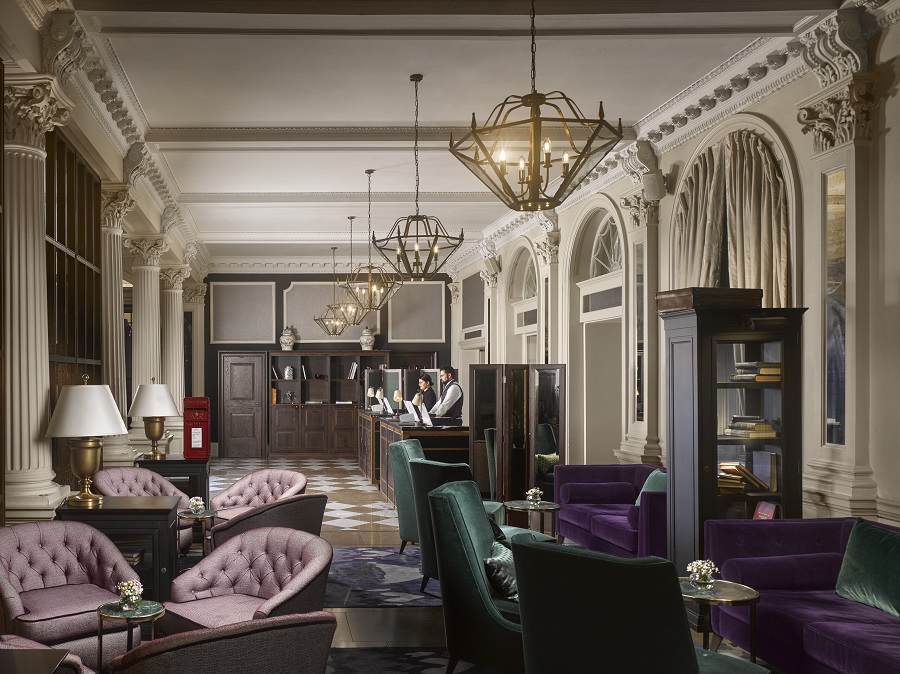 With the InterContinental flag once again flying overhead, the hotel is currently undergoing the latest in a series of renovations.

The property is composed of a collection of five Georgian townhouses, originally built in the 1780s for the city’s elite.

In its heyday, they would have been among the most exclusive addresses in Edinburgh, serving as artist’s studios and entertaining the writers, poets and thinkers of the Enlightenment.

The task today is to tie all these disparate elements together.

“We have now launched the latest work, to take the hotel back up to InterContinental standards,” explains Maszczyk.

“Some of the rooms have been refurbished already, 79 in total.

“This means new marble bathrooms and cushions, as well as an upgrade to the beds and air conditioning, which is very important as the clients we attract begins to change.

“We are working with the designers to tie it all together – but it has been a long planning process.

“We have had to rework every single room, looking at what chairs and elements of design we can bring into each one.

“But we have been keen to maintain the heritage of the hotel, which is our unique selling point – we are very proud of our past.

“The work will be completed by Christmas, in time for the New Year celebrations.”

He adds: “The hotel has been established in Edinburgh for a long time and we have very good relationships with the authorities.

“It was listed as Grade II in 1975, but we have not encountered any problems during the renovations - with the design team at InterContinental and M Studios in London, we have been working very hard.” 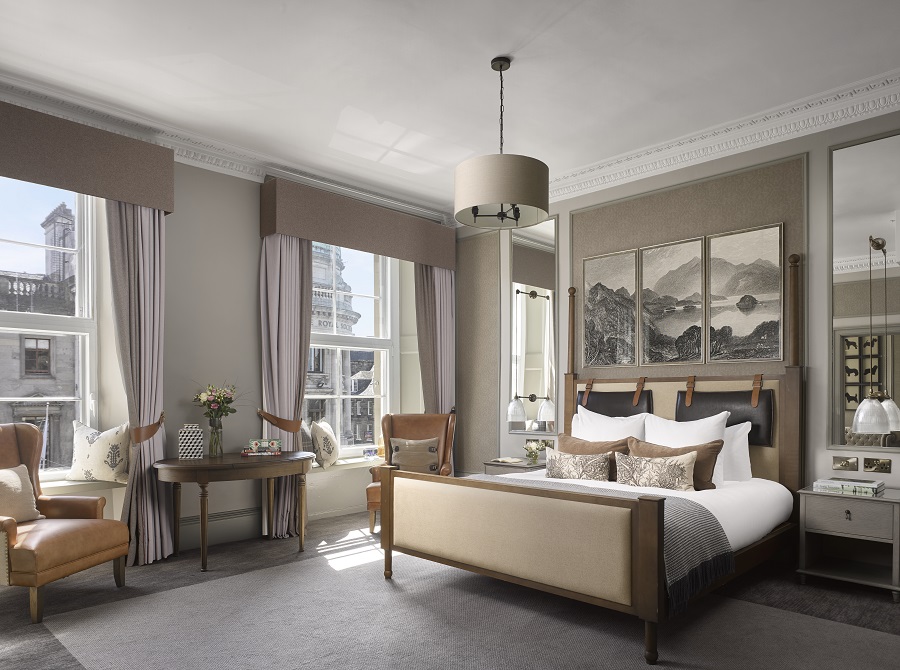 What is emerging is a leisure-focused property, ideally suited to visitors from the United States.

InterContinental Edinburgh – the George fairly reeks of history and tradition, from the imposing stone entrance, through to the sepia images that dot the walls, antique maps and kilted staff.

The property has been welcoming guests since it first became a hotel in 1881, hosting the likes of Scottish poet Robert Burns and novelist Sir Walter Scott, while it was also once home to Susan Ferrier, known as “the Scottish Jane Austen”.

These austere patrons are remembered throughout the hotel.

“We are seeking to create stories for our guests; they want to go back and tell their friends what they have experienced, and the historical element of the property is a very important part of that.

“For example, a gentleman named John Oliphant lived here in 1834 when he created one of the first printing presses in Scotland.

“In order to honour him, we called our restaurant the Printing Press – in this way we keep the history alive,” explains Maszczyk.

He continues: “We have also created our own gin – No.25 – with the name taken from the house number of the original property.

“We worked with a repeat guest, who told me he was opening a distillery in Dunfermline, to create this unique product for our guests – something you cannot get anywhere else.

“There were a lot of tastings – the fun part – and it has been a real success.

“There will be a launch party, with a second gin to be revealed later this month – but you will have to wait and see on that!” 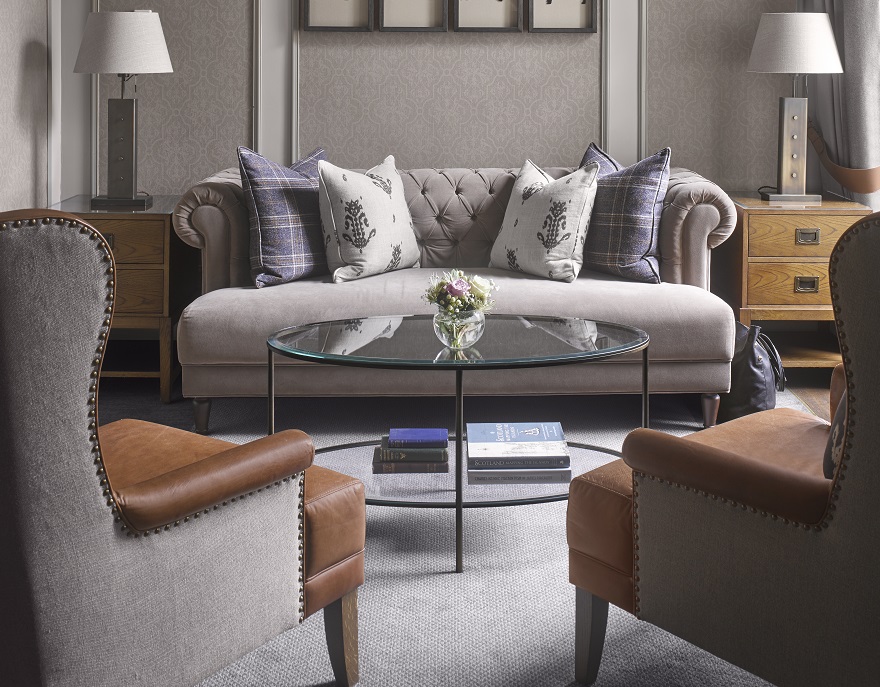 As it reinvents itself, the hotel has seen the composition of its source markers change.

“We had largely been drawing clients from the UK, but with the InterContinental brand behind us, it opens so many doors,” says Maszczyk.

“Before, the UK domestic market accounted for around 60 per cent, with smaller groups coming from Europe, North America and, to a much smaller extent, the Middle East.

“Moving forward, we will see growth from North America and the Middle East, while there is certainly potential for growth from China.

“Mainly, though, we are excited about North America.”

He continues: “Overall the hotel is a leisure destination all-year round – around 70 per cent of our guests are leisure travellers, even during the week.

“As we know, Edinburgh is now open to leisure guests throughout the year.

“Formally it was open from April-October, for sightseeing, the attractions.

“But now we have the Six Nations rugby in February, a growing Christmas Market, as well as, of course, the record breaking four million guests who went to the Fringe Festival this year.

“Apart from the first two weeks in January, we are very happy!” 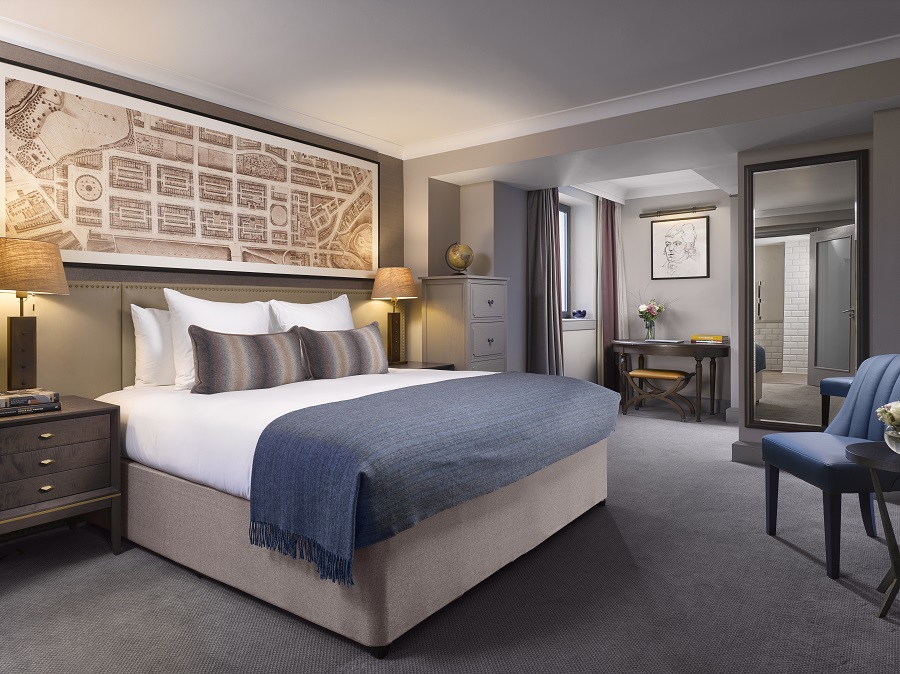 Looking ahead there are plans to launch a new whisky for the InterContinental Edinburgh – the George, as well to develop the Forth View Suite into an informal executive lounge.

With the paint barely dry on the hotel’s latest incarnation, Maszczyk is already turning his attention to the next.

The InterContinental brand has brought a touch of glamourous modernity to this iconic hotel, with the intention of inspiring today’s travellers.

The recent refurbishment combines luxurious natural materials such as oak, marble and leather with a palette of colours inspired by the great 19th-century Scottish landscape painters.