BTN: What has it been doing to gain such recognition from the travel and tourism industry?
SSBT: This was very much a reflection of superb efforts by the entire tourism sector in upgrading the destination’s product offering, its accommodation inventory and first-class travel links. From the tourism authority’s side, we have introduced a hotel and hotel apartments classification system which has led to a number of accommodation upgrades and which brings added integrity to the destination.

The authority has also stepped up its training of tourist guides, introduced a whole host of new events for the destination, such as the highly successful Gourmet Abu Dhabi festival and expanded its marketing outreach with the opening of overseas offices in Italy and the opening of new visitor centres with additional facilities now being planned for Al Jahili Fort in Al Ain and Abu Dhabi International Airport.

Much of the acclaim though also belongs to the private sector which is consistently expanding with new golf courses in Abu Dhabi and Al Ain, new hotels, an increase in the number of cruise stop-overs, new destinations launched by Etihad, new attractions, such as the Ferrari World planned for Yas Island, and the arrival of new carriers into Abu Dhabi International Airport – Ukraine International Airlines, for instance, commenced a twice-weekly flight to the UAE capital in September.

Together with the wider industry we have built considerable momentum and we intend to keep this going. 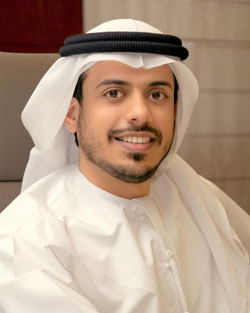 BTN: How are the cultural projects progressing, in particular the Louvre Abu Dhabi museum and the Guggenheim?
SSBT: Again we are making significant progress. Foundation work commenced recently on the Louvre Abu Dhabi and all design and engineering work for the other assets on the Cultural District of Saadiyat Island is progressing according to plan.

BTN: In what way do you think it will create a blueprint for the modern Arabia?
SSBT: The Cultural District will be a hub for cross-cultural knowledge transfer building greater understanding of our own indigenous culture, particularly through the planned Sheikh Zayed National Museum, but also the understanding in this part of the world of the many cultures the region now engages with. The Cultural District in many ways is a visual manifestation of the emergence of a new dialogue of civilisations.

BTN: How is the global downturn influencing your planning?
SSBT: The global financial crisis is having an obvious impact on international tourism however, the impact and its severity differs from destination to destination.

Our first step has been to review the nature of the downturn and Abu Dhabi’s relative strengths as a destination. Our initial conclusion is that we are still well placed to ride out some of the worst effects.

We have reached this conclusion because of our visitor base, which is largely from within the region, the fact that our international visitor profile is largely dominated by the business tourism sector, Abu Dhabi’s emerging status as a global aviation hub with an expanding Etihad network, the emirate’s strong economic fundamentals. We are fortunate in having access to the 30 million plus consumers in the GCC who have a tendency to travel locally in times of uncertainty gives and we have solid government’s support and resource commitment to the development of a strong tourism sector.

We are also expanding our geographic outreach so that we are not at risk from any single market – hence the recent opening of offices in Australia, China and Italy which could be growth areas for us.

We have no intention of taking our eyes off the longer term vision and commitment to the realisation of major development projects such as Saadiyat Island is unwavering. That being said we realise that Abu Dhabi’s tourism is not immune from the impact, it is just well inoculated.

To date, most of our demand has been business-based tourism – both from the MICE segment and from people visiting to conduct business here. Leisure tourism is an emerging sector and we are specifically working on a longer term 50/50 split of business and leisure visitors.

Importantly, as the UAE’s and Abu Dhabi’s economy widens, business tourism will continue – it is proven to be the most resilient segment of the wider visitor panorama. Our main markets are the Middle East, UK and Germany with other European, Asian and the Australian market also expanding as destination awareness grows. ADTA currently operates overseas offices in the UK, Germany, France, Australia, China and Italy and others are under feasibility study.

Access to the destination is also improving as Etihad continues to expand its route network.

Given the healthy prognosis for business tourism, we believe the demand will continue. Abu Dhabi does not intend to become a mass market leisure dominant destination. We will continue to develop at the premium end of the spectrum in a sustainable and culturally appropriate manner. Our hotels are currently running at occupancy around 80% and hoteliers remain bullish about prospects for 2010.

The public and private sector is creating a more expansive product range of visitor attractions, the latest of which is the ADACH initiative of the renovation of Al Jahili Fort in Al Ain and the creation of the highly educational and informative visitor centre there.