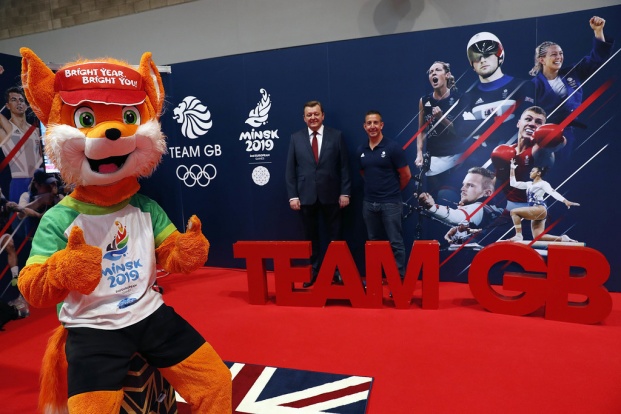 Team GB has unveiled its new kit ahead of the European Games.

Posing with mascot, Lesik the Fox, karate athletes Amy Connell and Joe Kellaway from the team unveiled the new kit in Birmingham.

They were joined by Sergei Aleinik, ambassador of Belarus to the UK, ahead of the event in Minsk later this month.

The multi-sport and event will feature 4,000 athletes from 51 countries.

Eight out of 15 different sports are part of the Road to Tokyo 2020 qualification: archery, athletics, badminton, cycling, judo, karate, shooting and table tennis.

As the start of the Second European Games fast approaches, so Belarus is gearing up to welcome thousands of athletes and spectators from around the world

The republic of Belarus has so much more to offer visitors to this beautiful land than just world-class sporting events.

A land of rivers and lakes, ancient castles and palaces, it is located at the heart of Europe.

It gained independence in 1991 and was one of the founding members of the United Nations in 1945.

The country’s numerous national parks are a huge source of pride for the Belarusian people.

With 3,600 sporting facilities, Minsk has plenty to offer sports fans.

In 2014 the city hosted the IIHF World Championship, and in 2016, the European Speed Skating Championships took place in the Minsk-Arena.

Earlier this year in 2019, figure skaters came to the capital of Belarus for the European Figure Skating Championships.

Now the Second European Games will set to attract thousands more visitors to Minsk’s twelve dedicated venues for the duration of the games.