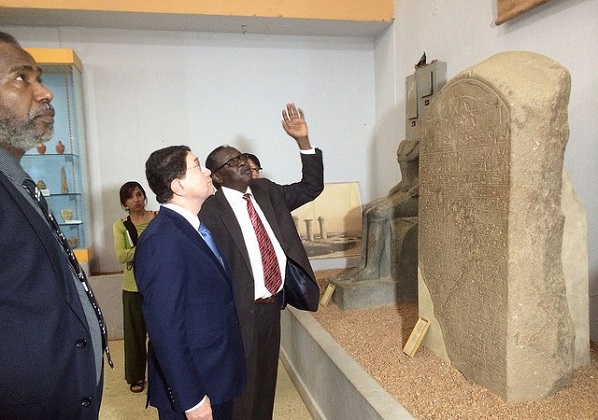 UNWTO secretary general, Taleb Rifai, has expressed the commitment of the World Tourism Organisation to support Sudan’s tourism development during his recent official visit to Sudan.

The visit coincided with a three-day regional executive training on crisis communication in tourism organised by UNWTO and the UNWTO Themis Foundation.

Meeting with the president of the Republic of Sudan, Omar Hassan Ahmad al-Bashir, to present the ‘Open Letter on Travel and Tourism’, a campaign promoted jointly by UNWTO and the World Travel and Tourism Council to raise awareness of the value of tourism to development, Rifai reiterated the potential of the tourism sector in creating new opportunities for the people of Sudan.

The president expressed Sudan’s appreciation for the support of UNWTO by presenting UNWTO secretary general with the Order of the Two Niles Grand Cross.

The official visit also included meetings with the press to address the issues of perception in Africa and a visit to Port Sudan and to the recently nominated World Heritage site of the Sanganeb Island.

There Rifai emphasised the need to build and have the right infrastructure in place and be able to communicate effective and positive messages to the world about Sudan.

Perception issues and the generalization of the impact of crises in specific locations to the whole region are some of the main obstacles facing tourism development in Africa.

To address this, UNWTO and the UNWTO Themis Foundation have organised a three days training on crisis communication in Sudan.

Crisis communication preparedness is key to build resilience in Africa as it allows destinations to minimise the impact of crisis situations on the tourism sector and thus on its socio-economic benefits.