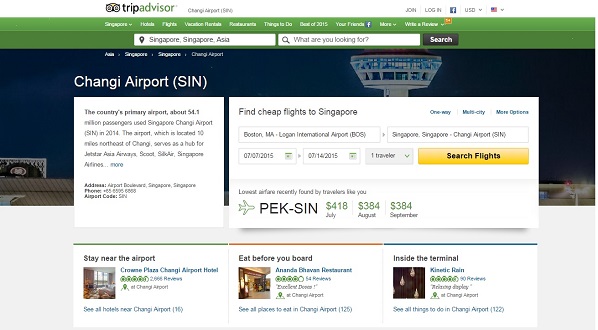 When travellers search for an airport on TripAdvisor, they will be directed to a dedicated airport page with reviews, ratings and other information about hotels nearby as well as restaurants and attractions in both public and transit areas.

Amenities including duty free stores, boutiques and airport lounges will also be listed on the page.

“Over 3.1 billion travellers pass through airports each year with the average traveller spending 150 minutes of airport dwell time from arriving at the terminal to the doors of the plane closing at the gate,” said Adam Medros, senior vice president, global product, TripAdvisor.

“We want to help them quickly find things to do on the site while they’re waiting to catch a flight, or book an airport hotel when they need a place to stay.

“With the launch of airport pages, not only will travellers have access to airport information at their fingertips, but businesses will also be able to market themselves directly to travellers worldwide searching on TripAdvisor,” continued Medros.

Changi Airport is the first airport in the world with hundreds of its amenities listed on TripAdvisor.

Other major airports including John F. Kennedy International Airport and London Heathrow Airport will be launched by July 2015.

“As the world’s most awarded airport, Changi has won many fans across the globe and we are proud to be the first airport on TripAdvisor to feature our amenities and encourage travellers to visit and review them,” said Ivan Tan, senior vice president for corporate and marketing communications at Changi Airport Group.

“We believe providing useful information on what is available at the airport will help travellers make the most of their time here.”

TripAdvisor airport pages will be available on all 45 TripAdvisor sites and in 28 languages globally and on the TripAdvisor mobile app.