Organisers at Expo Milano 2015 have announced that Giorgio Armani will celebrate the city of Milan with a large event on April 30th next year.

The celebrations will mark the 40th anniversary of his company being in business and kick off proceedings for the Milano Expo 2015.

In a brief statement organisers said “Expo Milano 2015 thanks Giorgio Armani, an icon of Made in Italy and globally renowned for his style, for accepting to become ‘Special Ambassador’ of International Registered Exhibition and to represent Italian fashion for the inauguration evening of the exhibition.”

More details of the event are expected to be released in the coming months at preparations are completed. 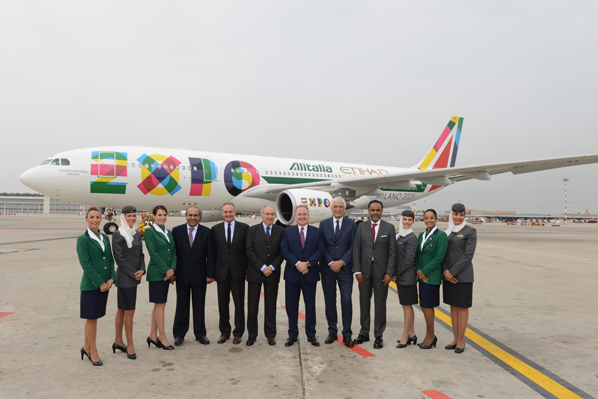 The news follows a recent unveiling from Alitalia and Etihad Airways, the national airline of the United Arab Emirates, of two aircraft in a unique Expo Milano 2015 livery to mark their co-sponsorship of the global event.

Expo 2015 will be held in Milan from May 1st 2015 to October 31st 2015 with an estimated 20 million visitors expected to attend the event of which more than a third will travel to the northern Italian city by air.

The airlines held joint simultaneous events at Malpensa Airport in Milan and Abu Dhabi Airport to unveil the two Airbus A330-200 aircraft, to audiences gathered in both locations as well as thousands watching online around the world.

Etihad president James Hogan said: “I am delighted to launch the Expo 2015 collaboration with Alitalia in Milan and in Abu Dhabi. From today, these two aircraft, in this eye-catching livery, will spread the important global message of Expo 2015 to people on six continents.

“The co-sponsorship of Expo 2015 is evidence of the growing partnership between Alitalia and Etihad Airways and will play in a key role in bringing the targeted eight million visitors from around the world to Milan.

“I believe Expo 2015 will once again demonstrate the power of travel and tourism to drive growth and stimulate job creation and economic development in Italy.”

Flight frequencies to and from Milan are set to increase during Expo 2015 when Alitalia will commence daily flights between Milan Malpensa and Abu Dhabi.

These flights will connect with Etihad Airways’ services throughout the Middle East and with markets in the Indian sub-continent, Southeast Asia, and Africa.
Alitalia and Etihad Airways will link Milan with 560 unique online and codeshare destinations across the globe.