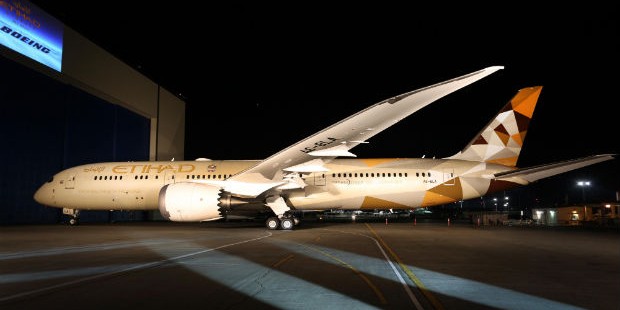 Boeing has rolled out of its paint hangar the first 787-9 Dreamliner that will be delivered to Etihad Airways.

The airplane is painted in the airline’s new ‘Facets of Abu Dhabi’ livery with colours reminiscent of the desert landscape, inspired by the culture, Islamic design and architecture motifs of the United Arab Emirates.

“The US is a strategically important part of our network,” said James Hogan, president of Etihad Airways.

“As we celebrate the rollout of our first 787 today, we remain focused on bringing Etihad Airways’ world-class hospitality and unparalleled product experience to provide more choice to Americans travelling with us worldwide.

“We are also very proud to support vital US businesses including Boeing as one of the largest airline customers for the Dreamliner, an aircraft that will play a fundamental role in the future of our growing international network.”

Etihad Airways - considered the World’s Leading Airline by the World Travel Awards - will take delivery of its first 787-9 later this year.

“Etihad Airways is one of the most forward-thinking airlines of the world and we’re proud to have their trust and confidence in the Dreamliner,” said Boeing Commercial Airplanes president Ray Conner.

“The airline’s new livery is a unique design that reflects the UAE’s rich heritage of innovation and great hospitality.”

The 787 will be a key part of Etihad Airways’ fleet and network expansion plans.

The airline has announced that the 787-9 will be introduced on six of the airline’s routes: Dusseldorf, Germany; Doha, Qatar; Washington, DC, USA; Mumbai, India; Brisbane, Australia; and Moscow, Russia.

The new 787-9 complements and extends the super-efficient 787 family.

With the fuselage stretched by 20 feet over the 787-8, the 787-9 can fly more passengers and more cargo farther with the same exceptional environmental performance – 20 per cent less fuel use and 20 per cent fewer emissions than the airplanes it replaces.