The international ballroom dancing championship event, which is open to the rest of the world, is in its second leg of Asian Open Dance for the 2009 Tour and will be held on Friday 27th and Saturday 28th February at the Arena of Star at the award winning Genting Highlands.

It is the fifth consecutive year that the event has been held in Malaysia and promises to be the greatest world class event for enthusiastic dance fans.

The prestigious event designed for amateurs and professionals is recognized by the Asian Dance Council (ADC) and the Malaysian Dancers’ Association (MDA), a member of the World Dance Council (WDC).

The events opening ceremony was witnessed by Mr Kevin Tann, the current acting Vice-President of Promotions and Entertainment Division from the Resorts World Berhad.

Mr Alex Lim, Organizing Chairman of the Championship said, “Our philosophy in organizing this Championship is to bring the best dancers from around the world to our shores and showcase their dance skills to the Malaysian public and to generate interest and ignite passion in dancesport,” 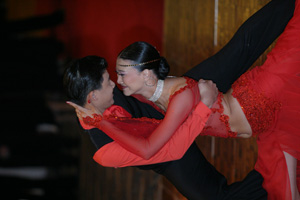 He went on to say how dance sport is a healthy activity that can encourage family bonding and bridge the generation gap as it is an activity suitable for family members of all ages. Apart from that, dancing can also instill self-discipline, respect and enhance posture.

The event is expected to attract over 600 contestants from 20 different countries including from the Australasia, European, and Asian regions.

The Friday will concentrate on Ballroom and Latin with the consecutive day consisting of a more modern approach with the inclusion of Hip Hop, Belly Dancing and Line Dancing.

There is an attractive $100,000 top prize for the Championship in the professional and amateur categories.

A public listed company has sponsored the dance floor for the Championship whilst Desa Food Product Sdn Bhd is the official snack sponsor.