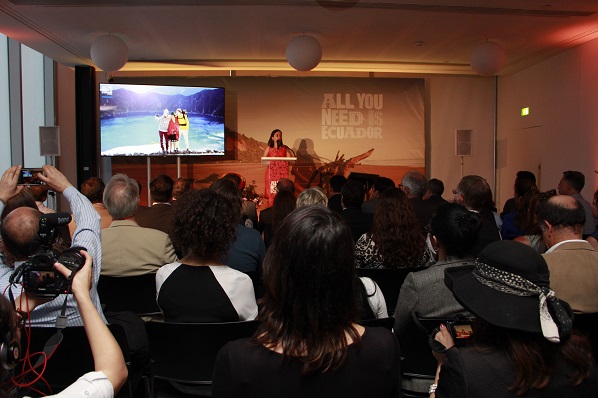 The ministry of tourism of Ecuador has hosted the global launch of the second stage of its ‘All You Need Is Ecuador’ campaign.

The event took place at London’s emblematic Tate Modern, with the presence of minister of tourism Sandra Naranjo and other government representatives from the country, as well as guests from the UK tourism industry, media, and Ecuadorian private sector.

Minister Sandra Naranjo and vice minister Dominic Hamilton were in London to participate in the Experience Latin America travel fair.

In the days leading up to the event, they met with key tour operators, airlines, hotel groups and media, in order to promote development opportunities in the country’s tourism sector.

“The first stage of the campaign was primarily about raising awareness.

“The second stage invites travellers to experience our country on a more personal level, as a place where they can reconnect with nature and themselves,” the minister explained.

Tourism: A high-growth sector in a diversifying economy

The All You Need is Ecuador campaign is part of an ambitious government strategy to diversify the Ecuadorian economy and place tourism at the heart of a long-term plan to transition away from oil-based dominance.

This is compared to six per cent growth for Latin America and five per cent globally, in the same period. Likewise, revenue generated in the tourism sector grew 19 per cent last year, contributing $1.5 billion to the country’s economy, equivalent to five per cent of GDP, making it Ecuador’s third largest industry.

This year, growth is forecast to continue as the ministry focuses on strengthening traveller services, collaborating with the private sector along the supply chain, expanding nationwide certification schemes founded on sustainability principles, training schemes and product development.

Combined, the aim is for Ecuador to become known not only for its beauty, but also as a leader in quality services.