Air Astana’s introduction of three-times weekly direct services from London Heathrow to Astana has provided a brand new link between the capital cities of the UK and Kazakhstan, significantly strengthening the relationship between the two countries.

These first direct links from London - to a capital city growing in political and economic importance, and recognised by UK prime minister David Cameron on his visit to Kazakhstan at the end of last year - reflects a shift of prominence, as Kazakhstan’s flag carrier marked its 12th anniversary in May this year.

The importance of Astana will be further enhanced when the city plays host to Expo 2017, under the theme ‘Future Energy’.

The London-Astana flights now continue on to Almaty, a route the airline was hitherto flying twice weekly, since 2003.

Air Astana introduced one weekly service from London direct to Astana at the end of 2013.

The new schedules also enable passengers to connect on to Air Astana’s expanding network of services to destinations in Central Asia, the Caucasus, southern Russia and western China. 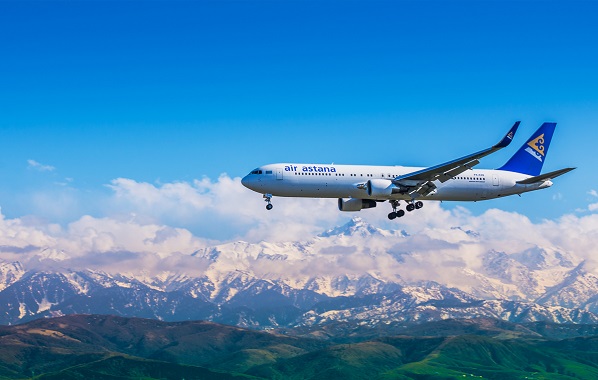 Now the carrier is planning to widen its European network with the addition of regular flights to Paris from autumn 2014 and to Prague in spring 2015, complementing established European routes from Frankfurt to Astana (daily) and Atyrau to Amsterdam, six times per week.

New summer charter routes will also commence from this month – to Rhodes from Astana and from Heraklion and Barcelona to Almaty.

Route expansion has become possible following the lifting (this April) of restrictions previously imposed by the European Union owing to the failure of the Civil Aviation authorities in Kazakhstan to pass the ICAO safety audit.

The EU’s Air Safety Committee had always accepted that Air Astana’s safety standards were fully compliant with the highest international standards, but had nonetheless imposed a limit on Air Astana’s ability to increase its frequency of services to the EU as part of the sanction imposed on Kazakhstan in 2009.

However, with effect from February this year, Air Astana was released from those restrictions.

“We are setting about this expansion in a very careful way,” stressed Peter Foster, president, Air Astana, speaking in London.

“While we are delighted to be able to expand our operations into Europe now, we could not plan for the expansion beforehand because we didn’t have advance knowledge these restrictions would be lifted.

“The re-alignment of flights away from Almaty to Astana is an important first step,” he added.