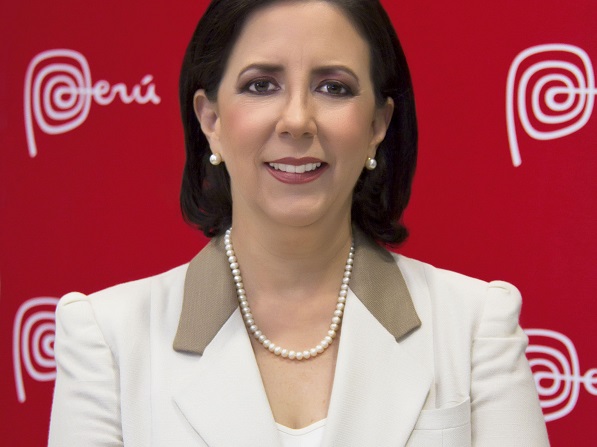 María del Carmen de Zamora Reparaz, who has held the position of deputy minister of tourism at the Ministry of Foreign Trade & Tourism in Peru since 2014, was on Friday recognised with the title of South America’s Leading Travel Personality by the World Travel Awards.

María del Carmen de Zamora Reparaz has over 20 years of experience in the tourism sector, working since 2003 in various positions in the Commission for the Promotion of Peru Export and Tourism (PromPerú).

As deputy director of receptive tourism from 2007-2011, she was responsible for the positioning of Peru under a strategy designed to introduce the country into international trading channels.

Later, as director of tourism at PromPerú (2011-2014), she encouraged and promoted domestic tourism, coordinating strategies with the public and private sector.

She has been responsible for the internationalisation of Peruvian cuisine through “Peru, Mucho Gusto,” a strategy designed for the comprehensive promotion of Peru in Latin American markets.

The strategy has contributed to the boom of Peruvian cuisine as a new travel motivator.

While she was director, PromPerú also launched the successful campaign “Peru, Empire of Hidden Treasures,” which marked a milestone in tourism campaigns.

Under the concept of historical documentary, Peru was showcased as one of the few civilizing cradles of mankind, emphasizing the diversity of tourism destinations, from the pre-Inca cultures to the modern day, while releasing the facilities they have and reflecting the country’s modernity.

In addition, she strengthened strategic alliances to establish long-term partnerships with foreign operators in the main markets through co-promotion campaigns of Peru as a tourist destination.

The method serves to this day as an input for the development of strategies, taking into account the profile of each segment.

As for domestic tourism, she was in charge of the campaign “What are you plans?” which sought to create a culture of journeys through a platform that offers accessible travel ways for all Peruvians, in all regions.

This program received the Ulysses award from the World Tourism Organisation in 2015.

Also, this campaign encourages destination marketing through formal companies that provide security and safety to passengers and diversification of destinations.

In this period, taking into account the new profile of the modern travellers who use technology as the main travel planning tool, the new website peru.travel was launched.

It has since been recognised by voters at the World Travel Awards as the World’s Leading Tourism Authority Website.

As Deputy Minister of Tourism, a post she has held since the 2014, she has been promoting tourism planning strategies, including diversification of tourism products, under a form of consensus and democratic participation among local academics, regional and municipal authorities, entrepreneurs and in the 25 regions of Peru.

Facilitating private investment through various mechanisms, such as the implementation of the Single Window of Tourism, she has sought to streamline administrative procedures in the field of tourism investment.

Also, under the policy of inclusive tourism, she has worked with emphasis on important initiatives such as Rural Community Tourism; “At Turista, lo Nuestro,” which incorporates the tourism chain to producers of localities; and “En mi tierra un product,” seeking direct participation of Peruvian people.

Under her leadership, the tourism policies of Peru have also been invigorated by participation in international organisations.

Thus, Peru hosted major international events such as the XXIII Inter-American Congress of Ministers and High Authorities of Tourism of the OAS with the theme “Rural Community Tourism, Agenda for a competitive and sustainable development” in the 2015, while in 2016 it led the ninth Meeting of Tourism Ministers of APEC with the theme “Connected tourism in the Asia-Pacific through Facilitation of Travel” and the second World Forum Gastronomic Tourism OMT.