This June saw the fifth annual Bali & Beyond Travel Fair take place at the Nusa Dua Convention Centre in the Badung region of the paradise island.

Organised by the Regional Representative Council and Association of Indonesian Tour & Travel Agencies, the event was designed to promote the archipelago’s cultural diversity and open new business opportunities for the participants.

The figures represent a 60 per cent increase in buyers from 2017, while there were also 28 per cent more sellers than last year.

Some 36 international media were also in attendance.

“Our biggest challenge is to build a harmonious synergy between all entities, local authorities and all sectors, thus creating the Indonesia Incorporated concept,” the minister of tourism for Indonesia, Arief Yahya, explained at the opening of the show.

“The weak links have to be addressed and resolved immediately, by considering the Penta-helix model - based on five stakeholders - businesses, public administration, local residents, the knowledge sector and capital.

“The success of Bali & Beyond Travel Fair since its launch represents the Penta-helix synergy that we are working on.

“This further motivated us to fully support the event, with its outstanding track record and proven performance as Indonesia’s leading international travel fair.”

The focus this year was ‘Exploring the colours of Indonesia’.

Speakers addressed opportunities in the market, examined trends and sought to highlight the diversity of Indonesian culture.

Comprised of 17,000 islands, which are home to 714 ethnic groups and approximately 300 languages, tourism authorities were keen to stress there is more to tourism in Indonesia than merely Bali.

“We have chosen the theme of ‘Exploring the colours of Indonesia’ for this year’s event because we believe in Indonesia’s potential and Bali is the perfect place to showcase this.”

Currently, the tourism sector in Indonesia accounts for approximately four per cent of the total economy.

By 2019, the government wants to have doubled this figure to eight per cent, an ambitious target.

The figure implies the country will welcome around 20 million per annum in the coming years, while it currently sees around 17 million.

Last year, however, Indonesia recorded tourism growth of approximately 20 per cent, placing Bali among the top 20 fastest growing destinations in the world. 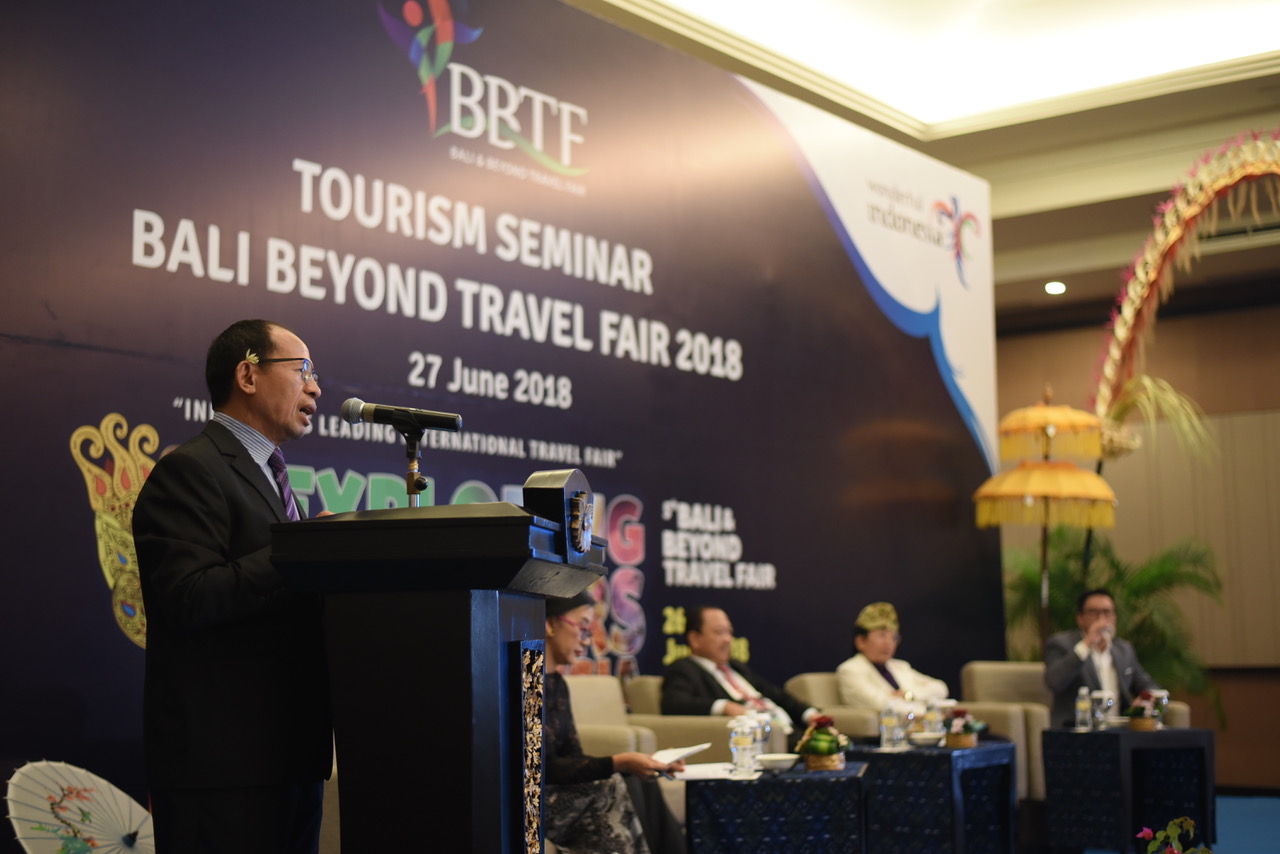 Bali & Beyond Travel Fair is the preminent event in Indonesian tourism

This year there were three main focuses for the hosts: digital tourism, developing the tourist village homestay programme and greater air travel accessibility.

In an effort to keep up with the pace of technological change, Bali & Beyond Travel Fair has partnered with Indomo to develop a cloud-based system for registration and attendance monitoring.

This means all attendees can easily connect as they seek to finalise business transactions.

The data from the 2018 pilot programme will be utilised to improve the experience for guests at future events.

This mirrors plans to develop ID cards for the citizens of Indonesia, enabling them to use government services and facilities such as transport and hospitals, as well as acting as an identity document.

Other planned developments include the full electrification of the Badung regency, efficient bus services, automated traffic control, CCTV, waste sorting and free Wi-Fi across the region.

Turning to the village homestay programme, and Balinese authorities believe in a philosophical approach to tourism.

Termed Tri Hita Karana, it is seen as the main tool to realise the potential of the tourism sector in the region.

It is hoped its wider application will enable a dynamic relationship between tourism and culture, creating harmonious and sustainable development to bring welfare to the community.

The programme was developed as an answer to the growing demand to experience the grassroots lifestyle of Indonesian peoples.

Bali & Beyond Travel Fair strives to use the fair as a platform to showcase the potential of the villages and further drive trade.

Finally, as an island destination, air travel is always high on the agenda.

With the Indonesian visa waiver programme now extended to 169 countries, nearly 50,000 travellers are arriving in Bali every day.

The tourist board is investing heavily in infrastructure to meet growing demand, with Ngurah Rai International Airport currently planning a second runway and an underpass to connect it to the city.

Currently the airport welcomes 21,000 international and 20,000 domestic guests per day, or a total of 15 million per year, with hopes to double the capacity by 2035.

However, nature may have other plans.

During our visit for Bali & Beyond Travel Fair, Mount Agung erupted, grounding 450 flights and stranding 75,000 people.

The first response crews at the scene were offering free transfers to nearby islands, free hotel accommodation and other services, but the event did illustrate the challenges faced. Hundreds of delegates attend the event each year

On the conference floor, there was also discussion of Indonesia as an eco-tourism hotspot.

The country has seen a steady rise in the gastronomy and wine tourism sectors in recent years, with tour operators incorporating winery tours and local cuisine cooking classes into their itineraries.

Concerns do linger, however, that the country is not placing enough emphasis on environmental sustainability.

Deforestation has hit endangered species, while only a minimal fraction of the water used in tourism is treated before being returned to the environment.

At the same time, the government is keen for guests to explore Indonesia, away from Bali.

While using the island as a gateway, the government has identified four new eco-tourism destinations for promotion: Danau Toba (Lake Toba) in north Sumatra, Borobudur Temple in central Java, Mandalika Resort in Lombok, and Labuan Bajo on Flores island.

Some US$300 million has been invested in infrastructure at Mandalika, which now boasts 12,000 hotel rooms and will serve as a docking station for cruise ships.

It is also set be become a special economic zone to promote the growth of local and international businesses.

Critics have, however, pointed to the lack of adequate infrastructure in Indonesian tourism more generally.

Away from Jakarta and Bali, journeys can be hit by poor connections, particularly in the eastern part of the country where there is a shortage of airports, ports, roads and hotels.

The lack of inter- and intra-island connectivity also means that a number of Indonesian regions cannot reach their true tourism potential.

As to who will fill all those hotel rooms? China remains the main target source market, closely followed by India and Japan.

Heavy on-the-ground and online promotion is currently taking place, with the most recent ad (for the four new eco-tourism destinations) being placed on cars and busses in Moscow during the FIFA World Cup.

At the close of the event this year, organisers were keen to highlight the strong balance between new and established exhibitors as well as praising the organic growth of the show.

It will be back bigger and better than ever next year.

Bali & Beyond Travel Fair is a business-to-business event designed to advance the tourism industry in Indonesia through the promotion of best practices, analysis of the latest trends and hosting of informative panel discussions.

Together with exhibitors and buyers from around the world, the event facilitates pre-scheduled appointments for buyers and sellers to negotiate on their long-term corporate travel needs.

Corporations, travel agents, hotels, cruise operators, convention planners, venue operators and travel buyers can leverage the two and half days of sessions to enhance their respective brands in the Indonesian and Asia Pacific markets.