Traveler review sites—led by TripAdvisor—created and drove the growth of the traveler hotel review category, demonstrating the potential role of user-generated reviews in the trip-planning process. The travel industry took notice. Expedia acquired TripAdvisor, Travelocity picked up IgoUgo, Priceline stepped in with MyTravelGuide, and SideStep bought TravelPost (which in turn was acquired by Kayak and recently sold to a startup led by Expedia’s original founders). 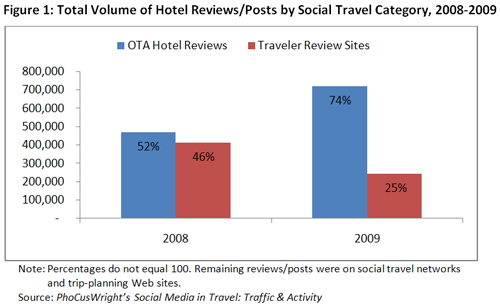 There are several factors behind this shift in where travelers are posting hotel reviews. While category leader TripAdvisor’s review volume and unique visitor traffic both grew considerably in 2009, the OTAs have been aggressively building their portfolios of hotel reviews. They have significantly improved their processes for collecting reviews from customers. Most hotel and package bookers on OTAs receive some kind of trip follow-up communication soliciting their feedback, which feeds the hotel review pipeline.

And they have good reason for doing so: hotel review content appears to play an important role in the online hotel shopping process. Not only do more travelers identify hotel reviews on OTAs as influential in their purchasing decision than other types of online features or content, but OTA shoppers who visit hotel review pages are twice as likely to convert.

PhoCusWright’s Social Media in Travel: Traffic & Activity is a detailed examination of the role of online social media in travel. Conducted in partnership with Circos Brand Karma, Compete and Travelport, the report analyzed nearly 1.9 million traveler reviews, and visitor referral and conversion traffic from more than 50 social travel Web sites, as well as general social networking sites like Facebook and Twitter. Gain knowledge and analysis you need to take advantage of this extraordinary opportunity—purchase the report today (US$995).

Traffic & Activity is the first release in PhoCusWright’s Social Media in Travel series, which will feature a range of reports, articles and spotlights exploring the dynamic relationship between social media and online travel.