The luxury Egyptian resort of The Savoy Hotel Sharm El Sheikh is forging ahead in becoming the leading conference centre for the Red Sea region with a series of high-profile summer events.

As well as playing host to the power players, the resort is bringing top entertainment acts to perform at its newly-opened Show Square. This summer’s events include Liz Mitchell, the original lead singer of Boney M, returning to the Savoy Sharm El Sheik due to popular demand to perform 27 July to 13 August 2009. 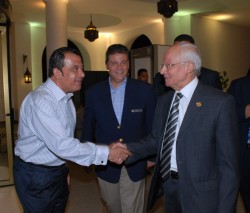 “I am just so thrilled to be coming back,” Liz Mitchell said. “The reception we received at the opening of Soho Square in May was one of the most memorable of my life. I said then I wanted to return and the Savoy Sharm El Sheik has made it possible. I can’t wait to be back in Egypt and topping the bill at Soho Square. It’s a magical place.”

Soho Square is a square mile of upscale restaurants and bars, the centre of Sharm El Sheik’s nightlife, with restaurants offering authentic Middle Eastern dishes.
Eleven bars, including the Old Vic English Pub are located in the Savoy and Soho Square, adjacent to the Savoy. There are two lounges, the Pangea Club/Lounge and the Fashion TV Lounge and the Coffee Shop.

The Savoy Hotel Sharm El Sheikh is one the Red Sea’s premier hotel resorts, with more than 450 rooms and villas and more than a dozen top-class restaurants and bars. It was voted “Africa’s Leading Resort” and “Egypt’s Leading Resort” at the 2009 World Travel Awards Africa Ceremony.