The property is located in the heart of the historic peninsula within walking distance of many attractions, including the Hagia Sophia, the Topkapı Palace, the Blue Mosque, and the Grand Bazaar.

The opening of Royan Hotel Hagia Sophia Istanbul, a member of Radisson Individuals introduces a fifth Radisson Hotel Group brand to Turkey and brings the Group’s portfolio across the country to over 40 hotels in operation and under development.

Royan Hotel Hagia Sophia Istanbul, a member of Radisson Individuals, features 49 standard and superior rooms and suites equipped with a wide range of amenities such as in-room coffee and tea facilities, bathrobes and slippers, and free high-speed Wi-Fi. Guests can enjoy rooms with views onto the gardens or onto the stunning Marmara Sea. The hotel has two restaurants, the Lobby Lounge which serves lunch and dinner in a warm and relaxing atmosphere, and the Rooftop Restaurant which offers breakfast and a sumptuous international culinary experience.

Ramsay Rankoussi, Vice President, Development, Africa & Turkey at Radisson Hotel Group, says: “We are delighted to announce Radisson Hotel Group’s further expansion in Turkey with the signing and opening of our first Radisson Individuals hotel in the country. Our newest brand is aimed at individual hotels with strong service scores and existing hotel identities that wish to remain independent or may be considering over time transitioning to one of the Group’s core brands. The hotel will benefit from Radisson Hotel Group’s global network and capitalize on the Group’s strong presence in the country where we aim to reach over 50 hotels in operation and under development by 2023 but also to further cement our leadership in Istanbul. We thank our partners for their trust and support.” 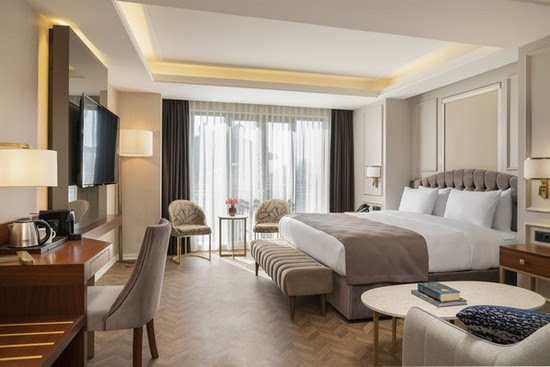 Royan Hotel Hagia Sophia Istanbul, a member of Radisson Individuals is located in the prime area of Sultanahmet where guests can immediately immerse themselves in Istanbul’s rich history, architecture, culture, and art. Minutes from the old historic city center and key historic sights from three empires, including the Topkapı Palace, Hagia Sophia, the Blue Mosque, the Hippodrome, and the Basilica Cistern, Sultanahmet is a top destination offering a wide variety of restaurants, cafes and hotels which can be easily explored on foot or by tram.

Yilmaz Yildirimlar, Area Senior Vice President, Central & Eastern Europe, Russia and Turkey at Radisson Hotel Group, says: “Despite all the challenges, Turkey has witnessed a constant growth and remains one of the most popular countries for tourism. We are proud to welcome the first Radisson Individuals in Turkey which further diversifies our brand offerings across the market but also demonstrates the recognition of Radisson Hotel Group with an already established presence across Istanbul. With Royan Hotel Hagia Sophia Istanbul, a member of Radisson Individuals, our guests will benefit from a new exclusive offering in the center of the old town.”

In response to the need for independent hotel owners to gain further brand exposure and consumer confidence, Radisson Hotel Group launched last year the Radisson Individuals brand - a new conversion brand that offers independent hotels and local, regional chains the opportunity to be part of the global Radisson Hotel Group platform, benefit from the Group’s international awareness and experience, whilst maintaining their own uniqueness and identity.