Qatar Airways’ highly anticipated first A380-800 is one step closer to joining the airline’s fleet, with the unveiling today at ITB Berlin of the new luxury First Class seats that will form part of the aircraft’s tri-class configuration. As a guest of honour the Governing Mayor of Berlin, Klaus Wowereit, was the first to test the product. 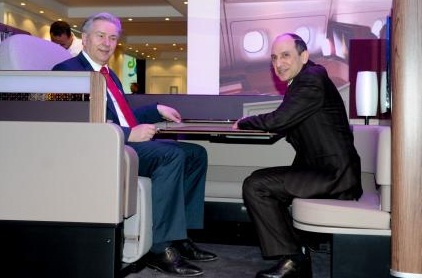 Wowereit, together with other VIPs, joined Qatar Airways CEO, his Excellency Akbar Al Baker, for the official unveiling of the new spacious and high-tech seats on the opening day of the world’s largest travel trade fair being held in the German capital.

All eyes were on the large screen for the unveiling of Qatar Airways’ new First Class Seats for the Airbus A380. His Excellency Akbar Al Baker, presented the new First Class seats with pride, “It is a landmark moment to see this fantastic new First Class A380 seat displayed here at ITB Berlin, the perfect event at which to announce such important innovations to our global audience.”