Staff at the London 2012 Athletes’ Village are bidding for their own Olympic record when the Paralympic Games kicks off.

The 75 Holiday Inn staff running the Village are aiming to clock up a staggering 5,000 miles by the time the curtain draws on London 2012 – the team were fitted with pedometers during the Olympics and recorded an incredible 3,222 miles at an average of 43 miles each.

Holiday Inn, Official Hotel Services Provider to the London 2012 Olympic and Paralympic Games, will host more than 7000 athletes and team officials from 166 teams around the world.  Ann Olsson, who leads the Holiday Inn team, said: “We’re ready for Round Two and we’re aiming for 5,000 miles of top quality service.” 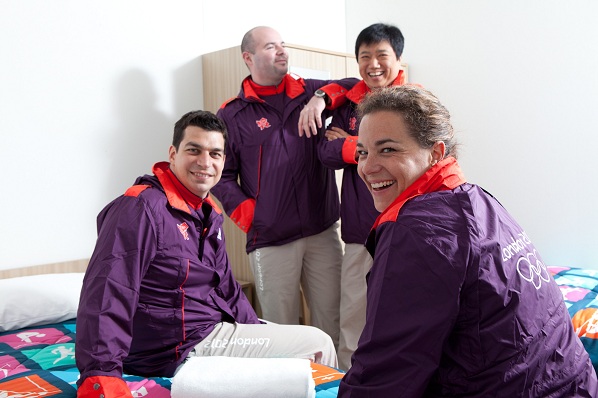 As well as running the Athletes’ Village, Holiday Inn is also helping athletes achieve their goals through its dedicated Athlete Employment Programme which gives budding stars the opportunity to work for Holiday Inn hotels or offices on a flexible basis so they can fit work around their crucial training schedules. 15 athletes have been employed on the programme including Justin Phillips, who is part of the British Paralympic Sitting Volleyball squad competing in the London 2012 Paralympic Games.

Holiday Inn will also accommodate the International Paralympic Committee (IPC) at the Holiday Inn and Staybridge Suites, London Stratford City, plus members of the British Paralympic Association (BPA) along with 350 friends and family of Paralympic athletes, at their Kensington Forum Hotel.

Chris Hale, Holiday Inn Head of London 2012, said: “We’re supporting the London 2012 Paralympic Games on many different levels from our hosting of the Athletes’ Village, the BPA and the IPC to our Athlete Employment programme which has helped Justin prepare for this once in a lifetime opportunity.

“As Jacques Rogge said after the Olympics, London has shown the world the best of British hospitality – we are ready to do it all over again to ensure Britain builds a service legacy we can all be proud of.”