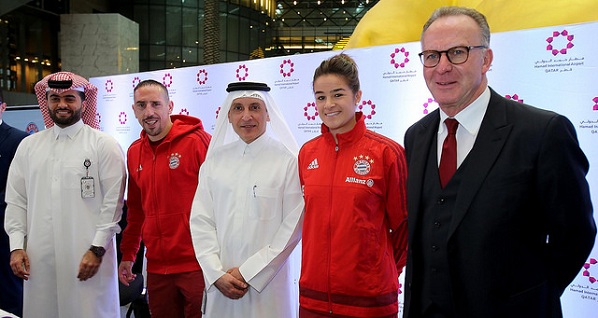 Hamad International Airport-Qatar has announced that it will be the official platinum sponsor of the legendary German football club, FC Bayern Munich.

This airport views the move as another step toward the national vision of establishing global leadership in sports, as Qatar prepares to host FIFA World Cup 2022.

Group chief executive of Hamad International Airport-Qatar, Akbar Al Baker said: “We designed HIA-Qatar to be the most advanced, most efficient and most comfortable global aviation gateway, and a facility able to handle up to 50 million of our own passengers every year, as well as the millions of fans that will visit Doha for the 2022 FIFA World Cup.

“To further align the Group to this national strategy, we took a creative approach by seeking opportunities for HIA-Qatar to partner with the best of the best, and very happily we have created a Platinum Sponsorship relationship with Germany’s most-winning team, FC Bayern Munich.

“We welcome the opportunities this relationship gives HIA.

HIA-Qatar opened in 2014, and remains one of the most technologically advanced airports in the world.