Ramada Worldwide, one of the world’s leading international hotel chains with nearly 900 properties around the globe and a member of the Wyndham Hotel Group family of brands, today announced its continued expansion in the Middle East with the development of two new hotels: the 299-room Ramada® Plaza Kuwait City hotel in Kuwait and the 183-room Ramada Hotel and Suites Amman hotel in Jordan.The brand, which has grown by 80 percent in the Middle East and in North Africa over the past two years, now has nearly 40 properties throughout the region. 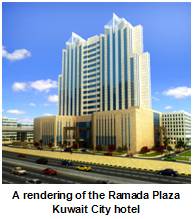 “The World Tourism Organization has predicted that the Middle East will have the highest rate of overall tourism growth in the world over the next several years*,” said Jim Alderman, Wyndham Hotel Group executive vice president of development. “The region has seen significant growth in upscale hotel development but the need for quality, international and midscale lodging brands remains.  As the demand rises, the Ramada chain is well poised to continue its aggressive growth to meet that need.”

Located in Kuwait City and expected to open in October 2009, the five-star, Ramada Plaza Kuwait City hotel is being developed by Kuwait-based Gulf Real Estate Development House and will be managed by Abu Dhabi-based V. Five Continents Hospitality Group.

Located in Jordan’s capital of Amman just outside the city’s financial and business districts and expected to open in May 2009, the Ramada Hotel and Suites Amman property is being developed by Kuwait-based Taameer Real Estate Investment Company and will be managed by Mena Co. for Hotels. It will be the Ramada brand’s first hotel in Jordan.

The Ramada brand also recently opened its first hotels in six new countries, including Latvia, the Cayman Islands and Guam.
——-