The majestic Grand Park Xian is the city’s premier 5-star hotel which has been newly refurbished.  Adjacent to the ancient City Wall in the heart of the city’s business, shopping and entertainment district, the 338-room hotel is renowned for its opulent palatial architecture, luxurious accommodation and authentic ancient-style Chinese cuisine, showcased by its famous ‘Empress Banquet’.

Park Hotel Group’s fast-growing portfolio of hotels covers Singapore, China, Hong Kong and Japan. It intends to expand further in China, looking at ten more hotels in the next three to five years. 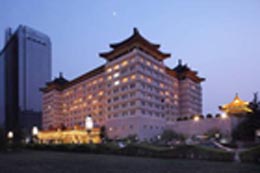 “Despite the downturn, we are taking a long-term perspective of things and intend to continue exploring opportunities for expansion in China and the wider Asia-Pacific region,” said Mr Allen Law, Director of Park Hotel Group.

“Today’s Grand Opening of Grand Park Xian is testimony to our drive to expand our network of strategically-located hotels and enhance our branding,” said Mr Law.

Grand Park Xian is in close proximity to the city’s many historic attractions including the Big Wild Goose Pagoda. It is 35 km from Lintong, home to the famed Terracotta Warriors and the Mausoleum of China’s First Emperor, Qin Shi Huang.

The 10-storey hotel attracts both business and leisure travellers. It boasts the tallest atrium lobby in the city, with facilities in the newly renovated property including Park Palace Chinese Restaurant, Veranda Café, Lobby Lounge, meeting rooms and a refurbished Ballroom.
——-