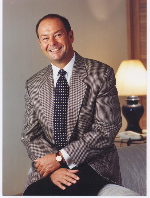 Peter Gibbons has recently been appointed General Manager at the widely successful Savoy in Sharm El Sheikh. Recently nominated for a World Travel Award, The Savoy is a five start property which was originally managed by Le Meridien, and has since been developed and expanded into a 448 room property. BTN caught up with Peter to find out what innovations he plans to bring to The Savoy and to learn about Egyptian hospitality.
BTN: Can you tell me about the location of the hotel along with a basic description of the property? 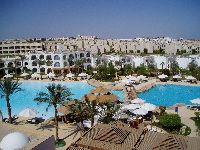 The property is a unique combination of Far Eastern, Arabesque and Colonial African styled architecture which come together to create a stunning resort. Cream coloured curved arches lead guests to the beautiful and panoramic pool side. The palm trees are a luscious vibrant green, all year long, so I am told and the rock formations contrast stunningly with the vivacious blue of the three fresh water pools which lead to 300 meters of white sandy beach.

BTN: I understand that the property was originally owned by Le Meridien. Can you tell me about the development of the property since its takeover?

The property was managed and not owned by Le Meridien, which at the time consisted of 408 rooms. Since then, the resort’s room capacity has increased to 448 rooms. These additional 40 rooms represent a new premier tier called Royal Savoy offering a new lifestyle collection to our brand.

Current developments include an exciting range of themed suites which will be ready in August. In the same month the Sierra is also adding a further 50 rooms followed by a new Spa concept and additional indoor/outdoor pool facilities in October.

We will then be announcing the Babylon casino which will open its doors in November. 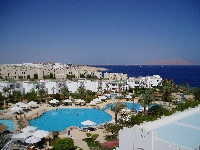 BTN: You have been appointed GM of the Savoy. Was the hotel business part of your career path? Can you tell me about your previous experience?

PG: From the age of 8, I wanted to be a chef and during my teens I worked part time in bars and restaurants This eventually took me to Westminster College in London and thereafter the Dorset Institute of Higher Education. From there I was awarded the Grand Metropolitan Travel Scholarship Award affording me a fantastic apprenticeship in Europe, which ultimately gave me the “travel bug”.
I have now worked on five continents in international properties, most recently the Royal Abjar Hotel in Dubai, Mutiara Beach Resort in Penang, and the Sunway Lagoon Resort Hotel in Kuala Lumpur.

PG: The occupancy rates year to date for 2005 compared to 2004 have increased by 4 % whilst the average rate has increased by 26% for the same period.

BTN: Is there a call to close the property during the summer months when it gets very hot? If no, how do you maintain occupancy levels during this period?

PG: Absolutely not. Sharm El Sheikh is an all year round destination due to its temperate climate; and depending on the type for business, whether leisure, corporate or CEI, I firmly believe that there will soon be no such things as a low period.
BTN: Was there a negative impact of 9/11 for the Savoy, or other hotels in the region?

PG: Following the 11 September events, many hotels in the region witnessed a decline in the occupancy rates. However, Sharm El Sheikh was not really affected. The occupancy rates bounced back after 8 week following 9/11, in fact over that Christmas and New Year period, the Savoy was running full !
BTN: What is your objective for Savoy and how will you try to increase occupancy rates?

PG: My primary goal is to position the Savoy correctly amongst the International five- star brands here in Sharm El Sheikh and to eventually be one of the leading hotels in the region.
We are currently realigning our strategies to ensure that we have sustained demand throughout the year. This will be very much derived from market intelligence and we are starting to work with several well established organisations that can effectively represent us in their respective areas.

BTN: Many of the guests are Brits, Italians and Russians. How do you ensure that you can overcome any language barriers? In which new markets are you looking to promote the Savoy and Sharm as a destination? How accessible is travel to the region?

PG: In addition to our Egyptian colleagues, we are also employing other nationalities who can bring added value to the organisation. They, in turn can transfer their knowledge and expertise which will assist us in our succession planning. As for new markets, I’m currently digesting our existing feeder markets, but already see a great potential for the UK and incentive market in general.
Accessibility is a key factor to any successful destination and with more airlines commencing direct flights, such as Air Arabia from Sharjah, Saudi Airlines from Jeddah and British Airway form Gatwick, I feel certain that with the completion of the new airport extension in 2006, there will be more to follow thus placing Sharm El Sheikh well and truly on the international tourism map. 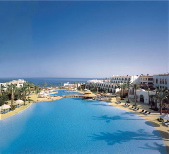 BTN: What is the average stay at the property guests?

PG: The average length of stay for international visitors is around 7-8 days; regional visitors from the Gulf spend around 3-4 days.
BTN: Who is your main competitor and what differentiates the Savoy’s from other five starts properties in the region?

Being independently owned and managed, I believe we have the potential of being able to proactively assess our customers’ needs and address such requirements in a timely fashion. I intend to make doing business with Savoy Hotels & Resorts International both easy and enjoyable, and this along with the product differential will be unveiled just prior to the WTM this November.

BTN: Are you affiliated with any hotel associations (eg. Great Hotels of the World)? If so can you tell me about some of the benefits of that affiliation?

PG: Having worked in Dubai from 1991-1997 and since then, visiting it every year for the Arabian Travel Market, I find this Emirate truly remarkable.
Dubai has no boundaries as far as I am concerned. Whenever a new tourism concept is launched, people say “no, impossible - it will never work!”, or “there are already too many rooms - it can never be!”. But time after time, these same people are proven wrong.
Dubai without doubt, is influencing the hospitality business. The main players in the hospitality industry now, more than ever look towards this Emirate for inspiration and innovative ideas that can be emulated   in other destinations. People used to look to the Far East for such ideas, now it is the other way around.
BTN: What sets Sharm El Sheikh apart from other Egyptian destinations? Is the infrastructure in place for a surge in tourism?

PG: First of all , with the exception of Hurghada , Sharm El Sheikh is considered as Egypt’s ” all year round” destination when compared to the others which operate seasonally. Secondly with it’s pristine coastline Sharm El Sheikh is reputedly the world’s second most favoured diving destination. Its amazing array of marine life and coral formations found a mere 5 meters from the shoreline can seldom be found anywhere else in the world.
In terms of infrastructure, I believe that Sharm El Sheikh currently has all that it needs for supporting existing tourism projects and those planned for the next 5 years. This will be further complemented with the extension of the new Sharm El Sheikh Airport in 2006.

BTN: Is the Internet an important distribution channel for the Savoy?

PG: Absolutely. However, it has to be managed effectively and continuously.
BTN: How important is it to offer guests wireless internet services?

This is becoming a pre requisite for any international hotel. Currently the Royal Savoy is completely wireless along with 140 Savoy rooms. The remainder of the Savoy rooms will be wireless by the end of 2005.
BTN: During a recent stay at the Savoy, I noticed that the staff are hugely male dominated. Do you think the hotel needs a female touch? If so how can you address this matter?

PG: I agree that there is a need to increase the “feminine touch” and we are currently looking at new ways of attracting and growing the number of female’ associates.
In October we will be opening a new staff complex which will also provide a separate female wing. This is one of the ways in which I believe we can address the imbalance.
Savoy Hotels & Resorts International places a considerable amount of importance on human capital and the general well being of its employees .
Our associates will soon enjoy some of the best facilities available in the region. After all, they are truly our most important asset.

BTN: What will be your relationship with the new Sierra once its doors have officially opened? Will the 2 hotel cross promote one another?

PG: Both Sierra & Savoy are managed by Savoy Hotels & Resorts International, and due to their proximity, we will eventually share common services. These will include telephone and reservation systems, purchasing, finance, housekeeping and engineering. With our expansion plans for the Sierra , we will eventually have 1000 rooms by mid 2007. Each component will enjoy its own identity and a product differential whilst allowing flexibility and accessibility throughout the 2 resorts.
——-