The Radisson Stansted opened its doors to the world on the Aug. 15 of this year. Being the first Radisson to actually be owned by the company it is something of a special property in the ever-expanding company’s portfolio. Rezidor SAS open up a new hotel every nine days. Quite an achievement, quite a rate of development. The Radisson Stansted is set to change the face of airport hotels - not least because of its 12 metre ‘wine tower’ and the ‘angels’ that live in it (well not quite.) Ben Kilbey looks at the hotel and what sets it apart from the crowd.

On first site the Radisson is different. Its architecture reflects the glass openness of the airport itself. It juts from the ground like the sail from a ship, or perhaps the wing from a plane. As you enter the revolving doors a couple of things grab you. One, the fact that the check-in counters are formatted in a concise and intelligent manner and, two, a huge glass edifice slap bang in the centre of the auditorium. At first it is difficult to grasp just what the tower is. On closer inspection and with the assistance of the ‘wine angels’ enclosed within, it is possible to discover that this is indeed a ‘wine-tower.’

Having never seen such a construction before (there are only two in the world, the other being in Las Vegas) it was intriguing, bewildering and more so flabbergasting on first sight. It is without doubt the key attraction to the four star property. The tower plays host to thousands of bottles of wine. You simply order your choice from the well-rounded menu on offer and then let the ‘angels’ do their thing. The acrobats who act their role as ‘wine-angels’ were originally part of the show at the Greenwich Dome. Their performance is world class.

The Radisson takes the concept of the airport hotel to a new level. It expands on choice not only of room decoration but also of what and where you can eat. There are three restaurants on offer ranging from a Spanish tapas bar (TaPaell’Ya), which only opens at night, to a stylish New York Bar and Grill offering, as one spokesperson put it, “it offers American style, big hearty portions. The steak is great”  There is also the opportunity to sample stone-baked pizza in Filini’s. 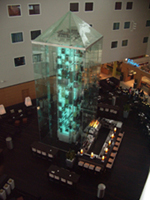 One of the great charms of eating at the hotel is the fact that you can eat wherever and whatever you so desire. For instance if you want to sit and admire the 4000 capacity ‘wine-tower’ whilst dining on a mighty Rib-eye steak while your partner craves a stone-baked pizza and the kids a variety of tapas - well go ahead. You can mix and match your evening to what the restaurants have on offer.

The hotel features 500 rooms and wireless LAN access throughout which is essential for the modern day traveller. This is all grouped together with 1,300 m of meeting space. The largest of the meeting rooms is aptly coined the Essex room and can accommodate 300 delegates. It can be partitioned off to create three individual rooms.

One of the key features of the meeting space is the bar area - complete with a wide screen plasma TV. As General Manager Mark Willis pointed out, “this is perfect for the end of a session and lets say the football is on - instead of wheeling a television in as may have happened in the past and having to have beers ordered in from another part of the hotel - everything is together in one space.” I would have to agree. The hotel is really well mapped out.

(One of the only bad pieces of design I noticed was the positioning of the disabled rooms. For some reason there were some on the top floor miles away from the lift.)

Outside each meeting room there is a video screen displaying who is in the meeting - making it hard to make the usual excuse for lateness - ‘I couldn’t find the room sir!’

The 500 rooms are designed in three unique styles - Chilli, Ocean and Urban - providing a choice of accommodation to suit travellers’ preferences. Chilli is some what O.T.T with bizarre prints and a feeling of ’ we are trying a little too hard here to be cool’ yet the fittings are of a high standard and if that’s ‘your bag’ then, well, go for it. The rooms are decked with red furniture and dark wood.

Ocean reflects the calm of the sea with blues and jade greens. The colour is nice and ocean-like but the position of the bed (off set and diagonal across the room) makes the room feel smaller then the rest (even though all rooms are exactly the same in dimension) and makes viewing the plasma TV (standard in ever room) from the comfort of your bed rather difficult.

Urban features more contemporary colours and is by far my favourite of the three choices. It is stylish and comfortable - imagine the Sony Eriksson or new Baileys ad and you are almost there. The rooms are adorned with quirky furniture and, as the blurb reads, ‘perfect for today’s travelling chic and trendy!’

All in all the Radisson is a market leader in its class. It transforms the face of the airport hotel and with the assistance of a rather fantastic ‘wine-tower’ takes ordering a bottle of bubbly to another level. 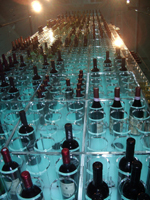 It is in a great position with the world’s fastest growing airport and is the only hotel allowed to be positioned on the grounds themselves. With introductory prices at 105 pounds, expect these to go up to 140 in time, it offers great value for money. The ‘wine-tower’ is worth the charge in itself (almost.) What more is there to add except ‘let the angels free - let the wine flow.’ If you are off on weekend away go get yourself a room.

Filini:
Expect to pay around 7.50 - 9 pounds for a pizza or pasta dish

Breakfast is an amazing buffet of 90 different choices and is an event in itself (dont miss out on the five minute boiled eggs - perfection.)