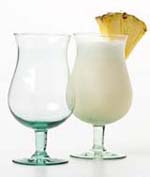 Summers here and it’s time to roll out the funny stories on offer. This is certainly one for all the cocktail fans out there. Caribe Hilton has much to celebrate this year: in addition to a development project that will make the resort the largest in Puerto Rico, Caribe Hilton is celebrating the 50th Anniversary of the Piña Colada and its place in history as the resort where the popular, tropical drink was born! To ring in the 50th Anniversary, Caribe Hilton was recently honoured by Rums of Puerto Rico with a signed proclamation from Governor Sila Mar’a Calderón.
Ramón “Monchito” Marrero was also recognised on the proclamation for his creation of the Piña Colada in 1954, during his days as a bartender at the resort.
After three months of experimentation, Mr. Marrero finally settled on the Piña Colada, which he felt captured the true flavors of Puerto Rico.
He continued to serve the drink at the Caribe Hilton for 35 years after its creation and was rewarded for his efforts in 1978 when Puerto Rico named the cocktail its national drink.
——-