Fred van Eijk, CEO of the Qatar Tourism Authority (QTA) tells ITN about how Qatar is being transformed and promoted as a niche tourism destination.
Launched in 2000, the QTA is a Government organisation that is actively enabling, and supervising tourism industry development in Qatar. The QTA works closely with other government ministries and committees, associations, and the community of Qatar.

Fred van Eijk was brought on to the project to create more awareness for the country as a destination through publicity and promotions. He explains that there was a lot of work to lay the foundations for the organisation, since it is a Government body: “It is not only a marketing authority - it has power for regulations, licences, health and safety”.

With an impressive portfolio of industry experience, van Eijk was headhunted to move to the Middle East. He comments: “I have brought to the QTA an international background and a strong network in terms of hotel contacts. I have been on the other side as a buyer, as a hotelier and as a chief executive for major travel firms”.

“I know what it takes to get a destination into the brochures of a tour operators and into the programmes with incentive and conference organisers”.

Within just a year, the QTA has established a reputable name for the destination of Qatar, attracting thousands of overseas visitors with a dramatic surge in interest from European travellers, and showing a presence at major travel fairs around the world. (Caption: QTA exhibiting at ITB Berlin 2004)

Has the QTA’s tourism strategy been inspired by the successes of Dubai? Van Eijk told me: “We are inspired by many successes and of course Dubai is a very successful development. We have a lot of respect for what they have achieved and can learn a lot from them”. But he added:  “Qatar is not copying or following Dubai. Qatar is much more a niche destination and will always remain a niche destination. It is more about quality than quantity. We have nowhere near as many hotels as Dubai, which makes it a very different destination. He emphasized: “For us it is more about the quality not about the number of visitors.

The QTA are looking to capitalise on the awareness they have created
in both the Meetings, Incentives, Conference and Exhibitions (MICE) segment and eventually the leisure travel market. Having witnessed a heavy demand from conference organisers, Qatar are playing host to some major international events in 2004, including the Annual Conference for the Institute of Travel and Tourism and the forthcoming World Travel and Tourism Council’s (WTTC)  4th Global Travel and Tourism Summitt
, which is to be held in Doha. Van Eijk comments: “The WTTC Summit is extremely important and we are very proud that Qatar Airways is hosting this event which will put Qatar on the map as a destination. This is the biggest event in the international tourism industry in terms of the level of participants and visitors and the support that it gets from the major players and companies”.

Qatar also hosts a range of prominent international sporting events, which have helped to generate a huge interest in the destination. These include the Qatar Masters Golf Tournament, world championship table tennis, power-boat racing, Qatar Airways squash challenge, the ladies and men’s tennis opening and the forthcoming motorcycle Grand Prix

As well as targeting European destinations, the QTA emphasise the importance of the Middle East as a target market itself. Van Eijk explains: “Tourism is a welcome addition to the country. This initiative is also providing good facilities for people who live in the countries”.

Forthcoming developments include four new hotel openings; Hilton and Marriott are planning to open their new hotels in Doha in 2004.

Qatar Airways have signed a US$5.1 billion deal with Airbus to purchase an additional 32 aircraft during the next five years. Van Eijk revealed that the airline has played a major role in marketing the destination; The QTA looks first at the Qatar Airways’ network when considering new locations for tourist board offices.
Qatar Airways have recently announced that they are investing US$2 billion in the construction of Doha’s new international airport, set to open in 2008. This state-of-the-art facility will connect to the newly renovated existing airport by a concourse.
Although nightlife may be a little limited, alcohol is not illegal in Qatar. Van Eijk comments: “Of course it’s a Muslim country and there is a very strong sense of that, but everyone knows how to behave. Once people are with us they feel comfortable and welcome and they know what is right and wrong. Alcohol is served in the restaurants and bars of the hotels. Most of the leisure activities are in the grounds of the hotels so it’s really not an issue. 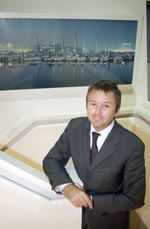 Van Eijk sees technology as an absolute priority. He comments: “We are trying to combine the foundation, tradition and heritage of the country as well as the future, which is hi-tech”.

The Tourism Authority have also launched a new website www.experienceqatar.com, which is an excellent information tool for visitors.

Van Eijk was unable to comment on the total investment structure of the QTA, but he informed me: “Where we feel it is right to spend, we will spend. Of course Qatar airways invests in its expansion and the state of Qatar invests a lot of money in the development of the airport”.

For more information go to www.experienceqatar.com
——-