The unique charm of an artists’ residence combined with extraordinary cuisine, this is Hotel Paradies, the perfect place for connoisseurs, gourmets and guests seeking rest and relaxation.

The hideaway is hidden away from mass tourism and the sound of traffic. It is gracefully situated on one of the most beautiful sunny plateaus in the Alps, with a magnificent panoramic view over the Engadine Dolomites.

The property has just been recognised by the World Travel Awards, with the brand taking the prizes for Switzerland’s Leading Boutique Hotel 2012 at a Gala Ceremony hosted by Conrad Algarve.

Meike Bambach, general manager, Hotel Paradies, commented: “It is a great honour for us to be awarded.

“Hotel Paradies is rather a little hideaway, situated in a little village high up in the mountains and can be considered as an insiders’ tip.

“For this reason it is a great pleasure being awarded Switzerland’s Leading Boutique Hotel in this international contest.”

Art has long had a home here, dating back to 1910, when the painter Hans Walter Beyer was inspired by this captivating environment.

He built a small hideaway in one of the most exquisite locations in the Lower Engadine region, which he appropriately named Il Paradis.

He and his wife entertained their first guests in their living room, which is now the library.

After several ownership changes, in 1966/67 the house was eventually converted into a hotel.

The ship-owning and hotelier family Rahe, from Hamburg, bought the premises in 1995.

After extensive and highly detailed renovations, Hotel Paradies emerged as one of the shining stars in the Swiss hotel galaxy.

In 1986 it became a member of the exclusive hotel association, Relais & Château. 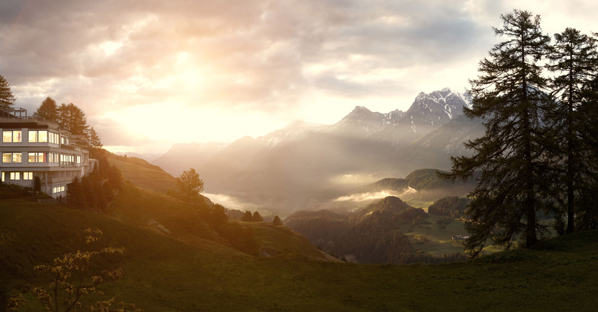 “His highly acclaimed and star-awarded culinary skills are famous far beyond the Engadine borders.”

“We are always working on new concepts.

“Guest are estimating the unique charm, all the little details referring to the region, our hospitality and the excellent cuisine - these are the pillars we are focussing on and we are constantly trying to improve.”

Ftan is situated 1,650 metres above sea level on one of the sunniest plateaus in the Alps.

A picturesque mountain village in the Engadine region, presented in all its natural beauty.

Surrounded by meadows and unspoiled nature, it commands an amazing panoramic view across of the Lower Engadine Dolomites.

The village is located in the canton of Grisons; about ten minutes away from the well-known bathing resort of Scuol and 20 minutes from the Austrian border crossing Martina.

Ftan not only offers wonderful fresh mountain air, but 300 sunny days a year as well.

Paradies Hotel was recognised as Switzerland’s Leading Boutique Hotel by the World Travel Awards at the Europe Gala Ceremony earlier this year.