Hotel chains Marriott and Accor are leading the way in African hotel development.

Overall the continent has more than 75,000 rooms in 401 hotels in the pipeline, according to the eleventh annual survey by W Hospitality Group.

Data for deals which have been realised also show almost 100 hotels opened in Africa over the past two years, with a total of 16,000 rooms coming to market.

W Hospitality’s managing director, Trevor Ward, said: “The growth of the chains’ presence in Africa is a positive story.

“This year’s slight decrease is largely due to them ‘cleaning’ their pipeline, deleting deals that they believe are not going to happen.

“So, while the 2019 total is slightly down, overall there has been growth of 51 per cent in total pipeline rooms since 2015, and in that time, north Africa has grown by 58 per cent and sub-Saharan Africa by 47 per cent.”

Full details will be revealed and discussed at the Africa Hotel Investment Forum  in Addis Ababa, September 23rd-25th, organised by Bench Events.

AHIF, the leading conference of its kind, connects business leaders, driving investment in tourism projects, infrastructure and hotel development across the continent. 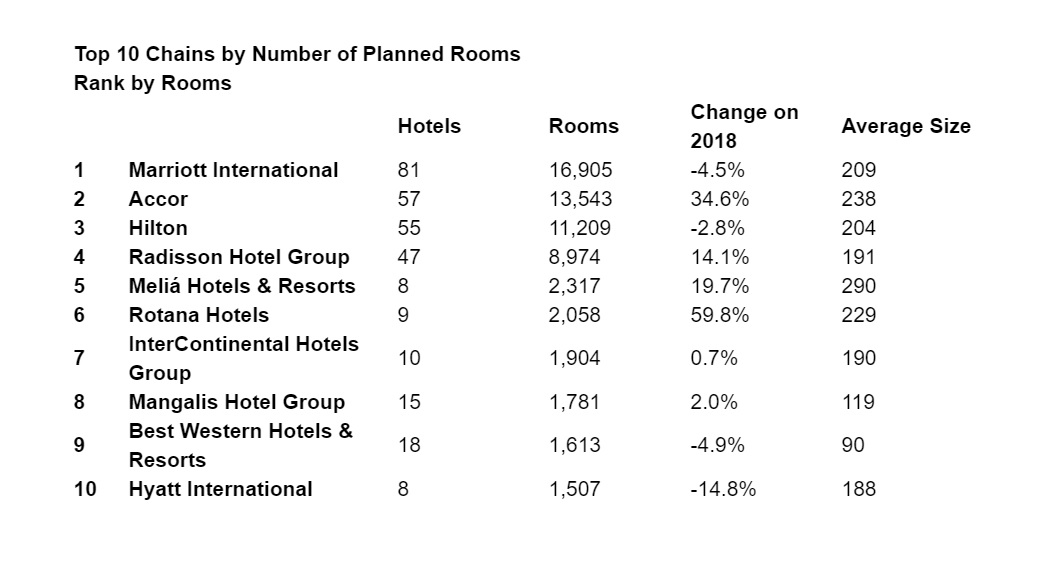 Marriott, the world’s largest hotel chain, has the biggest pipeline in Africa, 42 per cent more hotels and 25 per cent more rooms than second-placed Accor.

Hilton and Marriott signed around 2,000 and 3,600 rooms respectively, but saw a net reduction in their pipelines, due to openings and cleaning.

Ward said: “There are almost 200 hotels due to open this year and next.

“We estimate, conservatively, that they will create around 30,000 direct jobs when they open, with some commentators estimating that each wage earner supports five other family members.

“And indirect and induced employment could total another 150,000 people.”

Chairman of Bench Events, Jonathan Worsley, said of the 2019 survey: “It’s only through such knowledge and transparency that participants in the industry can execute its strategic plans for growth.

“With the huge growth in the number of deals signed by the chains, Africa is today on the agenda of virtually every major hotel company.”