South Africa has hosted the Rugby World Cup, the Cricket World Cup and this summer will welcome the FIFA World Cup finals. In its bid to become a sports tourism powerhouse, football’s biggest event can be the springboard to fulfil the country’s massive ambitions. By Mike Starling

The stadiums are nearly ready and the new hotels are getting the last lick of paint. It’s 2010 and time for South Africa to make history by hosting the FIFA World Cup finals.

When the tournament kicks off between Bafana Bafana and Mexico on June 11, the match will herald years of hard work and preparation. However, the country’s tourism board, South African Tourism (SAT), says don’t believe that the World Cup is the end-game.

In an exclusive interview with Breaking Travel News, Sugen Pillay, SAT’s global manager of events, has revealed the World Cup is just the start for South Africa’s sports tourism development.
Not content with hosting rugby and cricket’s equivalent showpieces in 1995 and 2003, South Africa will use the facilities and experience of the football World Cup to bid for other sporting events.

“One of the big legacies of the World Cup will be to position South Africa as an events and sports tourism destination – it’s an opportune time for us,” Pillay said.

“Sporting events have a captive audience that travel around the world. We are currently working to develop a sports tourism strategy for South Africa to capitalise on the opportunities that we will enjoy from this World Cup. Sport is critical for us in boosting the tourism industry.

“We need to bring in more international events which attract around 7,000-10,000 people – this is vital. These are the events that South Africa will be aiming to host in the years after the World Cup.

“One thing that we have managed to demonstrate is that we do have the capacity and ability to host major events quite successfully.”

The tourism board’s aggressive strategy may sound ambitious in a time of economic difficulty, but SAT has revealed sport has been the main reason that the country’s tourism industry has progressed during the recession.

“I think sports tourism is critical, even in the context of a recession,” Pillay added. “If you look at our track record from the time we held the Rugby World Cup and the Cricket World Cup, we have seen tourism grow because of those major events.

“Last year was quite unique in South Africa. We held a number of major international events, starting off with the Indian Premier League, the Confederations Cup, the British and Irish Lions rugby tour and then the ICC Champions Cricket trophy. Those events happened in a climate of economic recession.

“Had it not been for those events our growth in tourism would have been pretty low. We think that sport events, even during an economic recession, are good for our destination.

“We have seen evidence that a lot of sports fans – rugby, soccer or cricket fans – travel irrespective of a financial crisis.”

In fact the South African finance minister Pravin Gordhan predicts the World Cup will help the country’s economy grow by 2.3 per cent in 2010.

For 30 days this summer, South Africa is expecting more than 400,000 people for the World Cup.
So is Africa’s first hosting nation ready for the influx of football fans? Pillay certainly thinks so. “Our stadiums are almost complete, most of our infrastructure is also nearly complete and there is no shortage of quality accommodation.

“But for the first time FIFA has agreed for the hosting country to use non-graded hotels, and that will mean there will be two-, three-, four- and five-star quality accommodation available to travellers.

“South Africa will be able to accommodate one million people during the World Cup month. There is no shortage of quality accommodation.”

Speaking ahead of its summit on tourism, sport and mega-events held last month in Johannesburg, the United Nations World Tourism Organisation (UNWTO) secretary-general Taleb Rifai agreed that the World Cup has the potential to be a historic landmark for Africa.

Rifai said: “There is already a change of image about Africa – and this will be a great opportunity to showcase the continent.

“South Africa is doing a great job in that sense and the positioning of making the World Cup finals an African event rather than just a South African event will help the continent raise its profile.

“The question is how to make the moment stay? It is really important to take advantage of the World Cup and pass on the message of the really good things in Africa.”

The UNWTO is working closely with countries to promote sport as a tourism driver and a boost for the economy. Rifai added: “Sports tourism is something the UNWTO has promoted. It was actually approved in our last general assembly in Astana last October as a goal in the road map to recovery.

“One of the recommendations of the road map is to take advantage of major events such as sports. If you do so, you are investing in an infrastructure.

“The economy needs investment – so sport can be an investment that’s safe for the future, can be used for future events and can create jobs and economic movement. This is one of the areas where the UNWTO is looking to develop.

“Sport is becoming very important as there are two ways to look at it. On one side there is sport as an activity: people that travel to get involved in some sort of sporting activity – golf for example - which has become a major tourism product in many destinations.

“Then you have the other approach, which is looking at sports as an event. You then have all the people who travel to attend an event and might stay in or visit a destination. It’s important to see sport in two ways: as a product and also an event.”

Many tourism trade personnel are intrigued to see how the rest of Africa can benefit from the 2010 World Cup. With the continent’s major teams taking part – Algeria, Cameroon, the Ivory Coast, Ghana and Nigeria – the 2010 spectacle provides as good an opportunity for African nations to capitalise.

“The one thing we have been working on with our counterparts around Africa is to use the World Cup as an opportunity to promote the continent,” said Pillay. “For far too long the continent has been associated with negative issues. But there is also a positive side – our tourism attractions, the cultures and the people. These are the things that we will be pushing forward.

“From a trade point of view SAT has been working to promote South Africa with the tour operators on the continent that have not been accredited by FIFA.

“The core markets we have been working closely with are Nigeria, Kenya, Angola and the Democratic Republic of Congo. We find that in terms of arrivals to South Africa, the majority of people who come to South Africa are from mainland Africa. The African market is critical for us.”
With its sports tourism strategy in place, South Africa looks ready – not just for the FIFA World Cup – but also for the years after the event.

When asked what South Africa has to do in order to make sure the World Cup leaves a lasting legacy for the tourism industry, Jean-Claude Baumgarten, president and CEO of the World Travel & Tourism Council, said: “The fundamental advice I would give from my experience is that during a major event a country should immediately start to go close to the trend.

“The tour operators, the airlines and the hospitality businesses must create a campaign during and immediately after the event so that you don’t have that ‘grey’ period.

“There is a lot of energy in hosting a major sport event and you should not lose that energy and not have, what I call, an ‘Olympic hangover’. That happens very often.

“This is something I will advise strongly for South Africa, they have a great opportunity with the World Cup. But it must be a springboard and immediately afterwards they must take advantage of this event.” 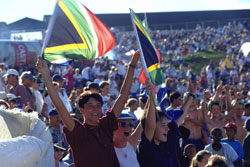 When South Africa hosted the Rugby World Cup, the fairytale story was immortalised by Hollywood in the film Invictus, directed by Clint Eastwood and starring Morgan Freeman and Matt Damon.

If the 2010 FIFA World Cup creates as much passion and impact as the Springbok’s victory did in 1995, another blockbuster could be on the cards.