As the Queen’s Diamond Jubilee celebrations sweep the nation this weekend, London‘s airports have been welcoming thousands of international visitors who are descending to the capital city to enjoy the celebrations.

Gatwick Airport hosted its very own British-themed street party to welcome the guests that who travelled through Gatwick today.

Scots Guards, Pearly Kings and Queens, a brass band and a bagpiper are among the British themed activities which have been entertaining passengers.

Paul Fitch Head of Terminal Operations at Gatwick Airport said, “We are very excited to be celebrating the Queen’s Diamond Jubilee and providing the very best passenger experience for all visitors to Gatwick - a focus only heightened during what will be an historic 2012.

“Over the course of the bank holiday weekend (2 - 5 June) we are expecting around 400,000 passengers to travel through Gatwick. Our commitment is to treat every passenger as our guest - which is especially important to us as we’re set to welcome over 110,000 passengers to Gatwick on Friday 1 June - the
perfect day for a Jubilee knees up.” 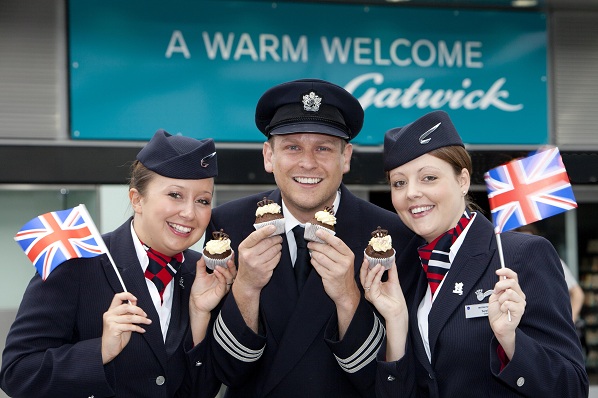 This is not the first Royal occasion Gatwick has celebrated. In 1958 Her Royal Highness Queen Elizabeth II officially opened Gatwick following a £7 million renovation project which saw Gatwick become the world’s first airport to combine mainline rail travel, road and air terminal services from one terminal. Then in
1988, she returned to Gatwick to officially open the new North Terminal, which connected to the newly named South Terminal by a new automated track transit system.

Today, under new ownership, Gatwick is continuing to improve the overall passenger experience of the airport as part of its £1.2 billion investment programme, from the moment passengers arrive at the front door, check-in and pass through security to when they board their flight.

This weekend marked the official opening of Gatwick’s new South Terminal welcome entrance following the completion of a £31 million project. The spacious, light entrance area and the newly created zones for cars, taxis, buses and coaches are now allowing passengers to travel directly to and from the terminal building with much greater ease.

Meanwhile Heathrow was expecting 780,000 passengers expected to arrive in the UK between over the long weekend.

More than 2.9 million passengers are expected to pass through the airport in the next two weeks - Friday 1st June was Heathrow’s busiest day for arrivals, with over 103,000 passengers booked to fly through the UK’s only hub airport.

A Heathrow spokesperson revealed to BTN that they were expecting a high volume of visitors from America, specifically JFK airport, Dubai, Amsterdam and Frankfurt in particular.

To mark the milestone and Heathrow’s role in six decades of regal globetrotting, a giant Union Jack flag with an image of Her Majesty the Queen takes pride of place on Heathrow’s runway.

At 540 square metres, the artwork is three times the width of an A380’s fuselage and has been positioned so that passengers will be able to spot it from their flights, with Her Majesty’s profile overlooking the runway and terminals. 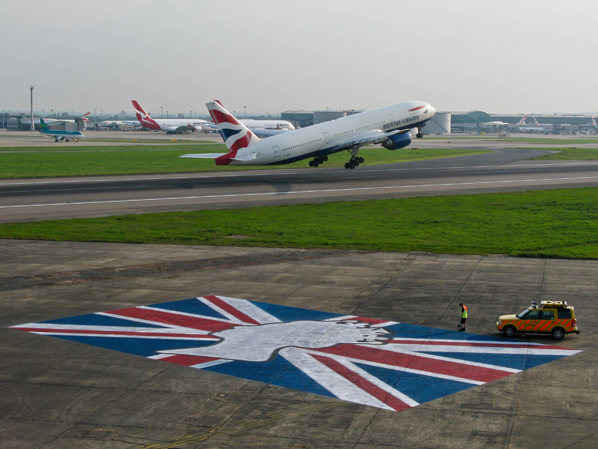 Passengers have also been treated to a royal welcome with red carpets laid in Arrivals halls in all terminals. Official Diamond Jubilee and Union Jack flags will be handed out and visitors will be invited to write messages of congratulations to the Queen in official books that will be sent to Buckingham Palace. In addition there have been live musical performances in the terminals by a variety of musicians including the Salvation Army band.

As the most travelled head of state in the world, having made 261 official overseas visits and 96 state visits to 116 countries, Heathrow has played host to some important moments in the Queen’s 60-year reign. Her Majesty also opened the original London Airport buildings, which later became Terminal 2 in
December 1955. In 1968 she returned to open Terminal 1 and again in 2008 to open Terminal 5.

John Holland-Kaye, Heathrow commercial director at Heathrow said: ‘The Queen’s Diamond Jubilee celebrations mark the start of an important and historic summer for Heathrow. As the UK’s hub Airport, we are delighted to welcome thousands of visitors to Heathrow to celebrate this momentous national occasion.’

Eurostar has reported a 30% surge in bookings around the Queen’s Diamond Jubilee weekend, compared with the same period last year and an 18% increase, compared to the Royal Wedding weekend in 2011.

Friday 1 June, was Eurostar’s busiest day with over 30,000 passengers travelling between the UK and mainland Europe on that day alone. To meet this heightened demand Eurostar is adding 10 extra services, but with tickets selling fast travellers are encouraged to book quickly.

As tens of thousands of people are set to visit London for the Jubilee celebrations, some Brits are taking advantage of the extended bank holiday and the recent strengthening of the pound against the euro to enjoy a long weekend away.

Nick Mercer, Commercial Director for Eurostar says: The Queen’s Diamond Jubilee will start a once in a lifetime year of celebrations for the capital, with the
London 2012 Festival and the London 2012 Olympic and Paralympic Games this summer. London is the hottest destination this year and it’s fantastic that so many people from across Europe are travelling with us to join both the Jubilee and Olympic celebrations.

“At the same time, for those Brits who want to take advantage of the Jubilee double bank holiday, there’s still time to book that trip to Paris, Avignon, Lyon, Bruges and many more destinations with the extra services we’re running.“