While London, New York, and Los Angeles have played host to countless movies over the last century, a few locations have shone even more brightly.

Here Breaking Travel News junior editor Chris O’Toole takes a look at some of the smaller locations which seized their moment in the limelight.

Now running to six films – with the release of Rocky Balboa in 2006 – the Rocky Franchise has taken in many famous locations. Training montages include innumerable scenes around Philadelphia (Rocky), Jackson Hole, Wyoming (Rocky IV) and Madison Square Garden (Rocky V).

Even the Biltmore Hotel in Los Angeles – where Rocky prepares for his bout with Clubber Lang – makes an appearance. But, even with this illustrious heritage, it is the Rocky Steps which have become a global tourism success.

The 72 stone steps to the entrance of the Philadelphia Museum of Art in Philadelphia, Pennsylvania have been given the moniker following their appearance in the triple-Oscar-winning original film ‘Rocky’ – as well as sequels Rocky II, III, V and Rocky Balboa.

During the films, the eponymous lead character runs up the steps to tune of Gonna Fly Now – prompting countless imitators to follow in his footsteps. A statue of Rocky now awaits visitors at the bottom of the steps – making it a great location for fans to have their picture taken.

Awfully Nice tours offer a jaunt around the sites seen in the films.

Still in the United States, Twede’s Cafe is perhaps better known to the wider world is the Double R Diner from Twin Peaks.

This quintessentially American restaurant caters to hundreds of weary travellers each month as they retrace the footsteps of FBI special agent Dale Cooper as he investigates the murder of high school prom queen Laura Palmer.

Most famous for its cherry pie and coffee – served as black as a “moonless night at midnight” – Twede’s still thrives on the association with the cult series. An annual jamboree sees visitors from across the world descend on the location to celebrate the cult series – a must for any David Lynch fan.

Granted, New Zealand was a popular tourist destination before the Lord of the Rings Trilogy rolled into town, but the impact of the multi-billion dollar franchise has been nothing short of revelatory for the island nation.

All three episodes were filmed exclusively around the South Pacific islands, with Peter Jackson and his crew resident for over two years. Now – following the Oscar success of the films – the New Zealand tourism authority has moved to support the ongoing cottage industry, offering a guide to places of interest on its website.

Highlights include the jewellers in port-city of Nelson where the ‘one ring’ was made, as well as the scenic Takaka Hill, which doubled as Chetwood Forest during filming. More adventurous visitors can take a helicopter to visit Dimrill Dale – played by Mount Olympus and Mount Owen.

A host of operators – including Lord of the Rings Tours and Trilogy Trail - offer tours around the region and - with the franchise set to be revitalised in the near future, with the production of the dual Hobbit prequels set to begin - demand shows no sign of slowing down.

While derided by any number of higher-brow critics, Sex and the City 2 was warmly received by the franchise’s army of loyal followers – many of whom will now be flocking to Morocco as a result.

While apparently set in Abu Dhabi, the non-New York sections of the sequel were in fact filmed in Morocco, after Emirati authorities refused clearance for filming. Thus Marrakech doubles as the colorful backdrop of the film, with Carrie and co seen waltzing through the souks and monuments of historic Marrakech.

Demand is expected to soar this summer, with Kuoni offering guests a few ideas on where to visit.

Although the small southern Swedish town of Ystad can trace its history to the 13th century, the 17,000 strong community is known to the world as the home of fictional detective Kurt Wallander.

The popularity of the novels - written by Henning Mankell – and subsequent films have encouraged thousands of visitors to head for the sleepy town, with local authorities responding with a new film museum and popular walking tours.

Kenneth Branagh also reprised the role for the BBC in 2008 – producing three films: Sidetracks, One step behind and Firewall – subsequently reinvigorating interest in the town.

The latest installment of the series – The Twilight Saga: Eclipse – recently received the largest domestic American release in box office history, capping a meteoric rise for the vampire franchise. But where did the Twilight drama begin?

The rainy town of Forks, that’s where.

While filming for the series is actually carried out in Oregon and British Columbia, it is the small Washington town of Forks which has come to reap the benefits of the supernatural craze – with fans from around the world flocking to the wooded location. The local chamber of commerce has even established a dedicated website for visitors looking to follow in the footsteps of Bella Swan and Edward Cullen.

The Eclipse installment also takes in locations around Vancouver and Seattle – throwing the potential tourism net even wider as fans scout for the featured locations.

A location has perhaps never been more central to the narrative of a film than in the 2008 black comedy In Bruges. Aside from the title, the city takes the starring role, with the Belfry becoming a key location as the action develops.

Indeed a second film – starring dwarf actor Jimmy (Jordan Prentice) and again utilising the storybook location – is being produced within the original title, adding further importance to the city location.

While the fate of the films key protagonist remains unclear as the closing credits role – the city is a clear winner. Thomson offer holiday ideas in Bruges for those who had their appetite whetted by the BAFTA award winning film.

A beautiful medieval location in its own right, Alnwick Castle is perhaps more famous as the real-life exterior of Hogwarts School of Witchcraft and Wizardry in the first two Harry Potter movies.

While the Northumberland property is also a living castle, at the heart of thriving estates and businesses, guests now flock to relive the magic of the Potter franchise. Thousands of younger visitors enjoy dragons, wizards and Potter-inspired magic while well-informed guides lead older groups around the beautiful surrounds.

Take a look at the Alnwick Castle website for more information. 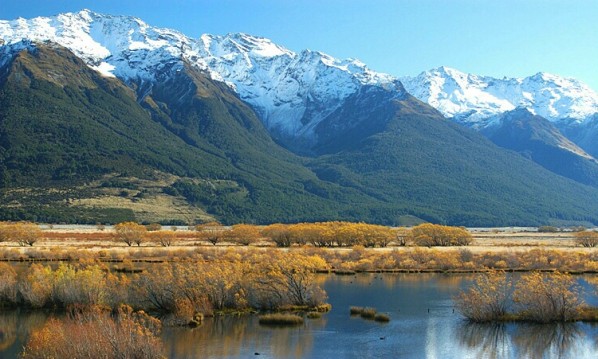 New Zealand - Lord of the Rings

Nearly half-a-century since the release of the original, the Sound of Music still captures the public imagination like few others musicals.

Over a quarter of a million visitors each year head for the hills around Salzburg, Austria, to retrace the footsteps of Julie Andrews as she sings Do-Re-Mi. Those looking to take their own personal snapshot can check out Panorama Tours.

A cheaper option might be to head to the Sing-a-long-a Sound of Music at the Prince Charles Cinema in London, where fans of the film gather once a month to indulge their passion.

When ten coordinated terrorist attacks struck at the heart of Mumbai, India’s international heart, tourism insiders argued the market could take a decade to recover.

With two of the city’s most prestigious properties - Oberoi Trident and the Taj Mahal Palace & Tower – hit, not to mention tourist hangout Leopold Café, fears were for the worst.

But just two years later – with both hotels set to reopen this year – the popular destination of Mumbai is thriving once again.

While the enduring popularity of Mumbai cannot be solely attributed to the film Slumdog Millionaire, the image of the city is unlikely to have suffered from the eight-Oscar winning showcase.

Although no fairytale, the redemptive plot and feel good ending of the movie – all set against the backdrop of Mumbai – have seen the city regain its place on the international tourism and business trail quicker than many could have hoped.